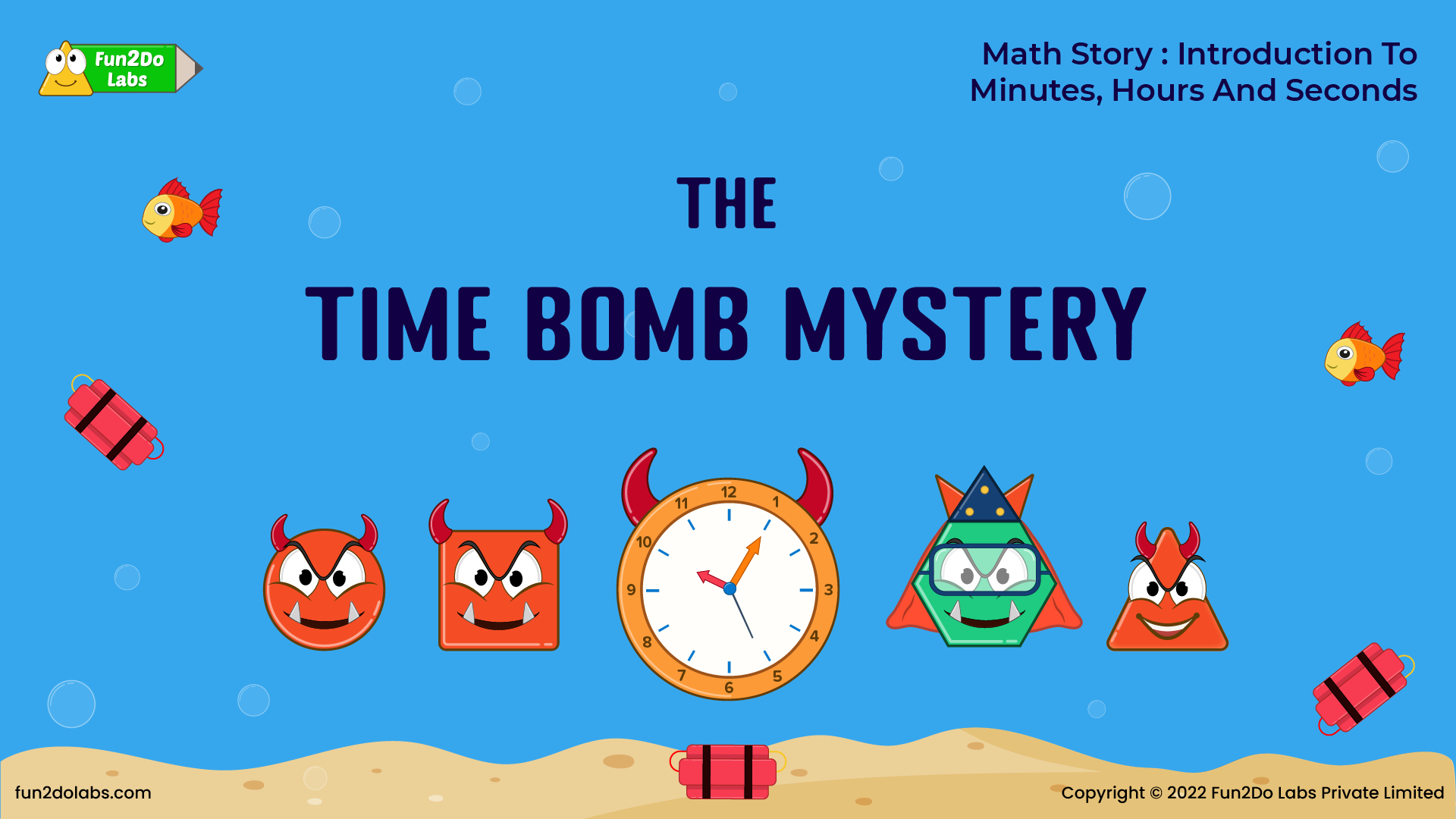 “Argghhh! My army is filled with losers! You all could not defeat 4 kids and one teacher! Nonsense! I will only have to do something now. Something big! Very big! Hahaha! After all, I am Uncle Bad, I  will make everyone sad!” says Uncle Bad. He wishes to rule the Fun galaxy by hook or crook.

“This time, I will do something that is going to scare Triho and Uncle Math so much that they will never come in my way. Haha!” he says. “But, what are you thinking boss?” asks Atriho  Boss hesitantly. “Loud! Louder! Loudest! The sound will scare them like never before! I am Uncle Bad, the future king of all evil!” he says.

“Atriho  Boss, I want you to design the best time bombs! Acirho  Boss and Asquarho Boss, you will quickly connect all the bombs and hide them underwater! We are going to burst the entire Earth this time. And the blast will happen underwater! A place that’s never under anybody’s attention! Haha!” says Uncle Bad. “Hail Uncle Bad! We can make everyone sad!” say the boss villains.

Atriho  Boss is designing the best time bombs in his advanced lab. “I got it! I got it! Boss will love this”, he says. Acirho  Boss and Asquarho Boss are excited too. They rush to show his time bomb to Uncle Bad.

“Boss, this is my time bomb. I call it Mr Evil Clock! It has three important hands: Seconds, Minutes and Hours. Every time each of these moves, a connected bomb will burst underwater. Do you know what is the best part? Seconds move the fastest, minutes move after 60 seconds and hours move after 60 minutes“, explains Atriho  Boss. 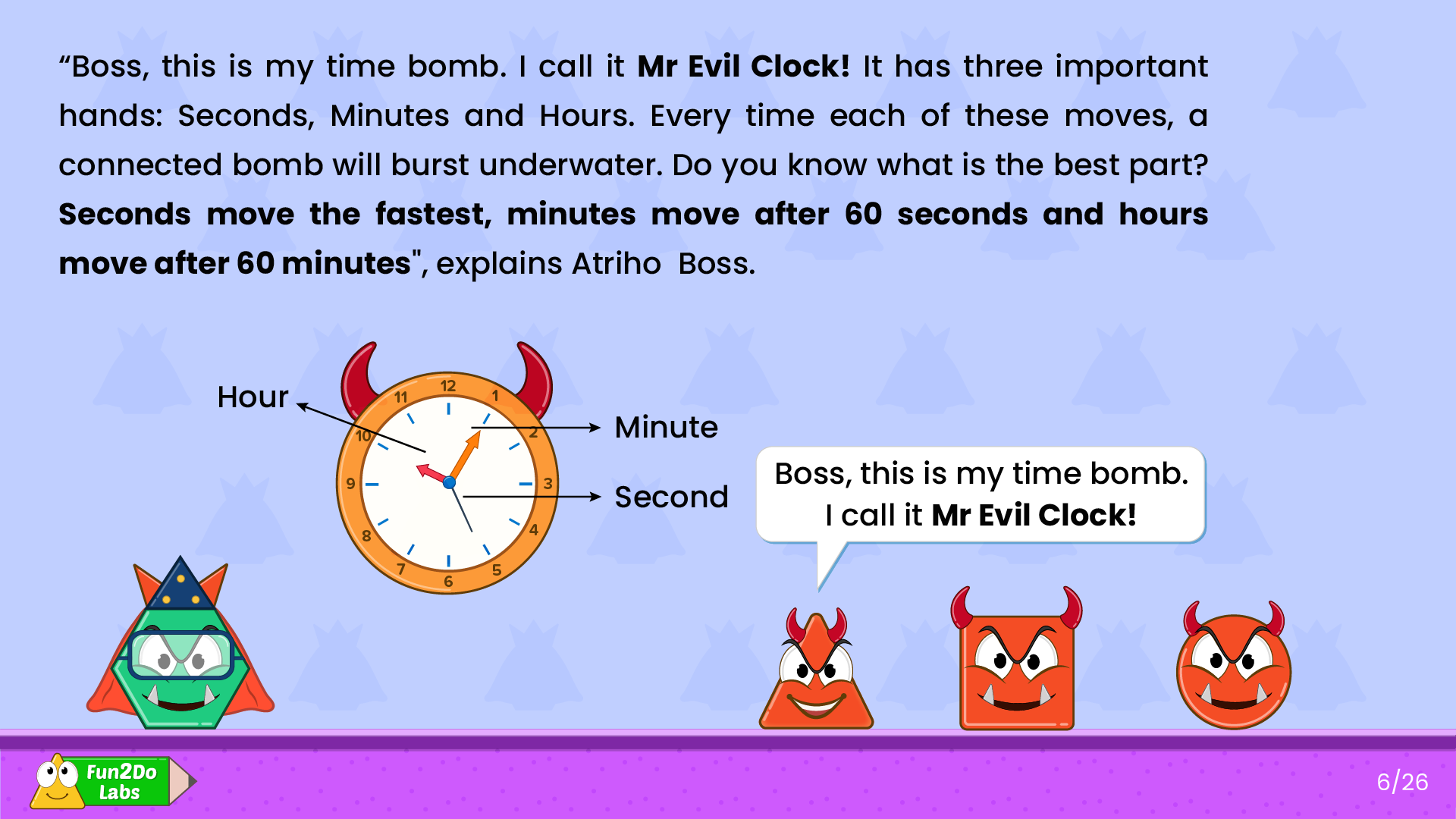 Uncle Bad and the Boss villains are on their task of spreading the time bombs in the ocean. To travel underwater they are using their special submarine. Will Uncle Math and the kids save the planet this time? 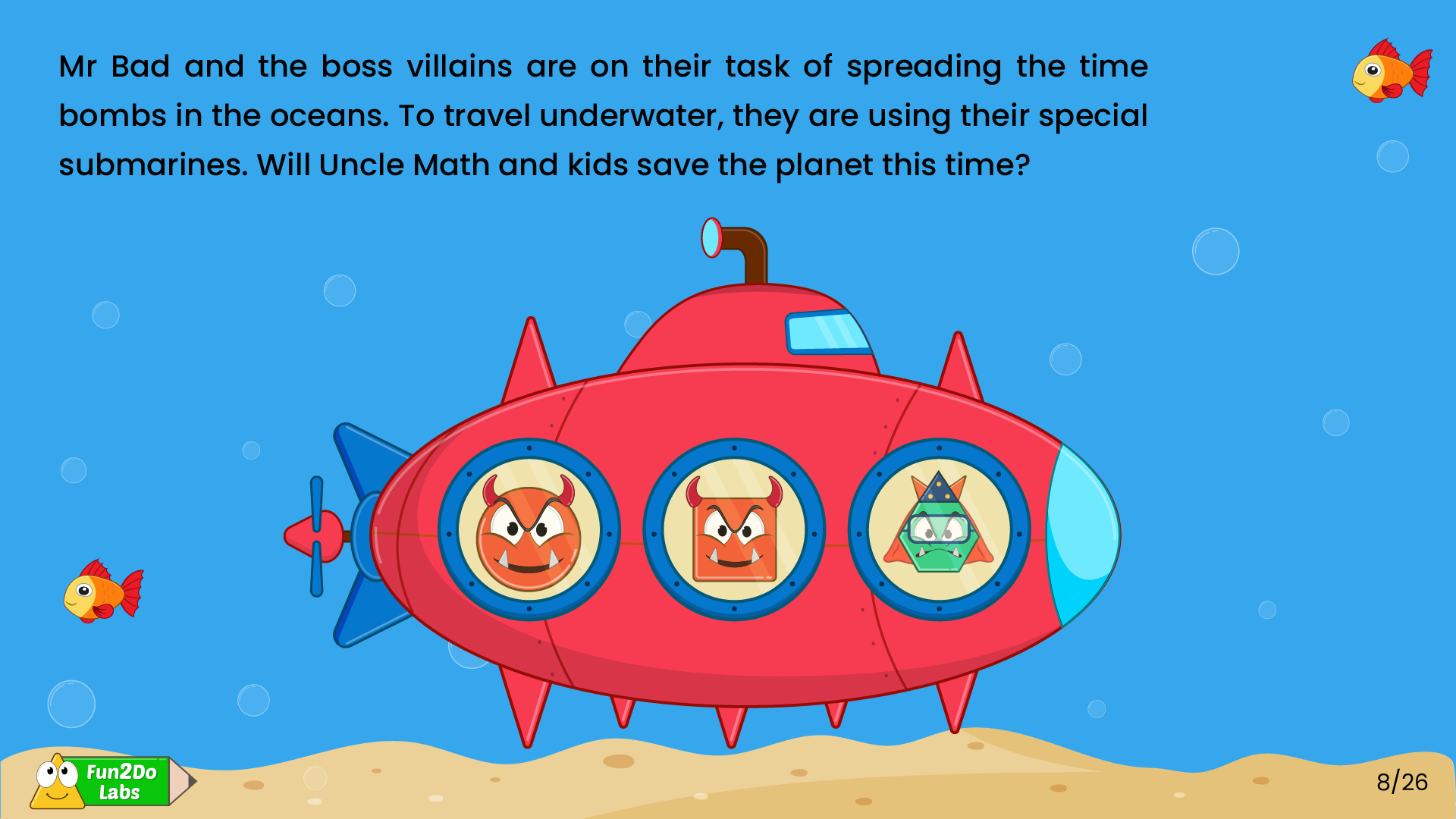 Soon, Mr Messenger gets to know about the time bomb attack. He immediately informs Uncle Math and the kids. “We need to save our planet! Uncle Bad cannot win this time”, says Triho. “Are we going to die? Is this the end?” says scared Cirho.

“Let us not panic. Instead, we will stop for some time, calm down, identify the problem, consider the alternatives, make a choice and reevaluate”, says Uncle Math. “Let us stop the boss villains”, says Squarho. “No! Let us go and face Uncle Bad directly”, suggests Cirha. The kids are thinking of various solutions.

“The best thing to do now is to stop the time bombs. We could fight Uncle Bad and his army later”, says Triho. Everybody agrees with him. “But how do we do this?” asks Cirho. “No fear when I am here”, says Uncle Math. It looks like he has a plan. “Follow me!” he says.

Uncle Math takes everyone to a submarine dock. “This is our submarine! It will help us travel underwater and spot the bombs. We will diffuse them and defeat Uncle Bad”, he says. Everybody boards the submarine and is ready to leave. 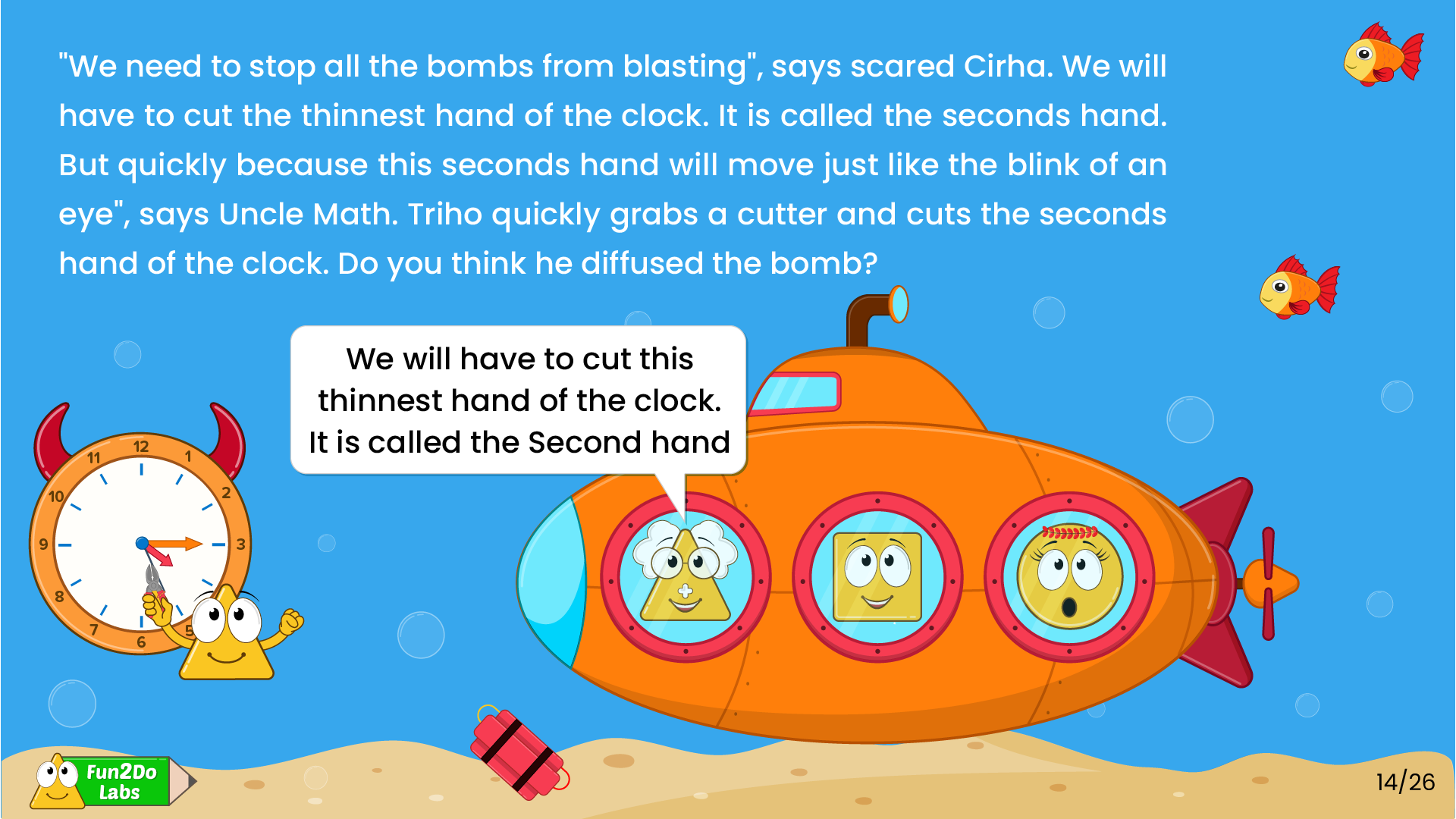 Yes! Of course! “Hurray!” says Cirho. Everybody is relieved. But they have not won the battle yet. “Let us cut the Minute hand this time. It is this bigger hand and it will move after 60 seconds. It is 4:30 now. Before it hits 4:31, we need to cut it”, says Uncle Math.

Triho musters all the courage and cuts the Minutes hand. “Hurray!” says Squarho. They are getting close to winning the battle. 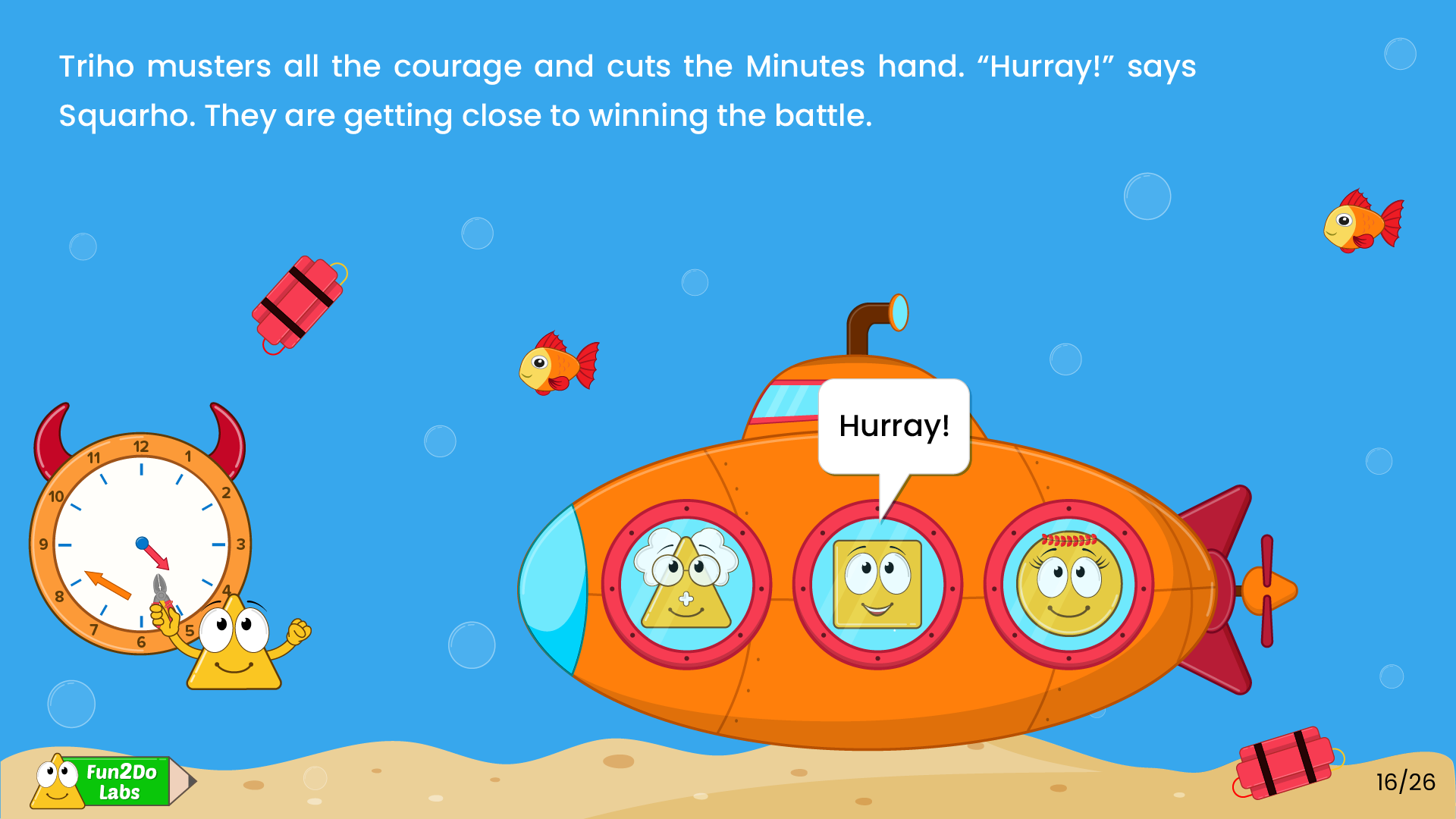 Triho is about to cut the Hour hand, but suddenly they spot another submarine approaching them. Who could be in it?

Oh no! The Boss villains are here! They are here to attack them and make their mission successful.

Boom! Bam! Crash! Zap! A huge fight happens between the kids and the boss villains. Who will win this? Will the kids be able to diffuse the last set of bombs?

“Cirha! There are only 30 seconds left until 5:31. We will stop the Boss villains. You go and cut the Hour hand to defuse the bombs, Hurry up!” says Triho. Cirha does as instructed and decides to rush towards the clock. 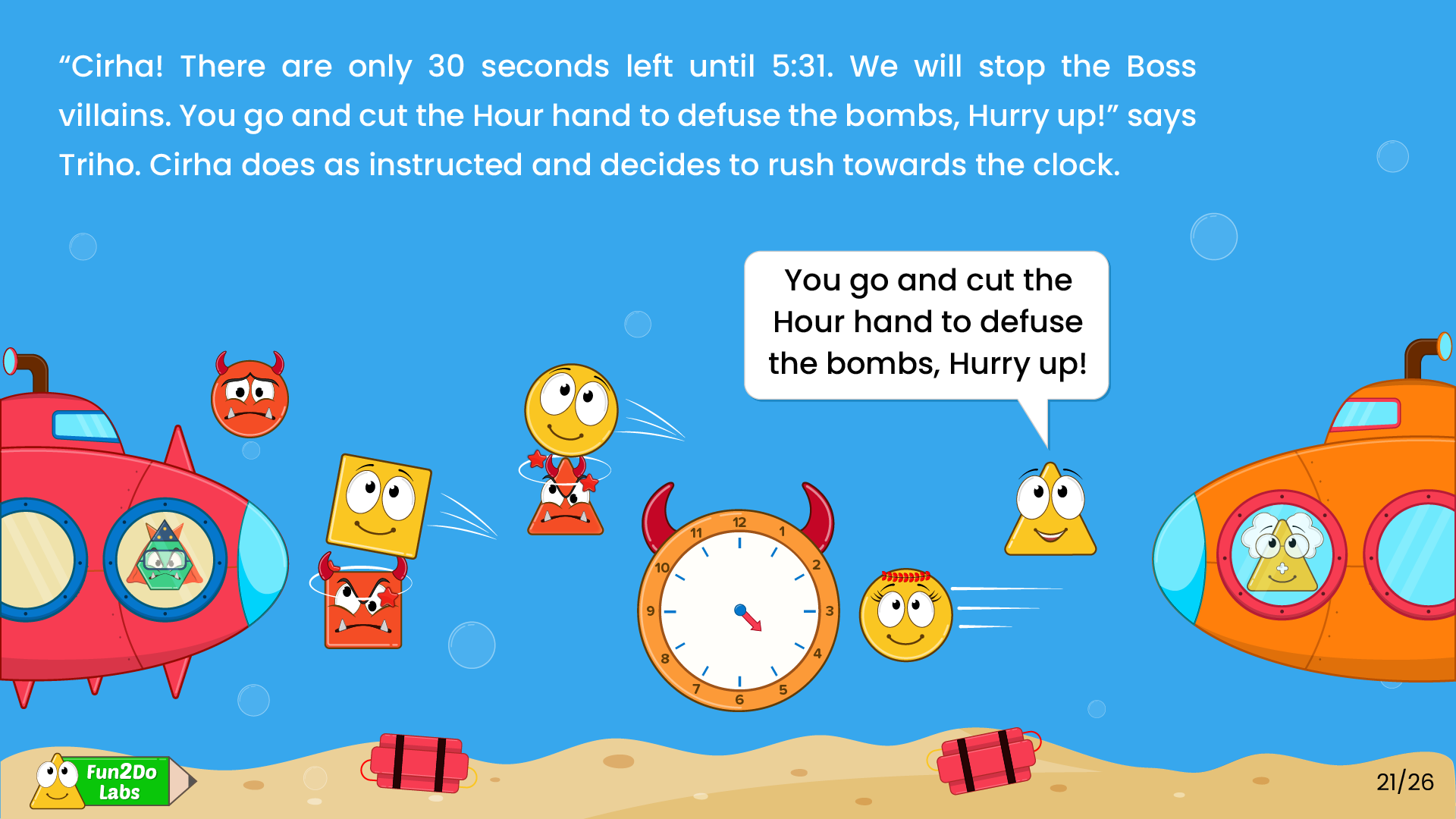 Despite being attacked by villains, she reaches the clock and cuts the Hour hand. “What! Oh no! We have lost it!” say the Boss villains. Once again the kids and Uncle Math managed to save the planet and people from evil.

Uncle Bad gets to know about the defeat. “Arggh!! Triho and Uncle Math! I will come back stronger! After all, I am Uncle Bad, the future king of all evil!” says Uncle Bad and he leaves.

Everybody celebrates the victory. Staying calm, making responsible decisions, being courageous and loving their home helped them defeat Uncle Bad and his army. Indeed a purposeful day.