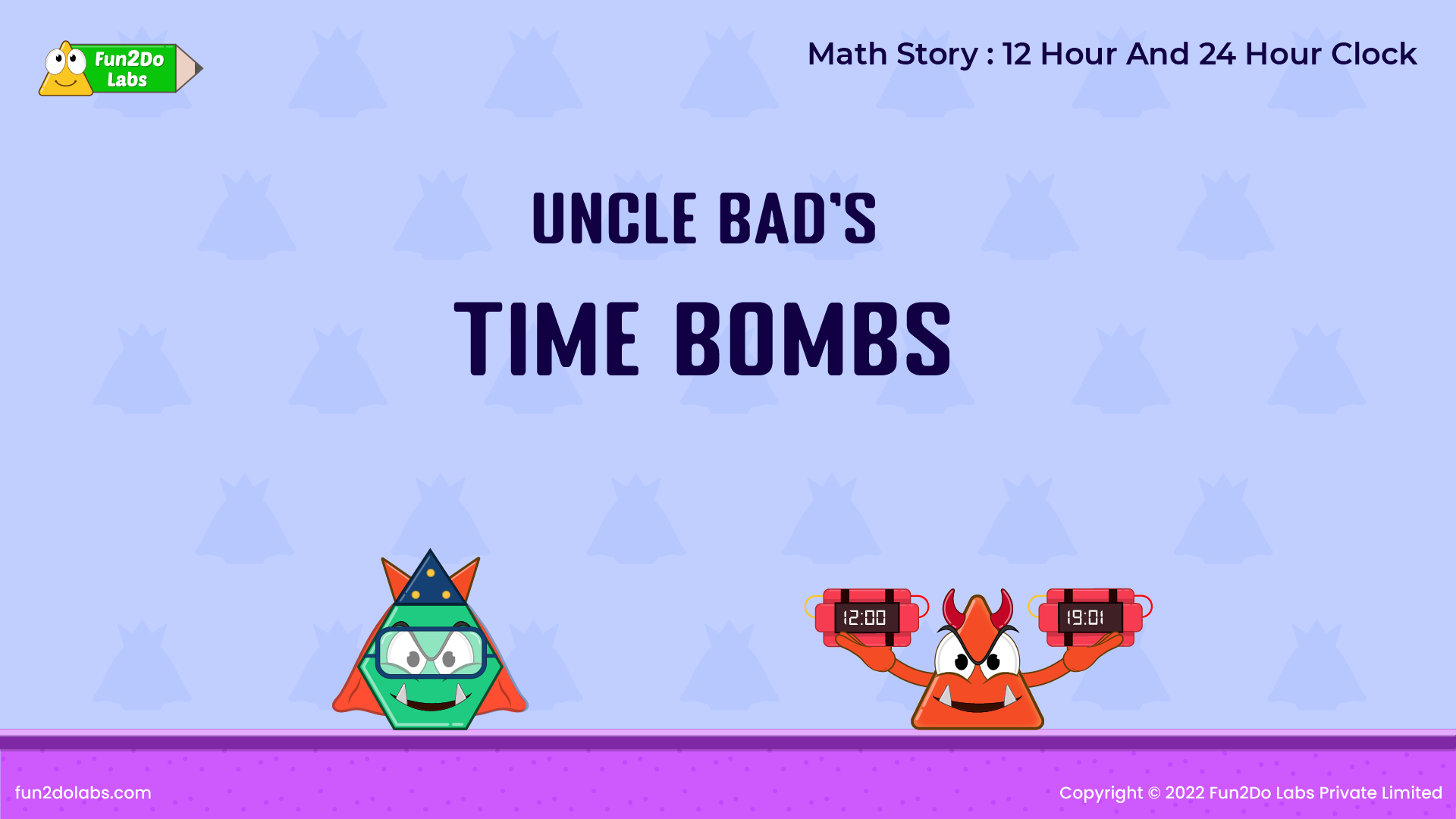 “So children, a day consists of morning, evening and night. But measuring time in just these three aspects will not give us specific results. So we measure time in terms of hours, minutes and seconds. Can you tell me how many hours a day has?” asks Uncle Math. 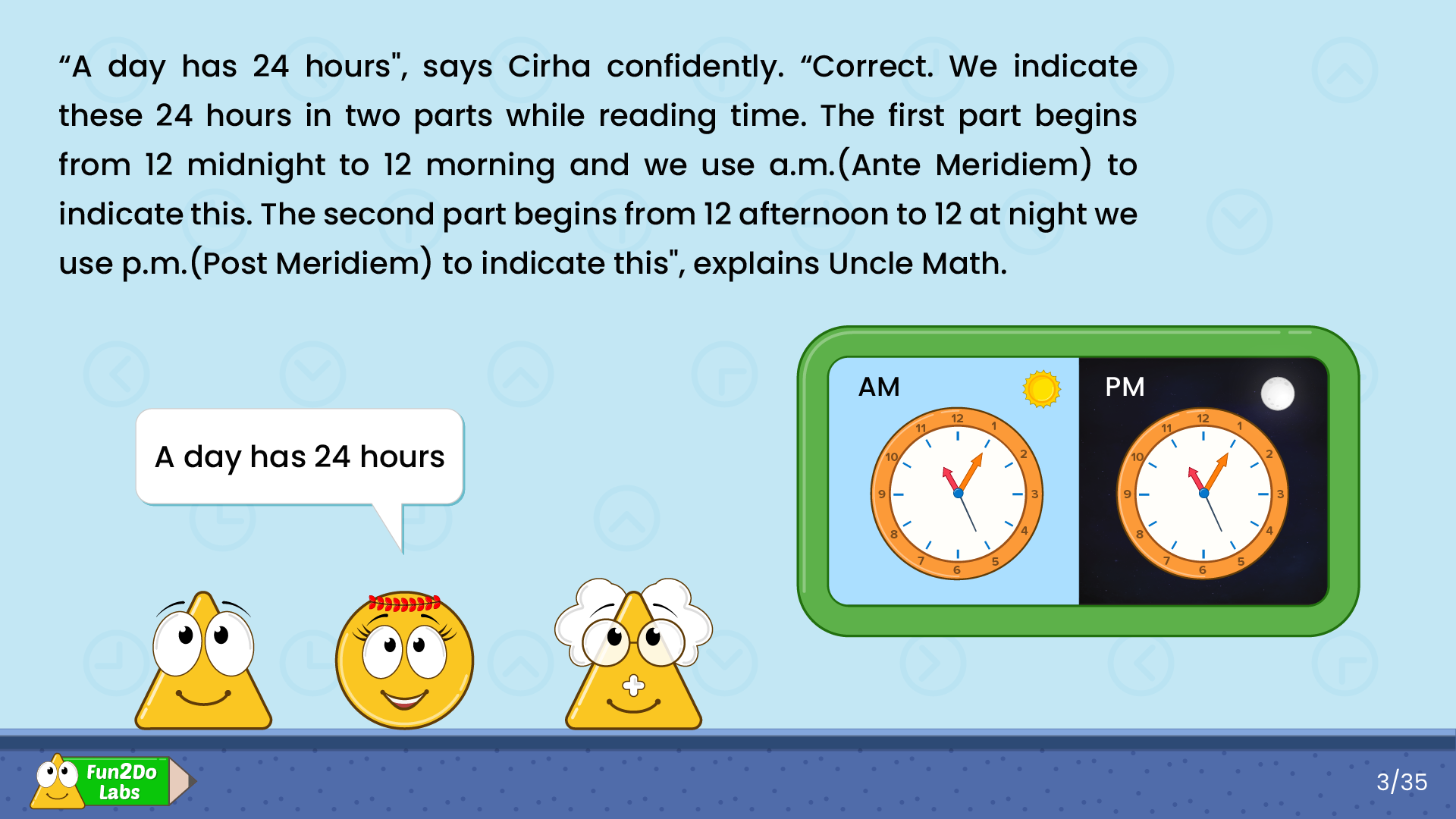 “Oh. So if it is 11 o clock in the morning, I will say 11 a.m. And if it is 11 o clock at night, I will say 11 p.m. Am I right Uncle Math?” says Triho. “Absolutely! a.m and p.m also avoid confusion while reading the same hour. Because this clock uses 12 hours format to indicate time, we call it a 12-hour clock”, adds Uncle Math. The kids practice reading time on a 12-hour clock.

Beep! Beep! What is this sound? New notification on Mr Messenger. Is there a new message?

Oh yes! Uncle Math has received a message from his teacher friend. “Uncle Bad is planning something big this time. I heard that his army is placing many clocks around Samper town. This does not look good”, reads the message. Everybody is tense.

“Why many clocks in the town? What if there is a hidden time bomb in them?” says Cirha. “Oh yes! This could be a possibility as the easiest way to destroy Samper town is through time bombs”, says tensed Uncle Math. Everybody is thinking and trying to predict the new attack strategy.

Suddenly, Triho realises something. “Oh no! The bombs will explode one after the other in this attack! That will destroy the entire town. We have to do something”,  he says. Everybody panics. What will they do now to stop the attack and save the town?

“Uncle Math, can your gadgets help here?” asks Triho. After thinking for a while, Uncle Math rushes to get something from his secret locker. What is he getting?

“This is Mr Bomb Detector. He detects the bombs and displays the time of the explosion. Only he can save us today”, says Uncle Math. Together, they decide first to search for the bombs using the gadget and then deactivate them later. It is time for some action now. 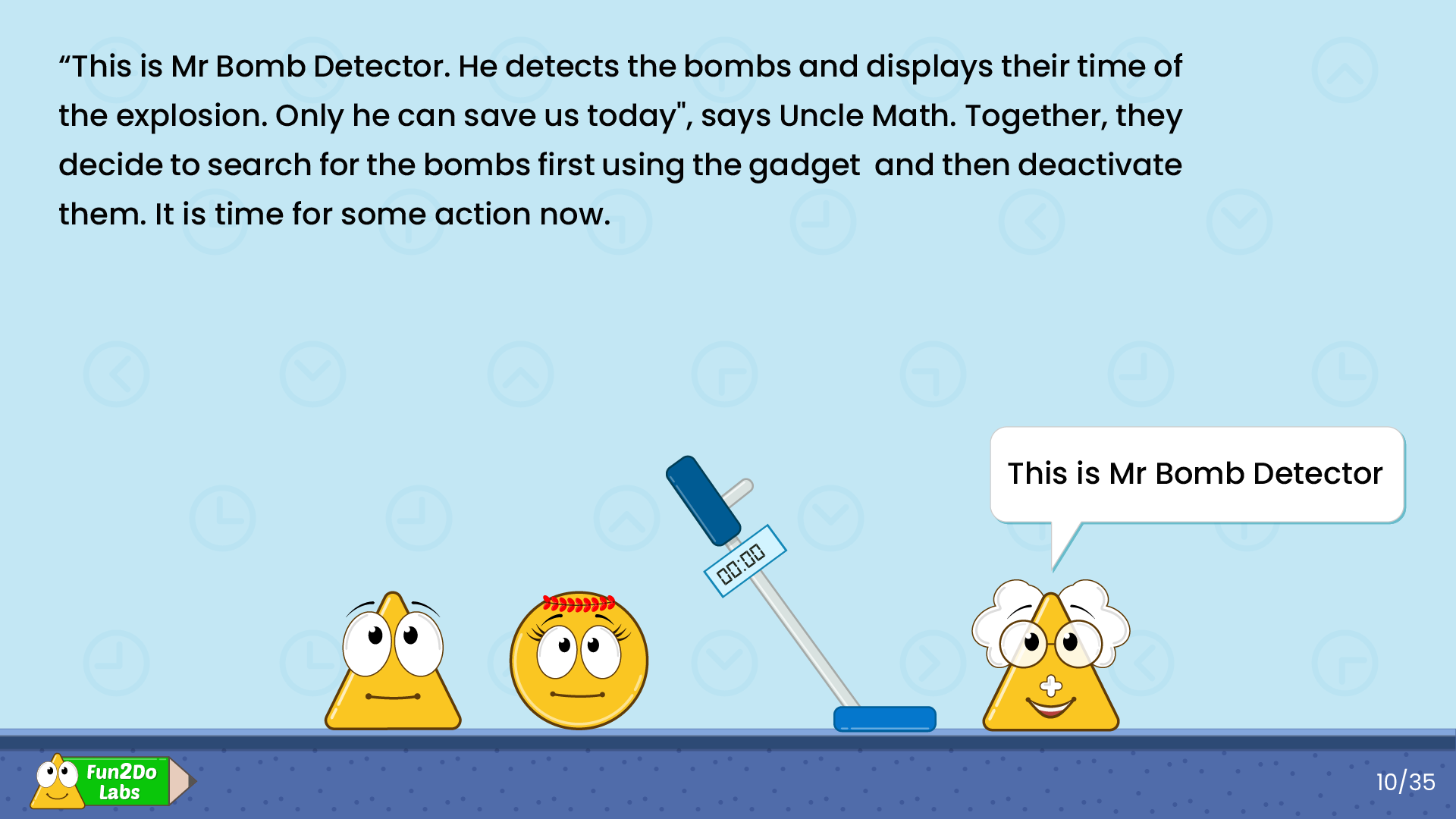 Cirha is holding Mr Bomb Detector and scanning through various areas. Beep!Beep!Beep! Suddenly, Mr Bomb Detetcor starts producing a loud sound. Cirha tensely looks at Uncle Math and says, “What does this mean?” Yes, their guess was right! This indicates the presence of a bomb here.

They quickly dig and take the time bomb out.

There are red and yellow wires attached to the bomb. He decides to cut the red wire. Click! He cuts the wire and the timer stops. Hurrah! The first bomb is deactivated.

Phew! Everybody is slightly relieved! But they are not completely safe yet. They continue searching for more bombs.

Beep!Beep!Beep! Mr Bomb Detector starts producing loud sounds again. It looks like they have found the second bomb. It was hidden behind a table this time.

But something strange happens as they take the bomb out. The timer on the bomb shows 14:00 and Mr Bomb Detector shows 2:20 p.m. “What! Two different times? And we do not use numbers greater than 12 in the clock. Something is fishy here”, says Triho. Is this a new twist in Uncle Bad’s plan? What do you think this means?

“Uncle Bad is so smart!” whispers Uncle Math. “To confuse us, he has used 24 hours clock in the time bombs”, he explains. What? Is 24 Hour clock a new type of clock? How can one use it? 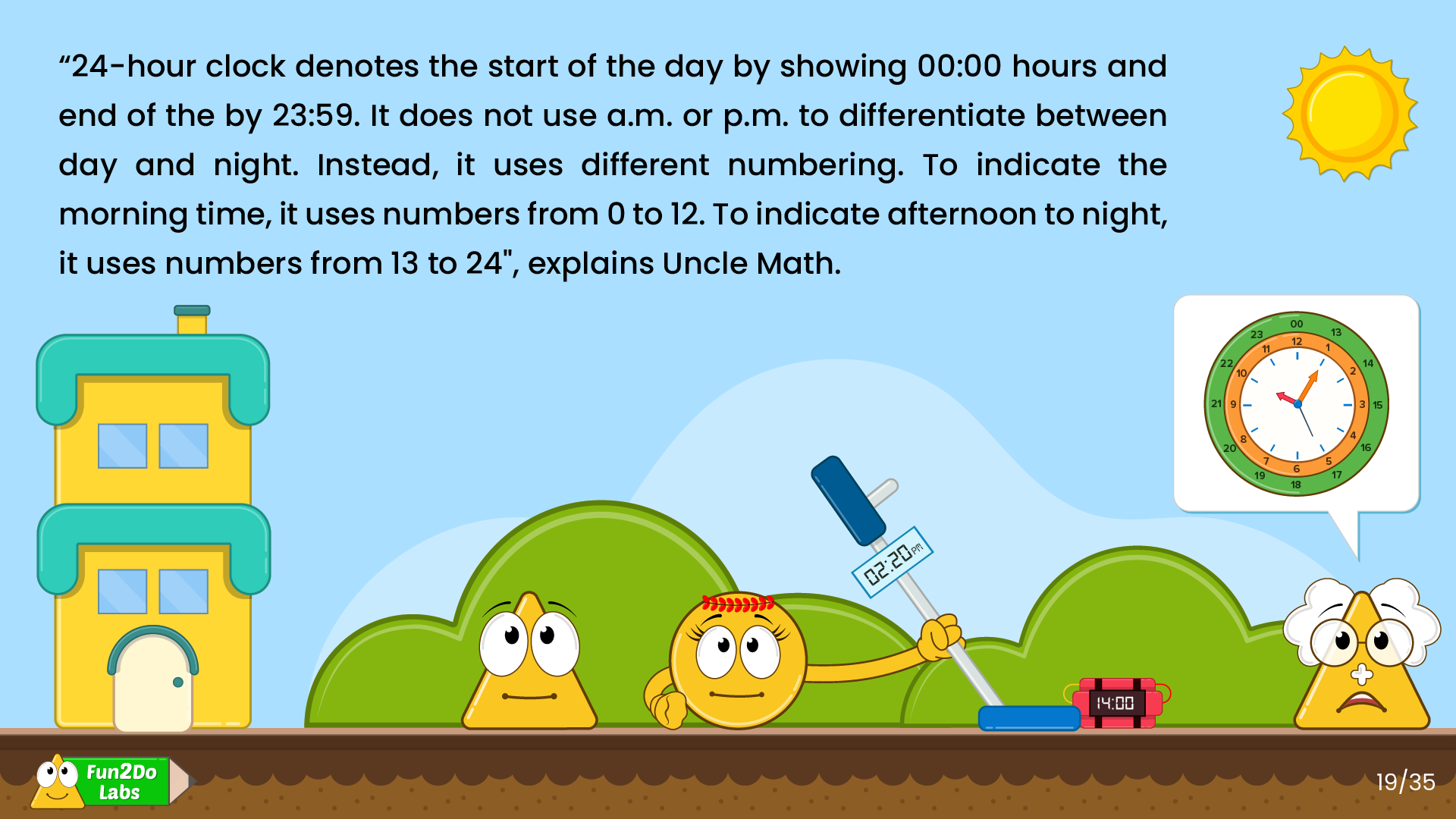 Before they run out of time, Triho quickly cuts the red wire again and the timer stops. The bomb is deactivated. Phew! Everybody is slightly relieved! They continue searching for more bombs.

Beep!Beep!Beep! Mr Bomb Detector detects again. They have found the third bomb. It was inside a bag.

The timer on the bomb shows 17:00 hours and Mr Bomb Detector shows 5:10 p.m. Can you identify if they have ample time to deactivate the bomb? If yes, how much?

“17:00 means 5:00 p.m. So we have only ten minutes to deactivate”, says Cirha to herself. Everybody panics. Triho hurries to deactivate the bomb as soon as possible.

Click! He cuts the wire and the timer stops. Hurrah! The bomb is deactivated. It looked like the time had stopped. Everybody is relieved.

Beep!Beep!Beep! Mr Bomb Detector detects again. But, not the usual way! Everybody is shocked. Why?

This time, the bomb is with Atriho Boss. “Haha! Come and take it from me otherwise, I will just throw it”, he laughs! The timer on the bomb displays 19:00 hours and Mr Bomb Detector shows 7:02 p.m. Can you identify if they have ample time to deactivate the bomb? If yes, how much? 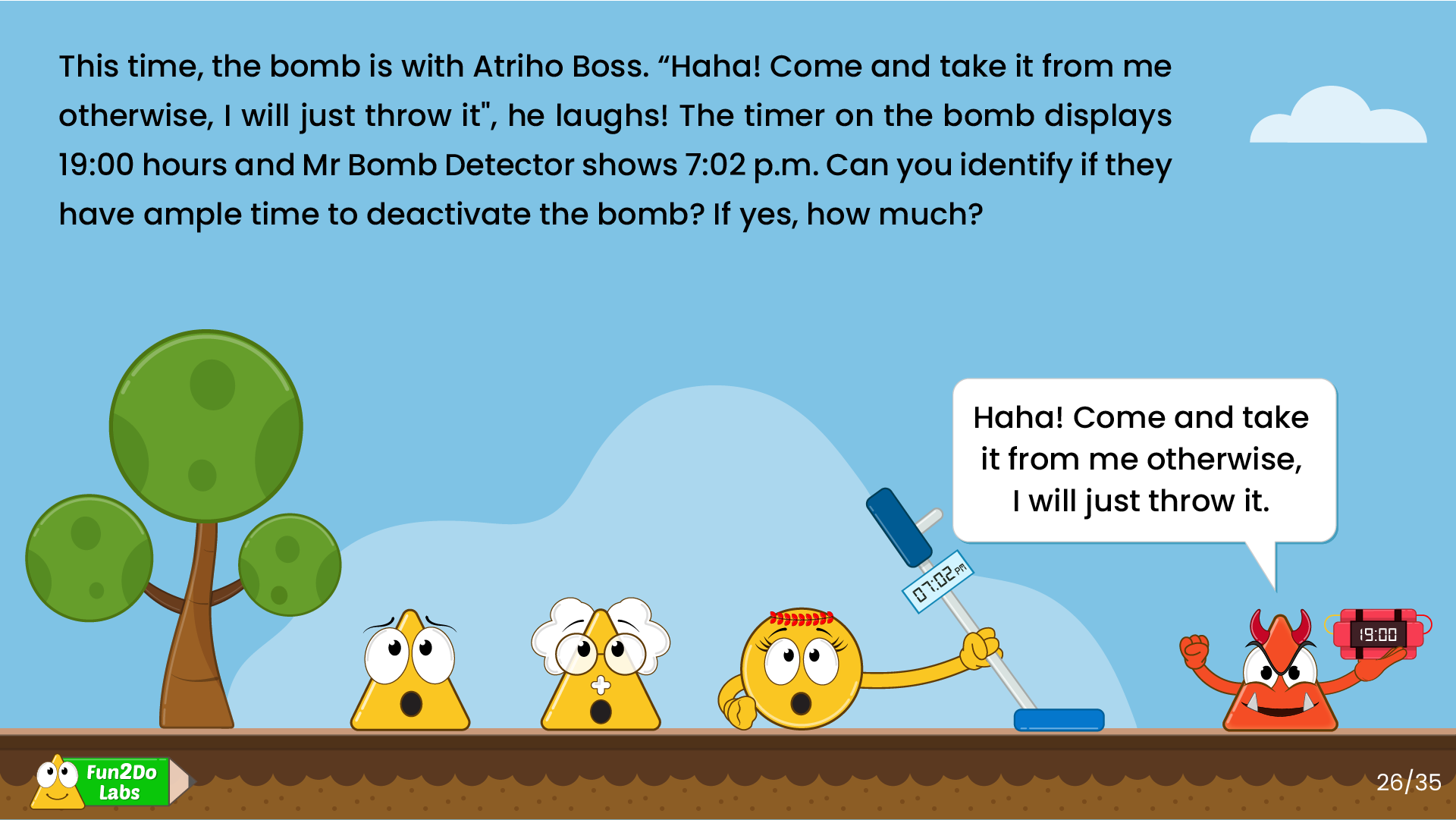 19:00 hours means 7:00 p.m. Triho has only two minutes to fight Atriho Boss and deactivate the bomb. This is not going to be easy. Will Triho be able to save himself, his loved ones and the town?

Crash! Bam! Boom! Triho fights Atriho Boss bravely. But the villain is not so easy to handle. He attacks him back strongly.

“Let me snatch the bomb first and deactivate it. Then fight him”, thinks Triho. He is left with no other choice. He takes a big leap of faith and jumps on Atriho Boss’s head. The forceful jump makes him drop the bomb. The timer on the bomb shows 19:01 hours. Will he be able to deactivate the bomb?

Like the speed of air, Triho cuts the wire. Click! And the timer stops. Hurrah! The bomb is deactivated. He saved the town once again. 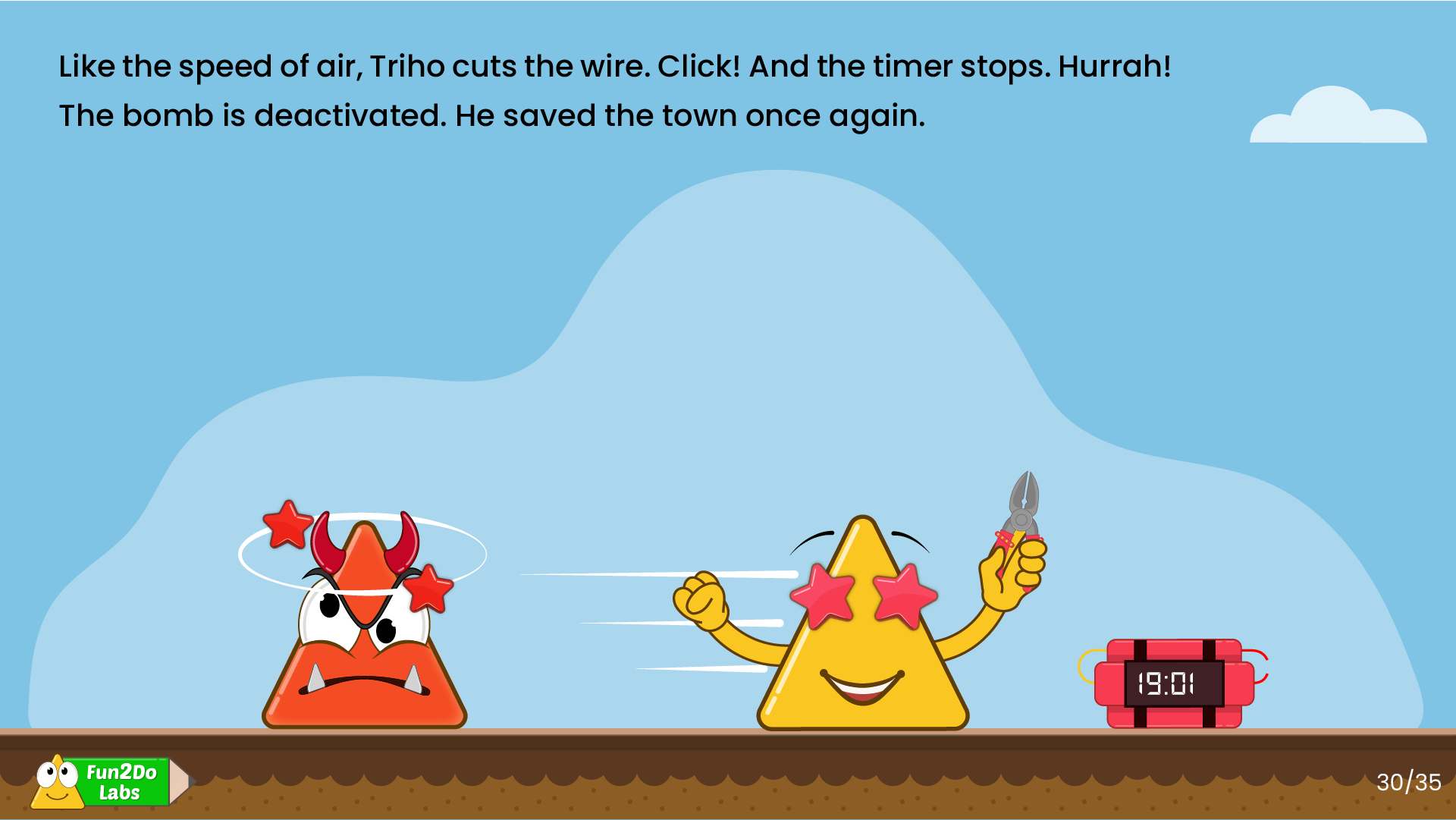 “Argghh! Triho! I will not leave you”, says Atriho as he comes to attack him. But Triho fights him back bravely making him run away from there.

Cirha comes and hugs Triho. Uncle math celebrates their victory. It was not an easy day for them. Yet they overcame it through patience and courage. 12 hour and 24 hour clocks might seem confusing, but they actually are so related. Do you agree?