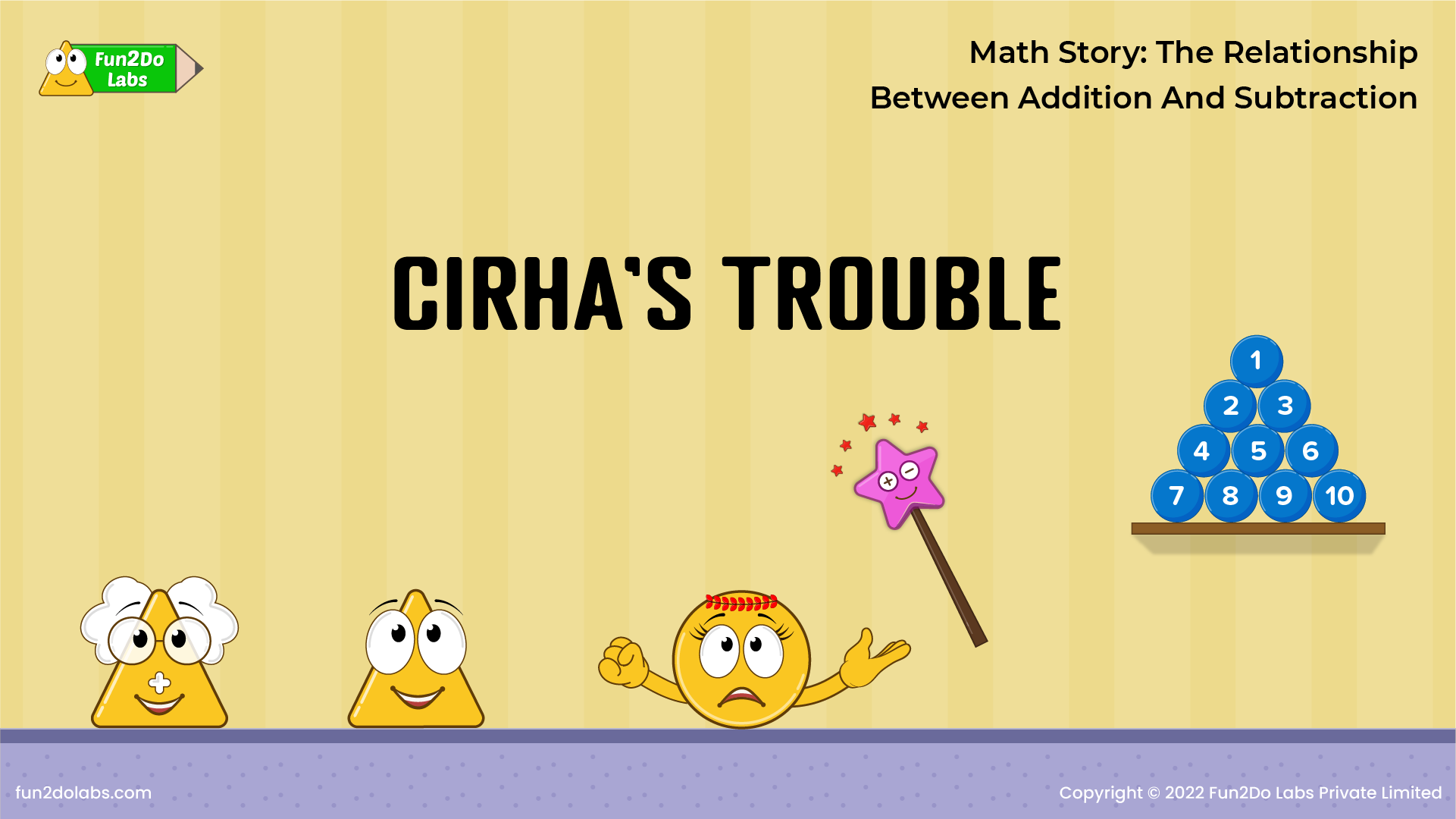 Topic: Relationship Between Addition And Subtraction

Cirha is having a great time with Uncle Math’s new gadget: Ms Add Subtract. This gadget makes things disappear if the answer is right. Cirha has been enjoying disappearing things.

She wants to try something more fun this time. “How about making Triho’s favourite balls disappear?” she thinks. Immediately, she runs towards Triho’s house.

She grabs his favourite blue balls and says, “Ms Add Subtract! Take away 6 balls from the group of 10, only 4 balls remain. Go!”

Voila! Cirha’s answer is right. The 6 balls disappear, and only 4 remain. “It worked! It worked!” she says while jumping with joy. But suddenly, she realizes something. 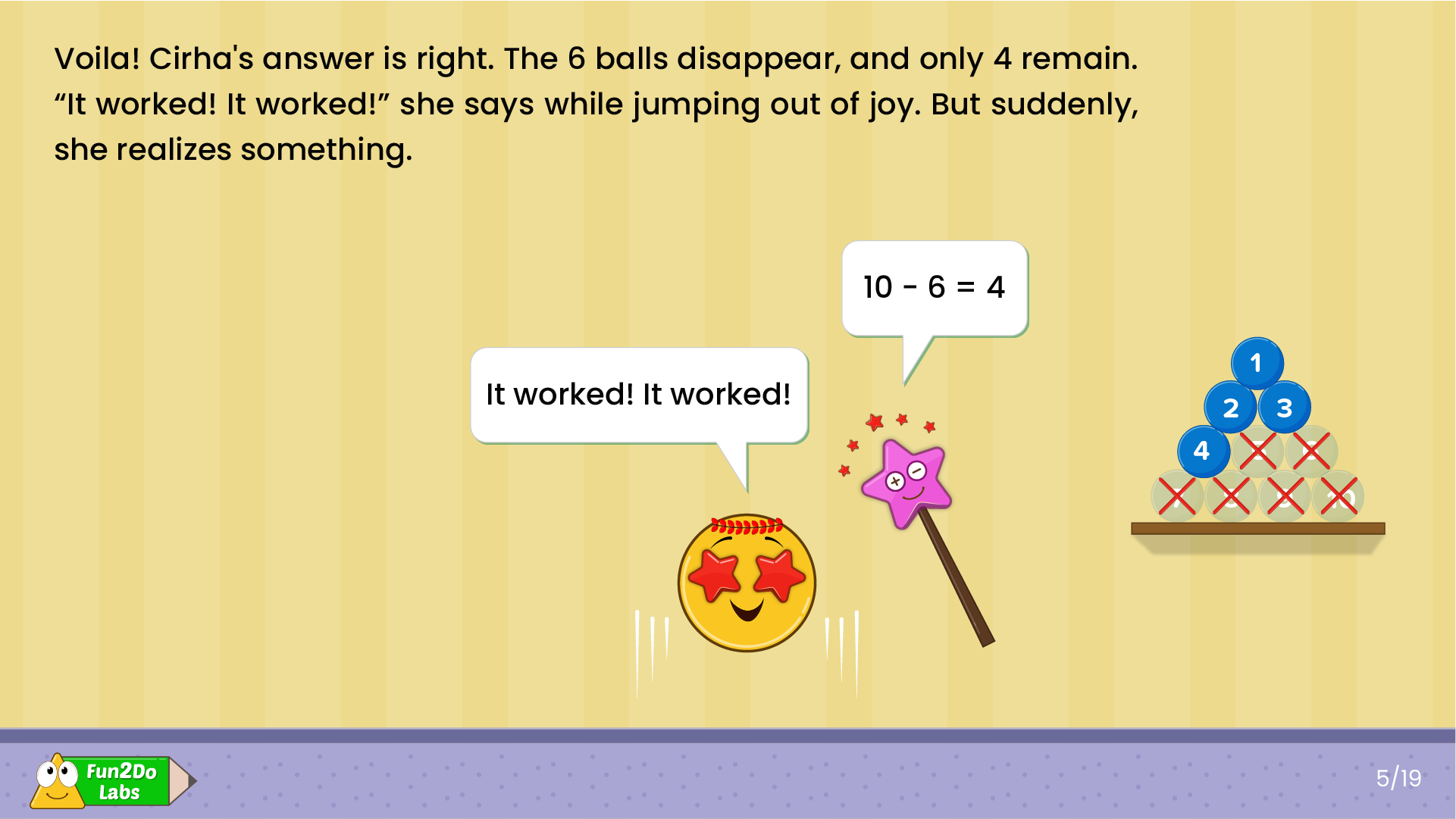 “Oh no! They were Triho’s favourite balls! He will get angry. What do I do now?” she panics.

Cirha tries Ms Add Subtract in various ways to get the blue balls back. But nothing works. “Krrrr!” the door opens. It looks like Triho is back. What will she do now? 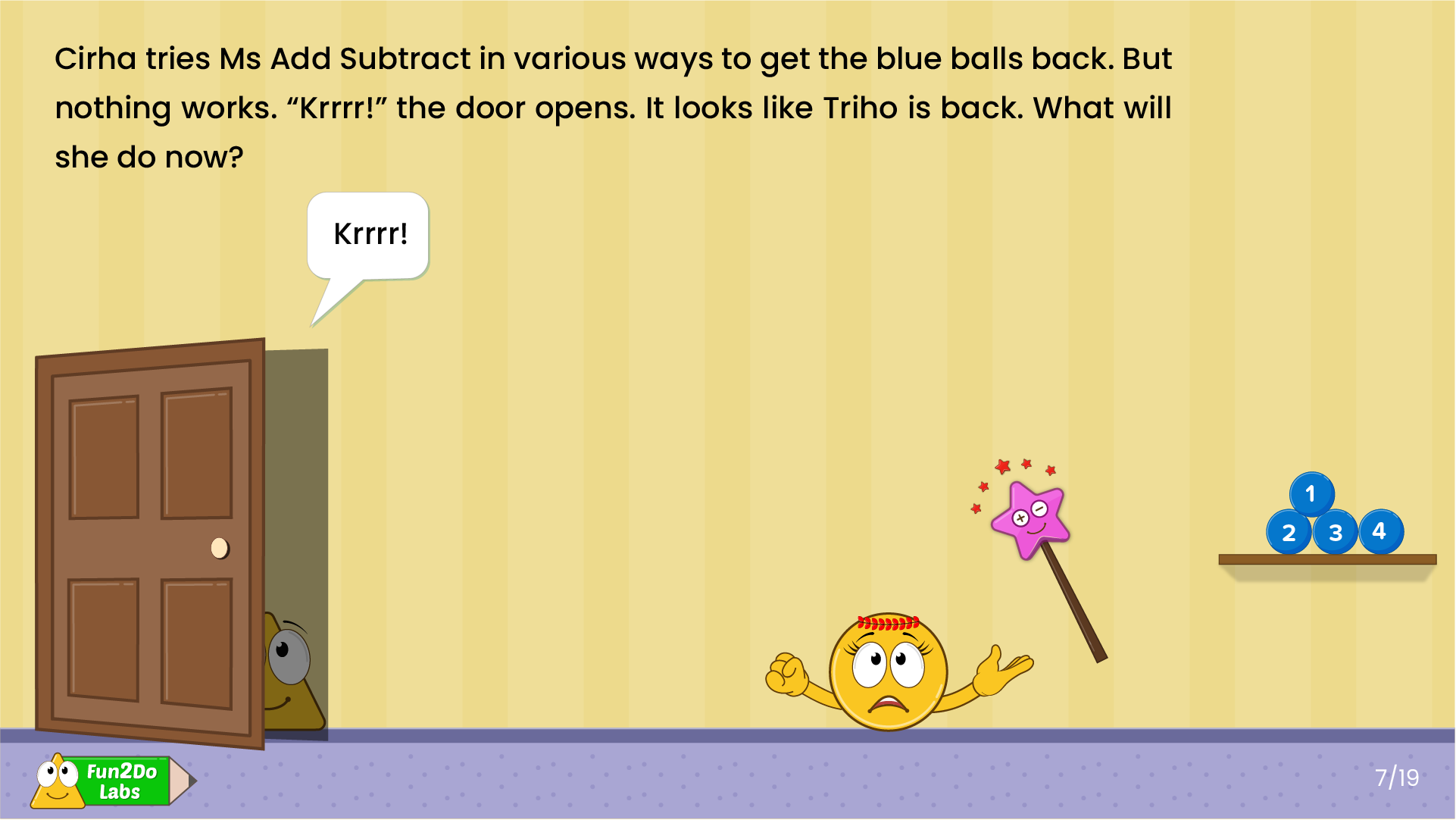 As Triho enters, he notices that Cirha is sad and worried. She narrates the entire story and apologizes to him. “Let us call Uncle Math here. Ms Add Subtract is his gadget. I am sure he must have some solution to this problem”, he says and calls him.

Cirha rolls Ms Add Subtract and says, “Ms Add Subtract! Add 6 more balls to 4 to get back all the 10 balls. Go!” Do you think all the balls will come back?

Hurrah! All the balls reappear! Cirha and Triho jump out of joy. 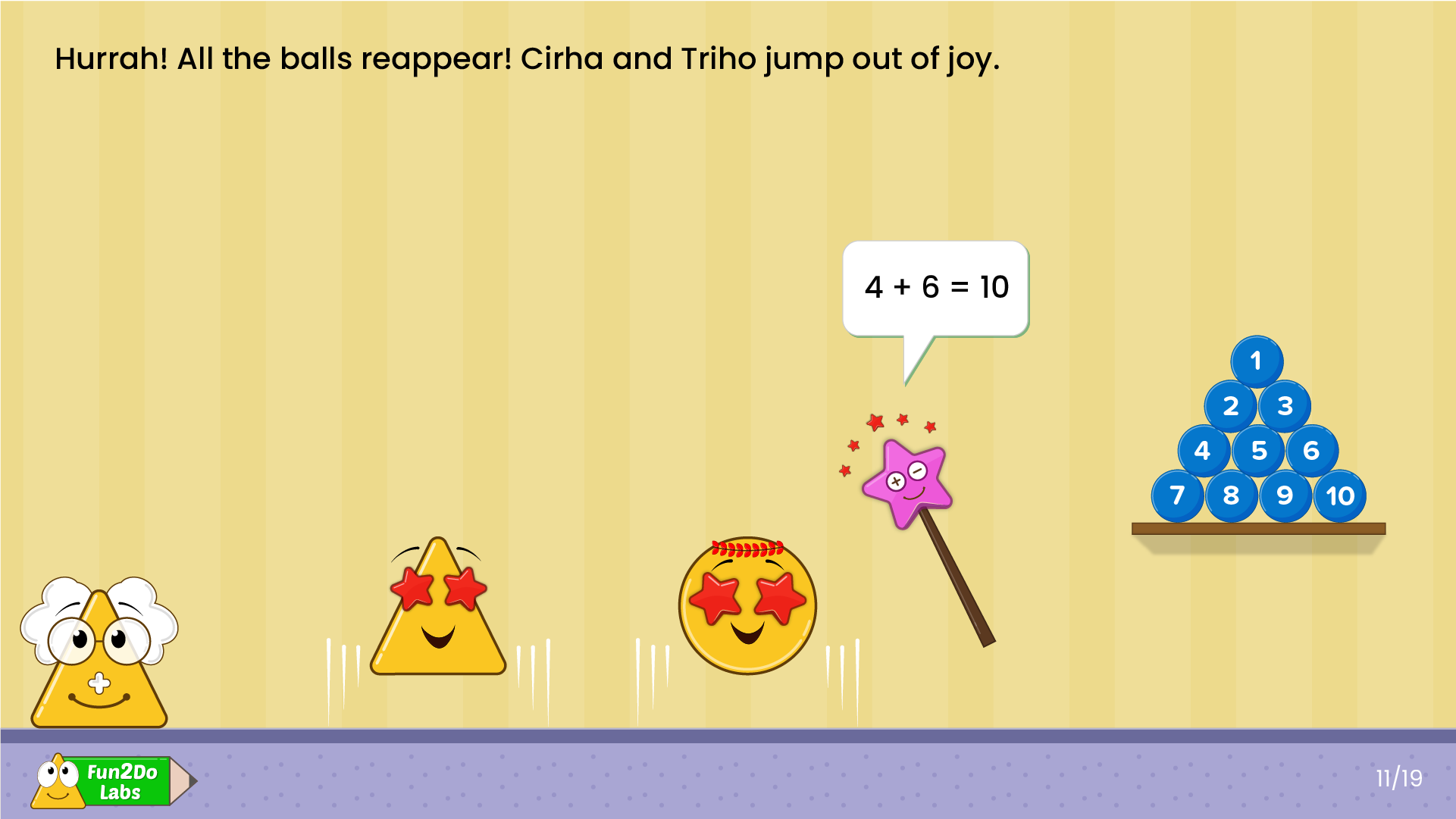 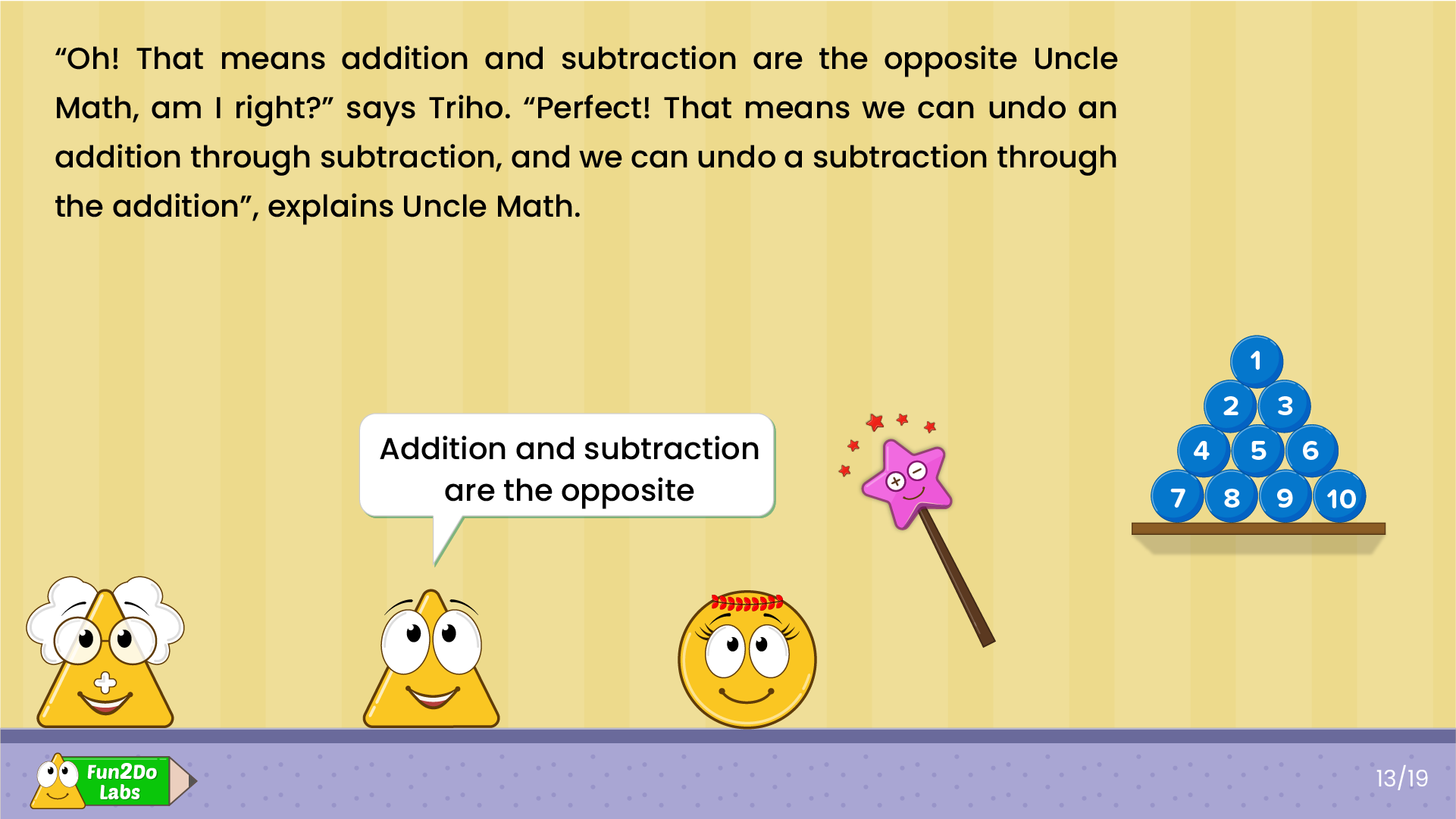 “Alright! I will leave now, children”, says Uncle Math and leaves. Cirha and Triho thank him for the help. They are elated as they got their blue balls back and also learnt the trick to make things reappear. “Hey! Let us try the gadget on some cupcakes now?” suggests Triho. Cirha Immediately agrees.

“Ms Add Subtract! Take away 3 cupcakes from the pack of 8, only 5 remain. Go!” says Cirha. The cupcakes disappear.

“Ms Add Subtract! Add 3 more cupcakes to 5 to get 8 cupcakes. Go!” says Triho. The cupcakes reappear. “Hurrah! This is so much fun,” she says.

They laugh and have some more fun with Ms Add Subtract. Cirha promises to not try anything without understanding the consequences of her actions.