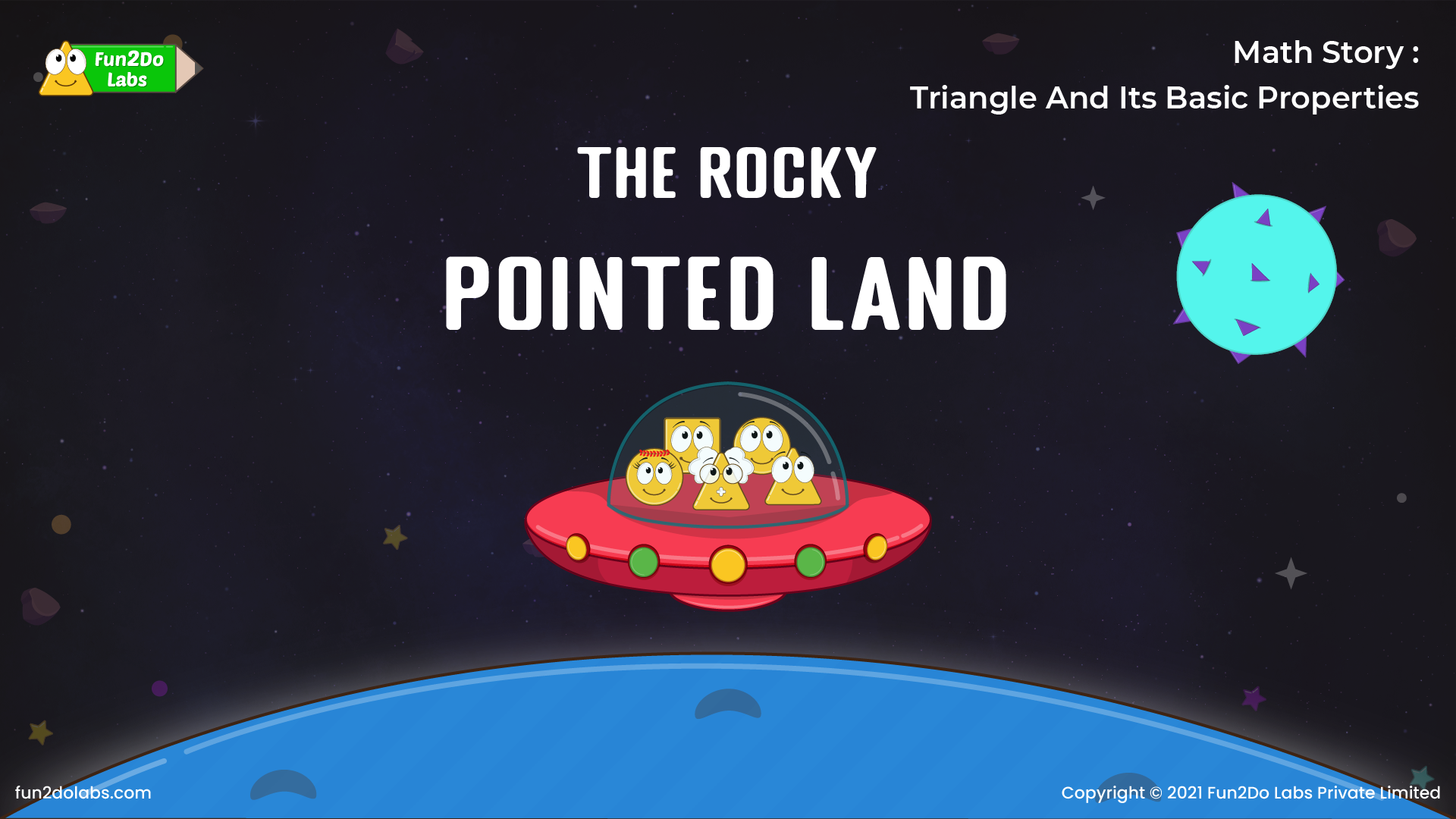 Topic: Triangle And Its Basic Properties

“Where are we going?” questions Squarho. “We are going to the Rocky Pointed Land”, answers Uncle Math. “Will everything there be sharp and pointed like a knife? Won’t they hurt us?” asks Cirho. Uncle Math giggles and replies, “Let’s find out”.

As they get close to the new planet, everybody spots the huge, pointed objects. They arrive and start exploring the land. “Children, do you see any similarities between these pointed objects and us?” questions Uncle Math. 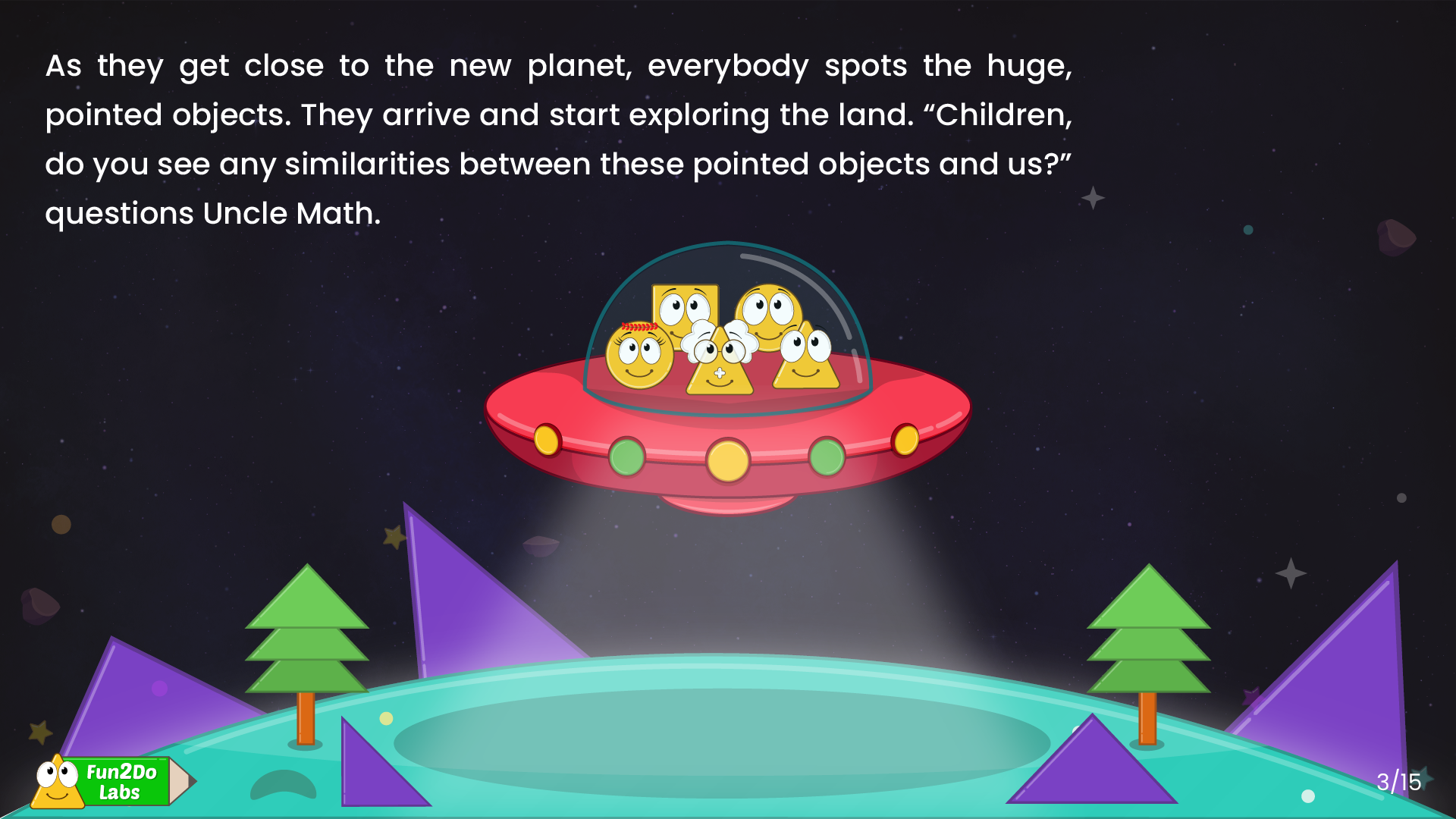 “Ahh! They cannot move like us”, answers Cirha. Uncle Math appreciates her effort, but she is not correct. He asks Triho to answer. “Umm! All these pointed objects have three sides and three corners like me and Uncle Math”, responds Triho hesitantly.

“Perfect Triho. You got it right. This shape with three sides and three corners is called a Triangle”, replies Uncle Math. “Amazing! Triho and Uncle Math are triangles”, says Cirho. 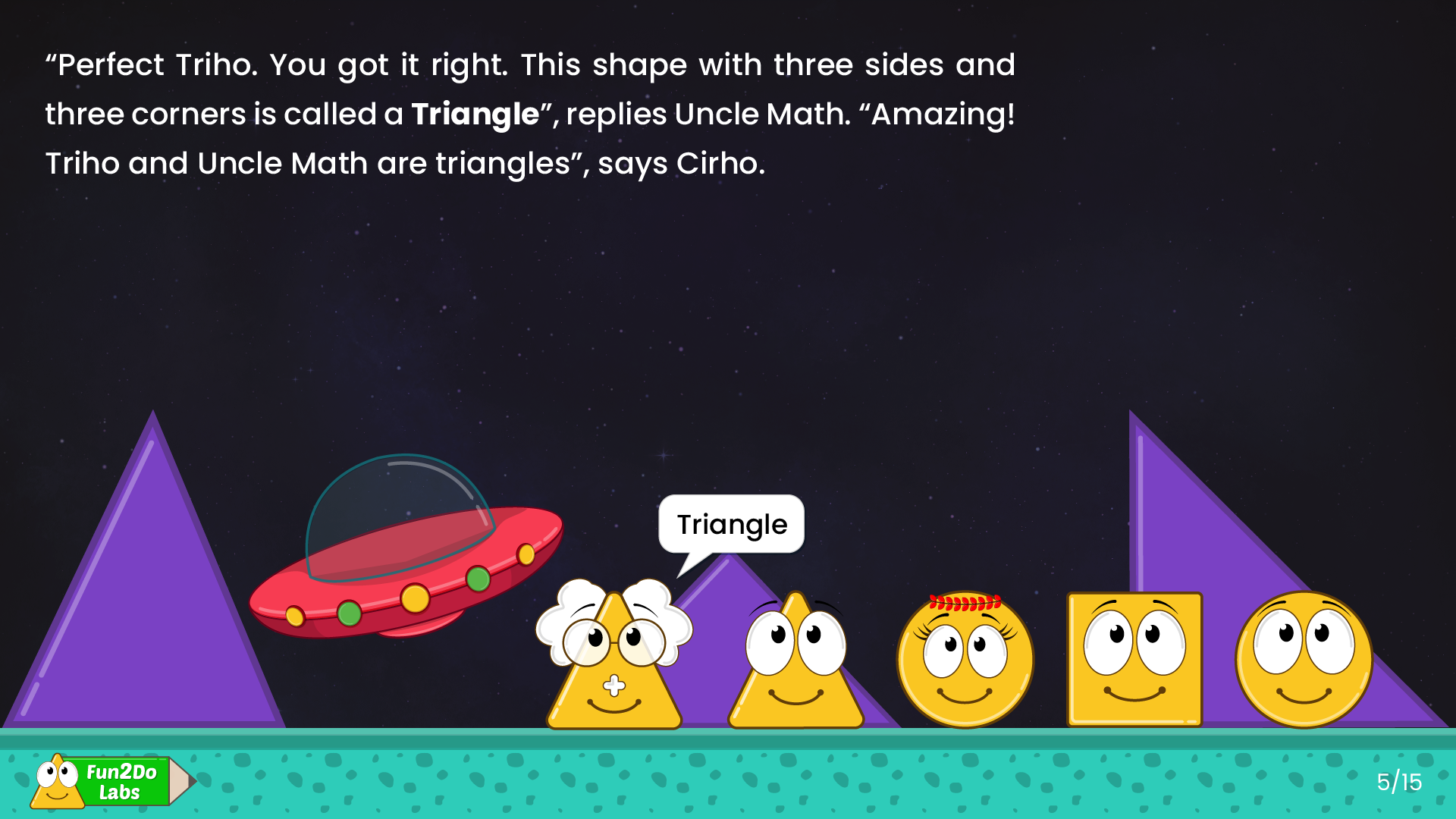 “If you observe carefully, not all the triangles here look the same. Some have long sides while some have short sides”, explains Uncle Math. “And you know what is special about…” Thudd! Suddenly, they hear a loud sound and spot that their spacecraft has fallen into a pit. 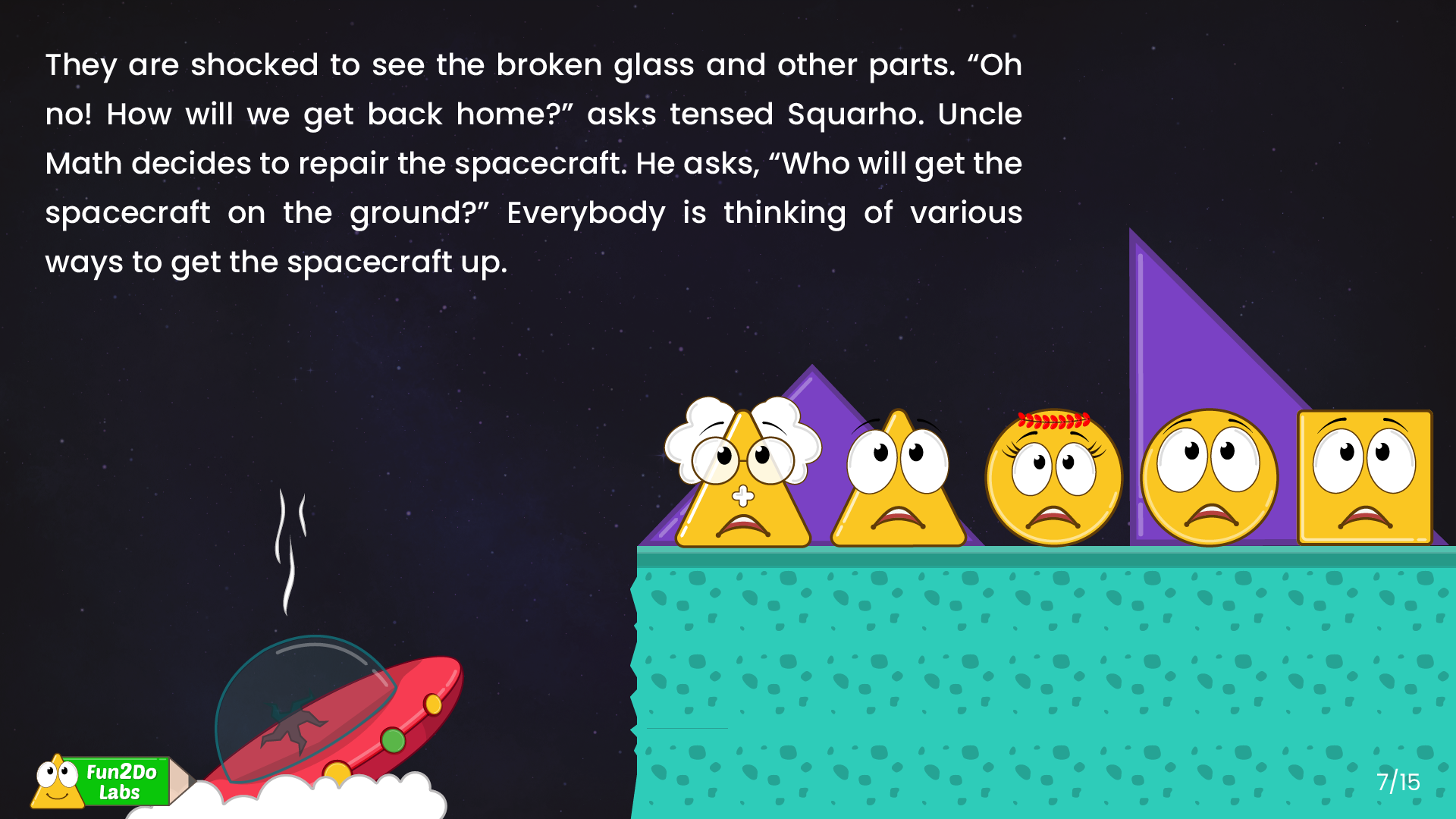 It looks like Squarho has a plan. “Triho and I can enter the pit and build a square or rectangular wall. Push the spacecraft up and get it on the ground”, he says. Cirha likes the idea but has a concern. “But pushing the spacecraft straight up would be extremely difficult and dangerous. We need to think of another way”, she says.

“How about building a triangular wall? The longer slant side of the triangle will make it easy for us to push and get the spacecraft on the ground”, says Triho. 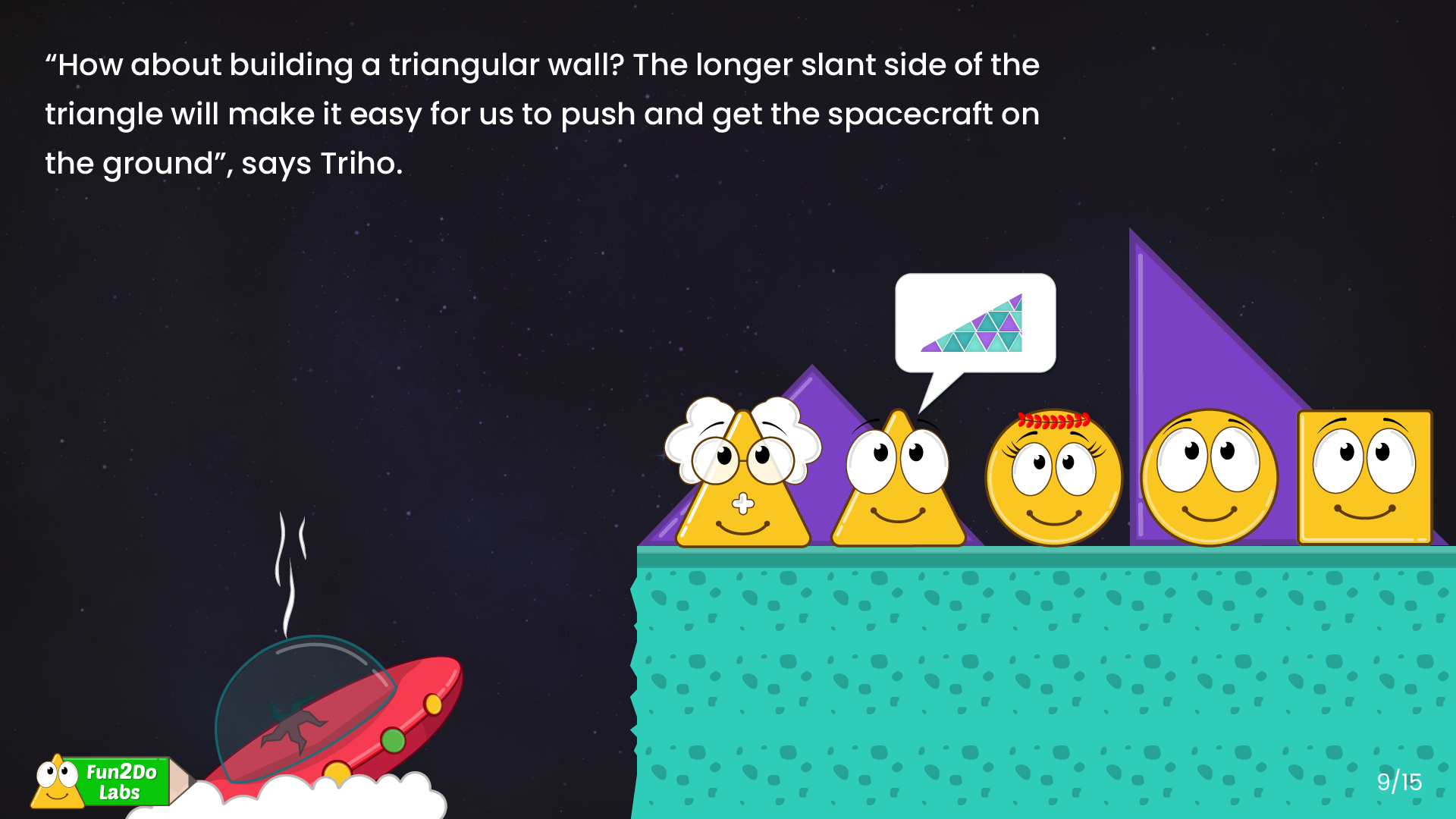 Uncle Math is impressed and asks the kids to build a triangular wall. In no time, they start constructing the wall. The wall is ready, and they are all set to push the spacecraft up.

The slanted side of the triangular wall helps them to push the spacecraft smoothly. “Yayy! Well done Triho and Squarho”, applauds Cirho. 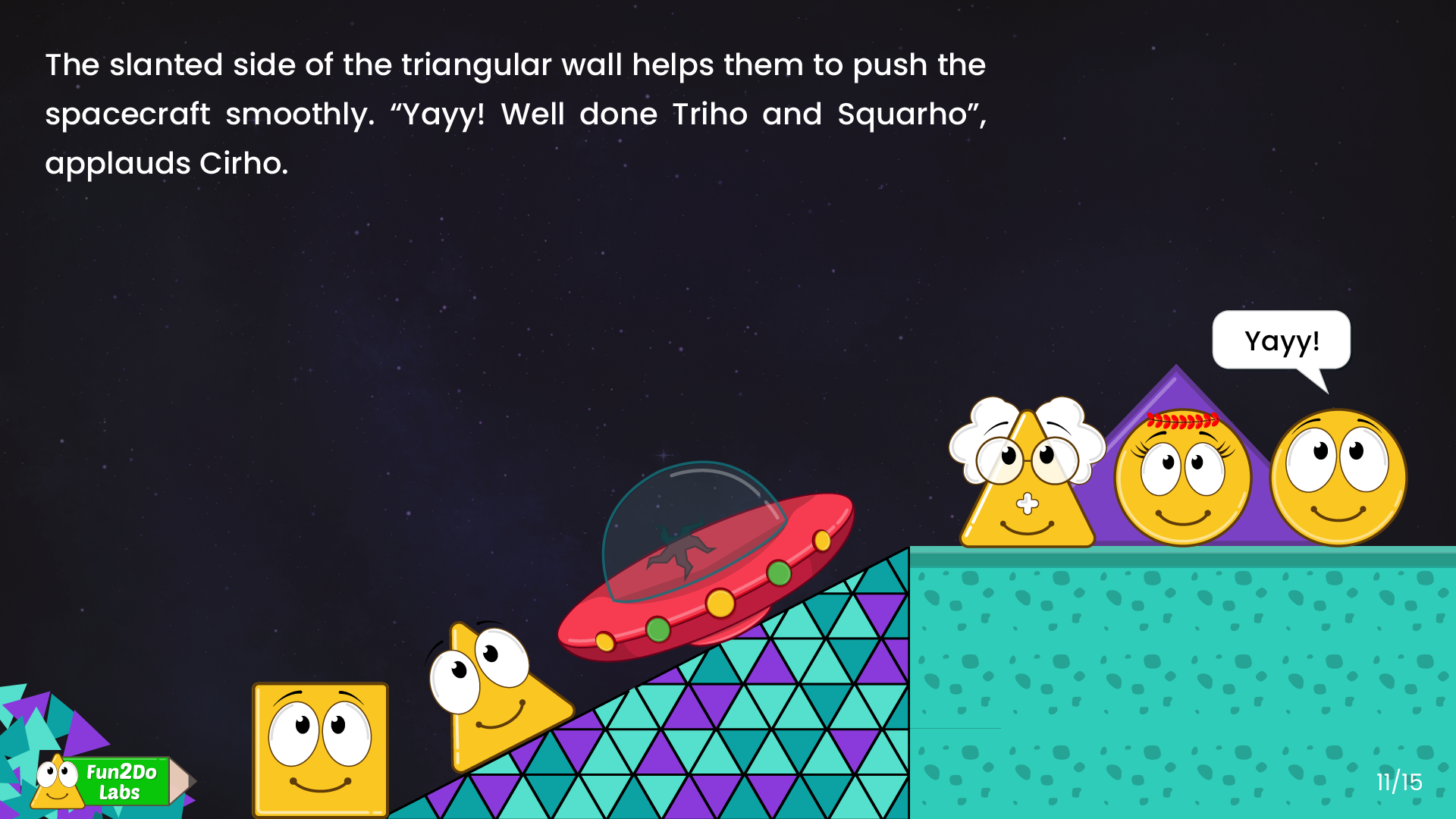 Uncle Math examines the broken parts and starts repairing them. Soon the spacecraft is ready to take another flight. Everybody boards it to fly back home.

Flying back, Cirha says, “Because of the triangle shape, we could get back home! Triangle is so important. I wish I could be a triangle too”. Triho smiles and replies, “Cirha, you can’t be us because you are special in your own way!”