“Haha! I will take all the money and hide it in such a  place that nobody will be ever able to find it. Later, I will use this money to design new advanced weapons. No one can stop us from winning now. Haha! I am Atriho Boss. The smartest villain you will ever come across!” says the Boss villain. Will he succeed in his plan?

Atriho Boss has decided to hide the money in the past so that Uncle Math and the kids cannot find it. He boards his time machine and enters some weird letters. Where is he going?

Meanwhile, Mr Messenger was able to track Atriho Boss’s activities. “Atriho Boss has looted the money from Planet Bank and is going to hide it somewhere in the past. He entered some random letters into the time machine”,  it announces. Uncle Math is shocked.

Uncle Math quickly looks at the letters and says, “Roman Numbers! That means he vanished from Roman Empire. I need to do something and stop him immediately. But how?” he thinks. What will Uncle Math do now?

“Idea!” he says and immediately decides to call someone. Who do you think he is calling? “Hello! Madam Social”, he says and iterates the entire message to her. “Don’t worry. I coming right away. I know how we can stop Atriho Boss”, says Madam Social. Triho and Cirha overhear their conversation.

“We want to help you too”, says both of them. “But it’s not safe kids”, says Uncle Math. But both deny listening to him and force him to take them. “Alright! Madam Social will be here any time. We will use her time machine and travel to the past. This is only the way to stop Atriho Boss”, explains Uncle Math.

Soon Madam Social arrives. Everybody boards her special time machine. Splash! They vanish into the past.

There are huge buildings. “Where are we, Madam Social?” questions curious Cirha. “This is 100 AD and we are in Roman Empire”, explains Madam Social.

Suddenly Uncle Math spots similar letters which he had seen earlier. He immediately runs to grab it. “I think the treasure is here”, he says. Everybody decides to find this door as soon as possible.

Soon, the huge door is found. It has some weird letters written on it. “What are these letters? I am sure they indicate something”, says Triho.

“These letters are actually indicating numbers. These are called Roman Numerals. It is a number system that was invented by the ancient Romans for the purpose of counting and performing other day-to-day activities. Let me explain to you how to read those numbers”, says Uncle Math. 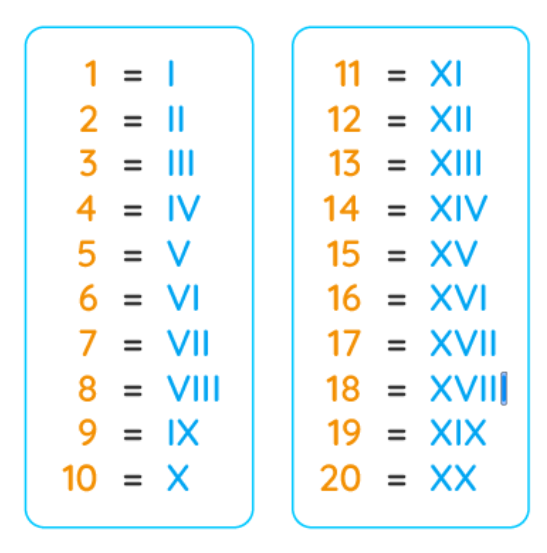 “Oh, since 1+1 gives 2, that’s why 2 is indicated using 2 I’s. Similarly, 5+3 gives 8. So VIII means 8. Basically, every number is broken down into its sum or difference and represented using those letters. So interesting”, says Triho. Uncle Math and Madam Social are proud of him.

Cirha immediately enters XVIII and the door unlocks. Everybody is delighted yet suspicious.

As they enter, they find a room filled with treasure chests. “How do we know, which is the right treasure chest?” says worried Madam Social. It looks like Atriho Boss has set up a trap for them. Triho notices something on the boxes. “Look, not all the boxes have the right match of numbers and roman numbers. What does this mean?” he says.

“The box shows 2 but does not have the right representation of it in roman numbers. This is not the box”, says Cirha. They continue this process to find the right box.

“Look here. The box shows 20 and the roman number also shows XX. This is the right box”, says Triho. Hurray! It looks like they have found the treasure.

Triho opens the chest suspiciously. As the chest opens, a loud alarm starts beeping. “Oh no! This alarm is set by Atriho Boss. Let us quickly take the treasure and run”, says Madam Social.

But it’s of no use. In no time, Atriho Boss arrives with his gang. “So you could find the treasure and the right chest. I am impressed. But you won’t be able to take anything back”, he says and his gang members attack everyone.

Triho, Cirha, Uncle Math and Madam Social fight the gang bravely. “Argghh! My gang is filled with losers”, says Atriho Boss. He decides to take things into his hand now.

Atriho Boss runs and tries to attack Uncle Math. Triho stops him in between and fights him back bravely. Bam! Boom! Crash! Atriho Boss gets nicely beaten and decides to save himself. “I will not leave you. I will come back again”, he says and runs.

Hurrah! The treasure is safe. Everyone is safe. Everybody boards Madam Social’s time machine. It is time to head back home. Time travel to the past, good teamwork and an amazing win. What an adventurous day it was.