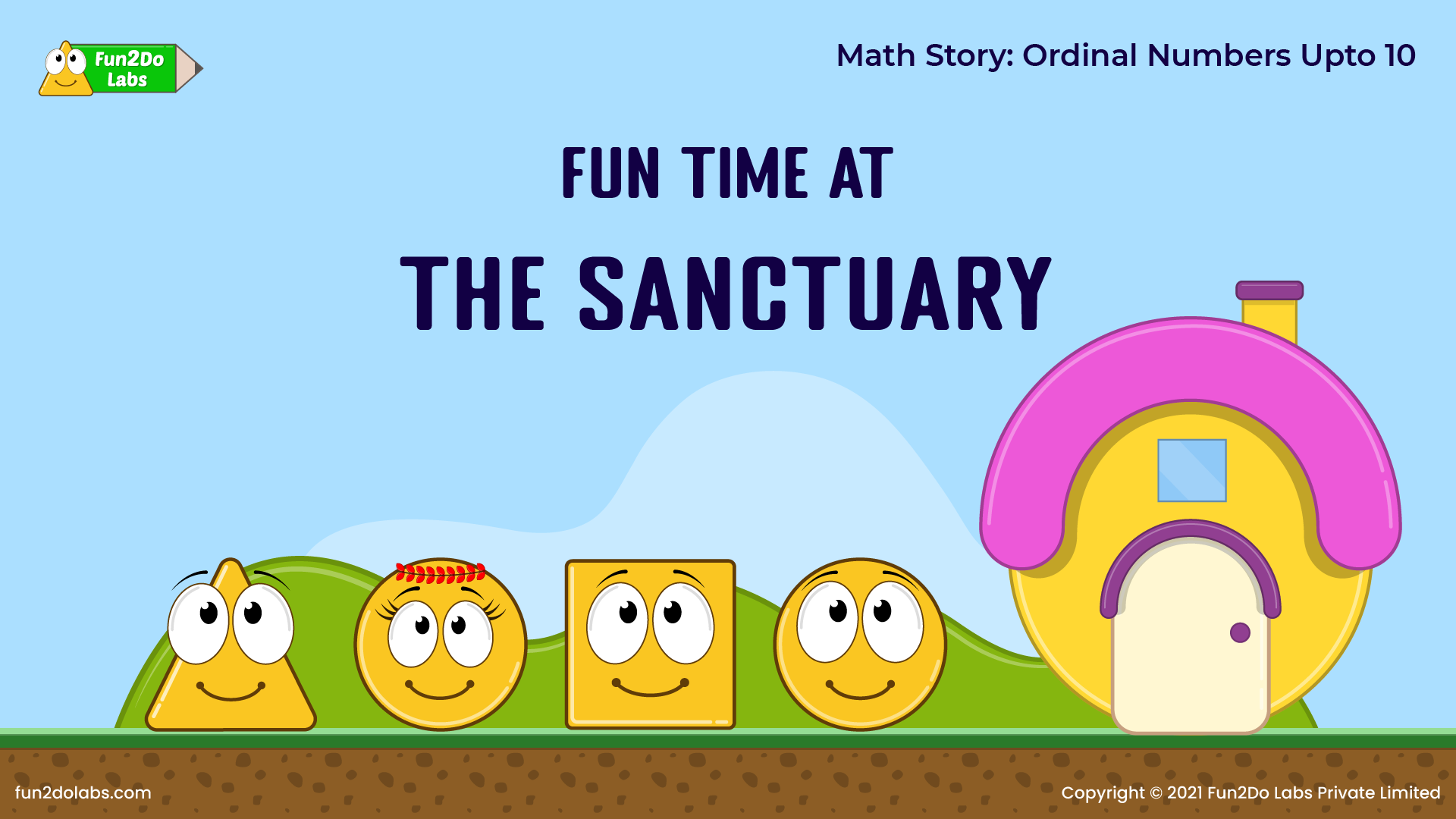 Fun Time At The Sanctuary

Topic: Ordinal Numbers Up To 10

Kids are standing near Cirho’s house. It looks like they are waiting for someone. But who?

“Hello, children!” they hear a voice as Uncle Math arrives. It is time for a trip to a wildlife sanctuary.

Everybody is excited and ready to leave.

“Today, we will see ten wild animals, and birds, and learn about their uniqueness. It will be super fun. Let’s go!” says Uncle Math.

“The first animal we will be seeing is the giraffe”, says Uncle Math while reading the safari map. “First? What does first mean? Is it a new kind of number?” questions Cirho.

Uncle Math smiles and says, “First is specifying the order in which we will see the animals at the sanctuary. Out of the ten animals, first, we will be seeing giraffes. The numbers that tell us the position or order of something are called Ordinal Numbers. You will learn more about such numbers today”. And they proceed towards the jungle. 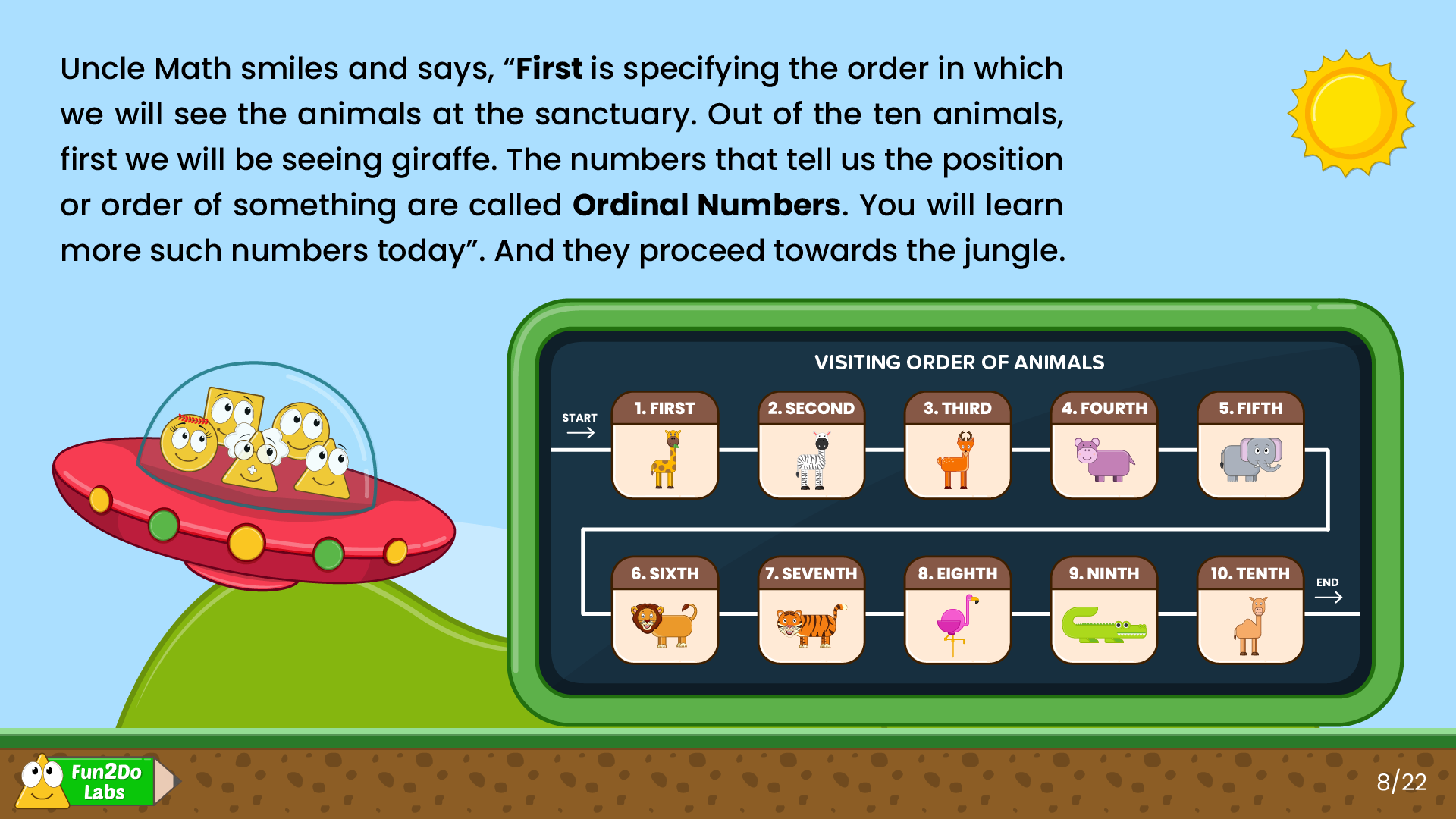 Suddenly, Cirha spots a giraffe with beautiful brown spots eating fresh leaves from the tree. Everybody is amazed to see its long neck and long legs.

“The second animal we will see is zebra”, announces Uncle Math. They spot a herd of zebra. “Look, there is also a baby zebra”, shouts Squarho. Their black and white stripes look brilliant to everyone.

Everybody is enjoying the safari. In no time, the next stop arrives. The third animal is the deer. Cirho spots a deer family where the two baby deer are running and playing with each other. They also notice a small pond nearby. 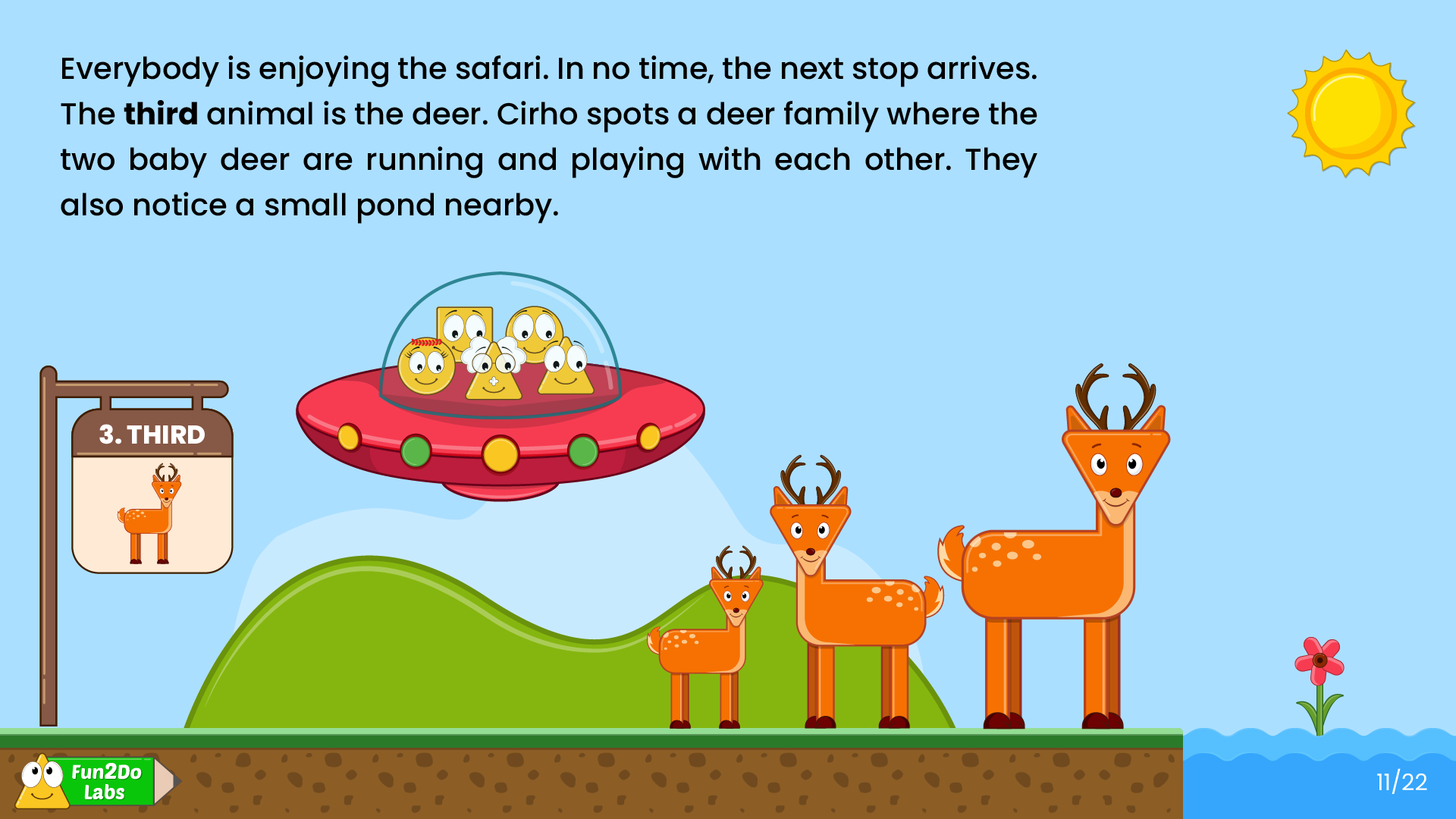 “Is the next animal an Elephant?” asks Triho as he spots some of them near the bushes. “Yes! The fifth animal is an elephant”, agrees Uncle Math. ”Children, do you know, elephants are the largest land animal on Earth”, he adds. The kids are startled.

“Will we also see lions today?” asks Triho curiously. “Yes, dear! The sixth animal is a lion”, says Uncle Math. Soon they spot a huge lion near the bushes. Its big, sharp teeth and nails are scary. Suddenly Squarho spots something on a tree. “It is a lion! I saw the lion. But the lion on a tree?” he screams. The kids are surprised to see that a lion can also climb the tree. 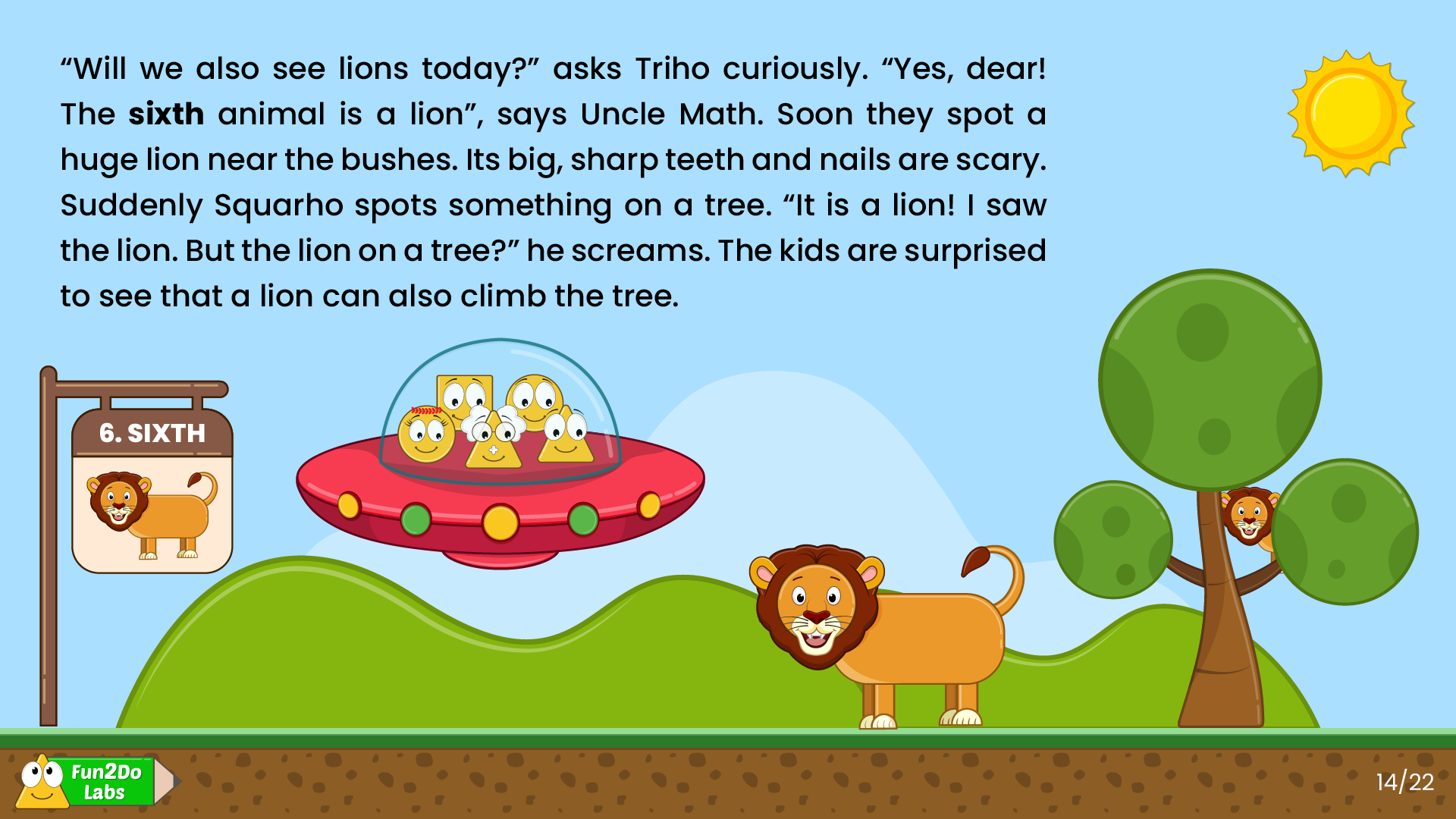 The seventh animal is the tiger. The kids could spot some tigers on the tree and some on the ground. “Wow! Tigers also have stripes like zebras”, says Cirho. 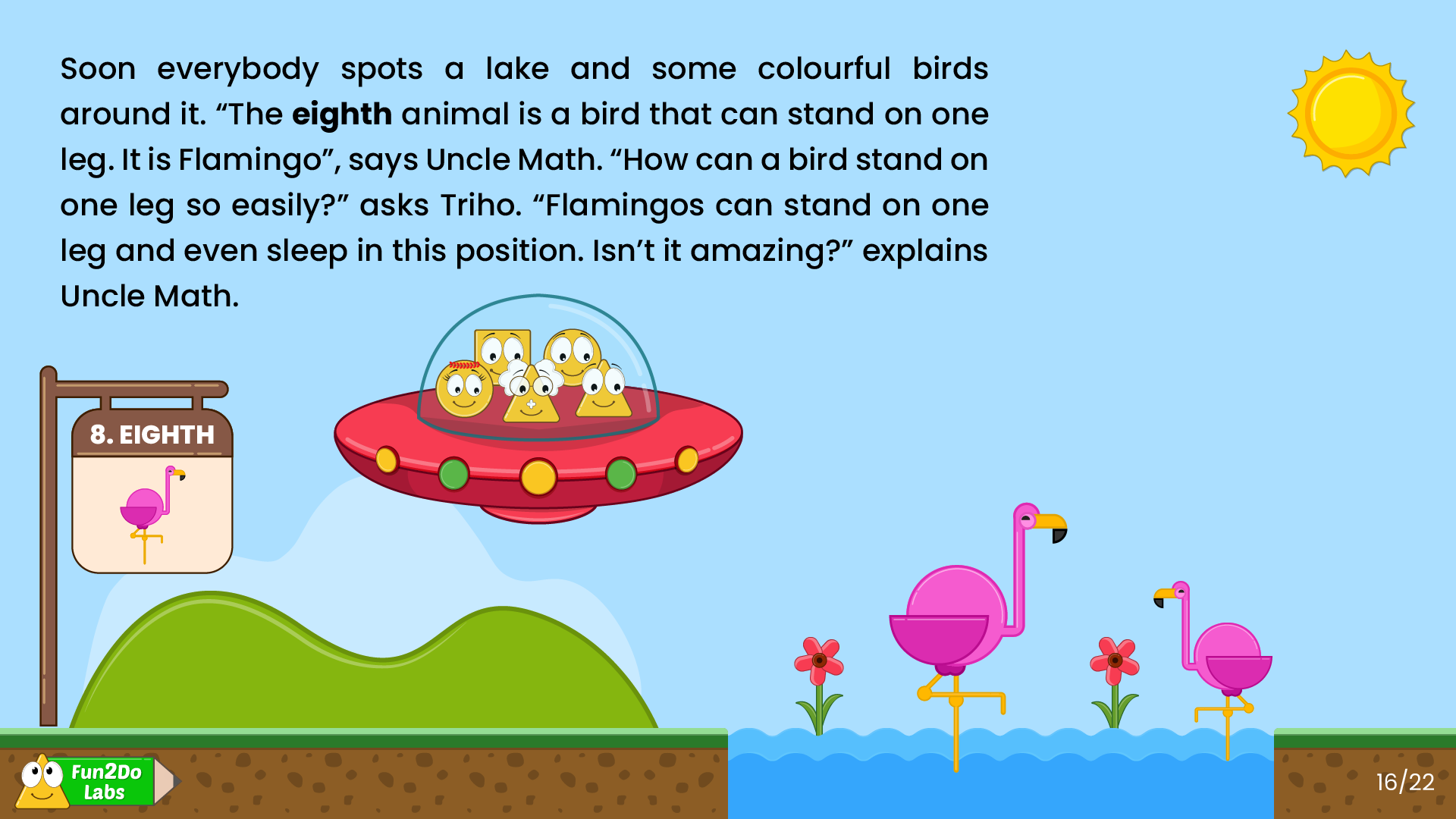 The ninth animal is a crocodile. “Crocodiles live in water and on land. They are also extremely fast, which helps them catch their prey”, explains Uncle Math.

Finally, the tenth animal is a camel. “But don’t camels live in the desert?” questions Cirha. “Absolutely right! Camels have the power of living without food and water for a long time. So they are suited in dry places. But they can also live in the jungle”, adds Uncle Math.

“Wonderful! We thoroughly enjoyed the safari, Uncle Math. Thank you for this!” say the kids together. Uncle Math smiles and says, “But I have a question for all of you. We saw so many animals today, what if they were locked in some cage just like in a zoo? Would it be correct?”

“I would not like it if somebody locked me up in a room. Then how can animals like it? The animals should be allowed to roam freely in the jungle, just like we saw at the wildlife sanctuary”, answers Triho. Others agree with him. “Amazing! I could not agree more. Alright! It’s getting dark. Let’s head home”, says Uncle Math, and they leave.