Triho And The Hurdle Race

Topic: Forward And Backwards Counting Up To 10

“The hurdle race is a type of running race where some hurdles are placed at a distance on the track. The player should cross them while moving ahead. On reaching the end, the player needs to touch the red flag and come back following the same path”, explains Triho. “So easy!” says Cirha.  “It is not so easy as it looks. Come, I will show you”, explains Triho.

Triho and Squarho take Cirha to the practice track. They ask her to observe the track carefully, “Oh no! The track is very long and there are so many hurdles. How will you cross these many hurdles?” questions surprised Cirha. 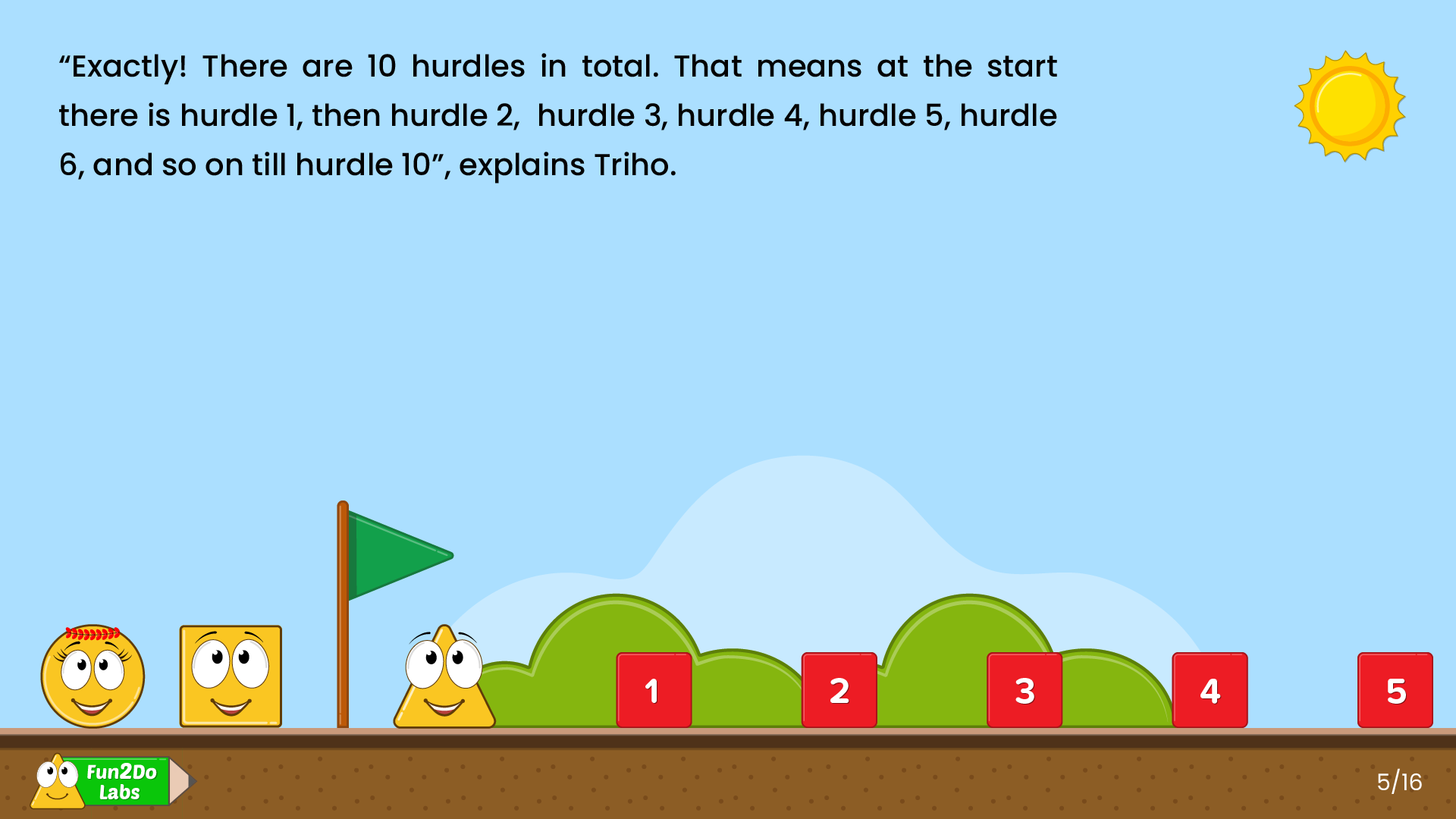 “After passing through all the hurdles, we need to touch that red flag and come back to the starting point by following the same path. This time the hurdles will be reversed”, says Triho.

“Oh yes! While coming back, your hurdle will begin from 10, then decrease to 9, 8, 7 so on till 1. Am I right?” asks Cirha. Both of them agree with her. They continue practising, and Cirha supports them. 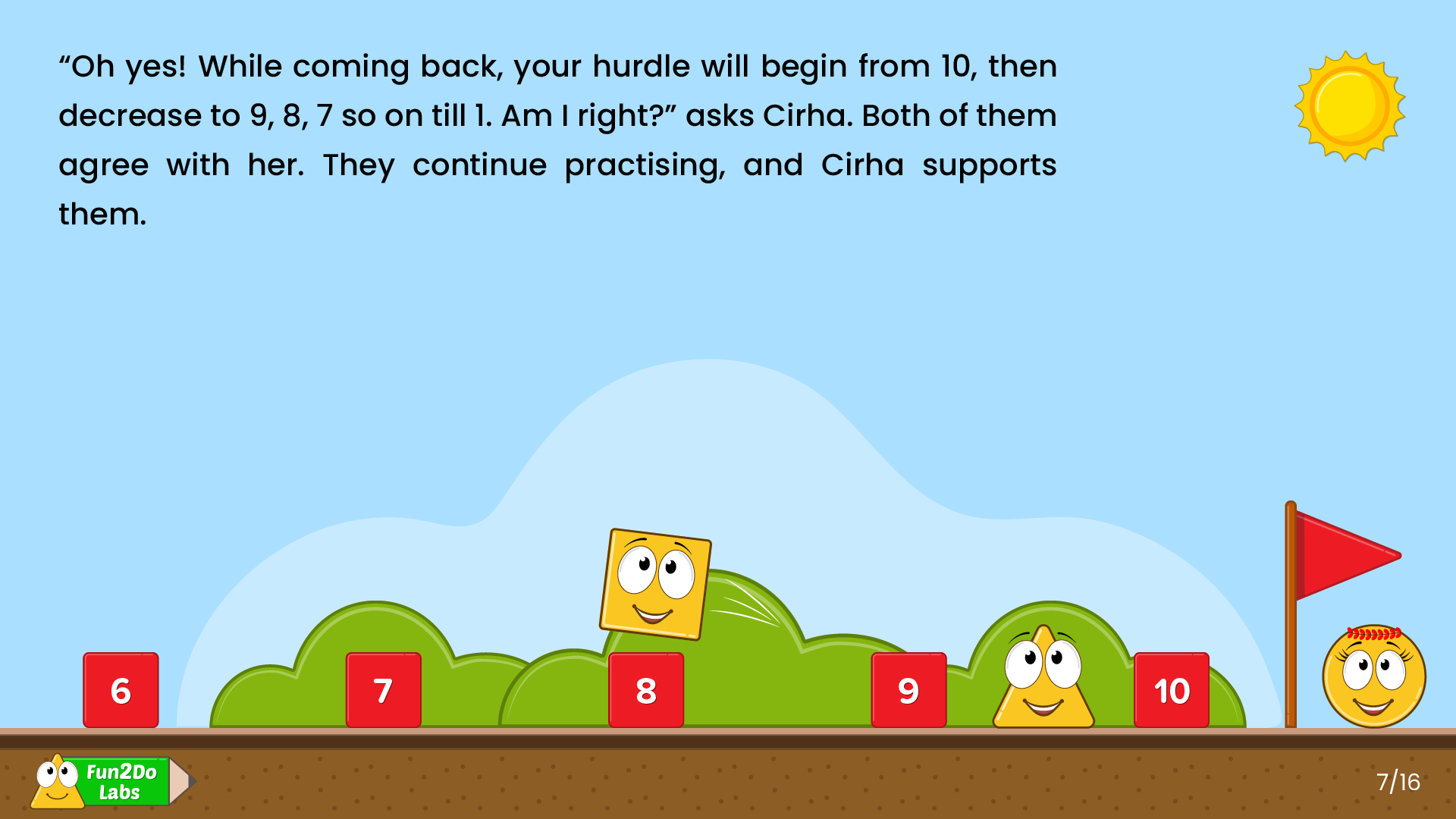 It’s tournament day. The race is about to begin. Cirha wishes them good luck as they take their positions.

The red flag is shining bright on the other side. Triho is almost about to cross the 10th hurdle. “Bang!” everybody hears a loud sound. Triho has hit the hurdle and fallen down. Cirha is worried. She cheers him up and encourages him to continue his race.  Meanwhile, Squarho has managed to touch the red flag already. 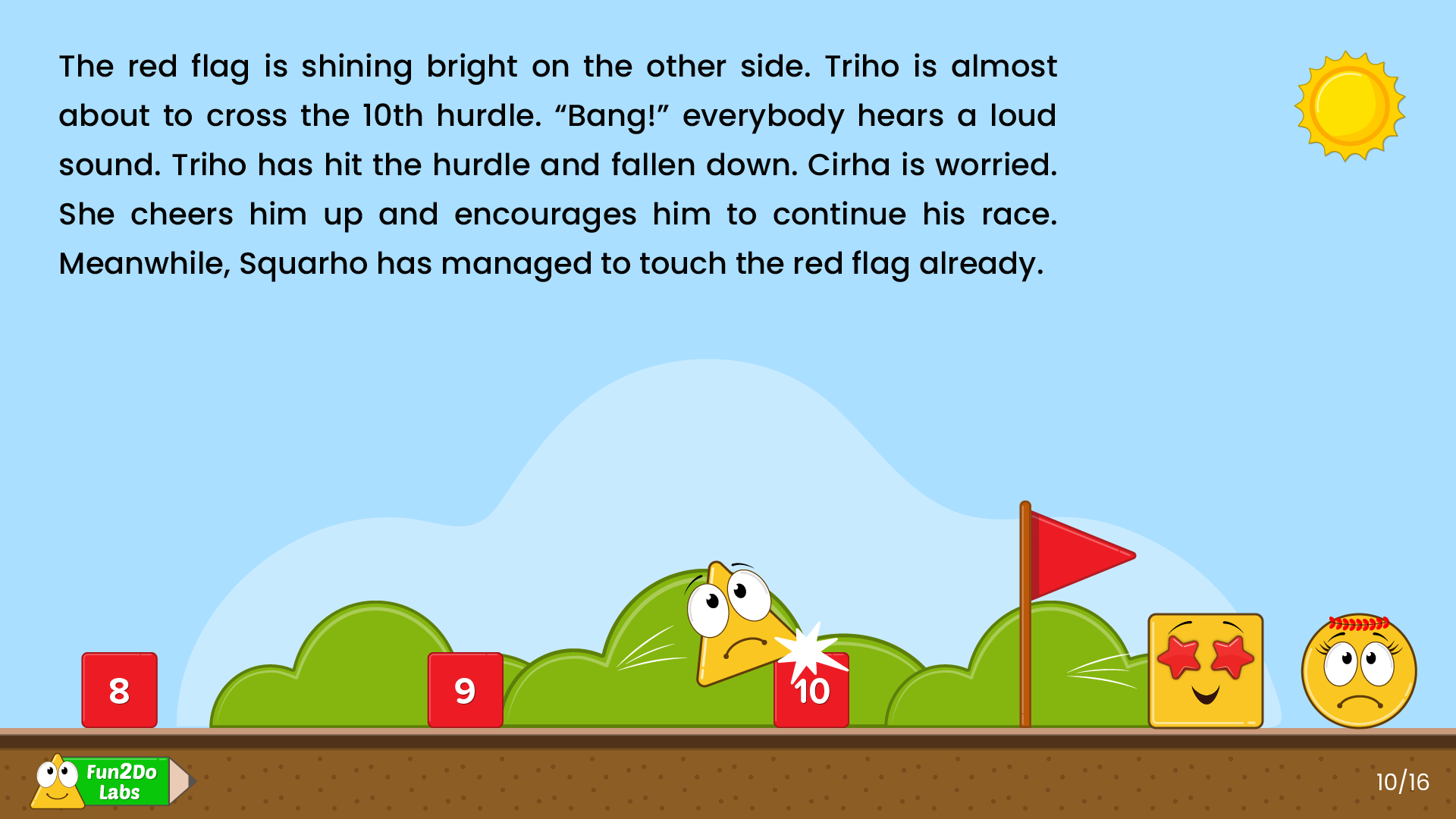 Triho musters all the courage and starts running again. This time he puts in all the more force to cross the 10th hurdle. “Swoosh!” He crosses the hurdle this time and quickly touches the red flag. Now, he starts running back.

While coming back, he crosses the 10th hurdle first, then 9, 8, 7, 6, and so on till 1. Despite the fall, Triho was able to complete the race. But, Squarho has already won it.

“I am sorry. I could not win the race!” says Triho. He is disappointed. Cirha hugs him and calms him down.

“You had fallen badly during the race. Despite that, you continued and completed the race. This is more important than winning. We are extremely proud of you Triho!” says Cirha. Squarho also offers his trophy to Triho. Finally, he smiles but denies accepting the trophy. They have fun with each other and walk back home.