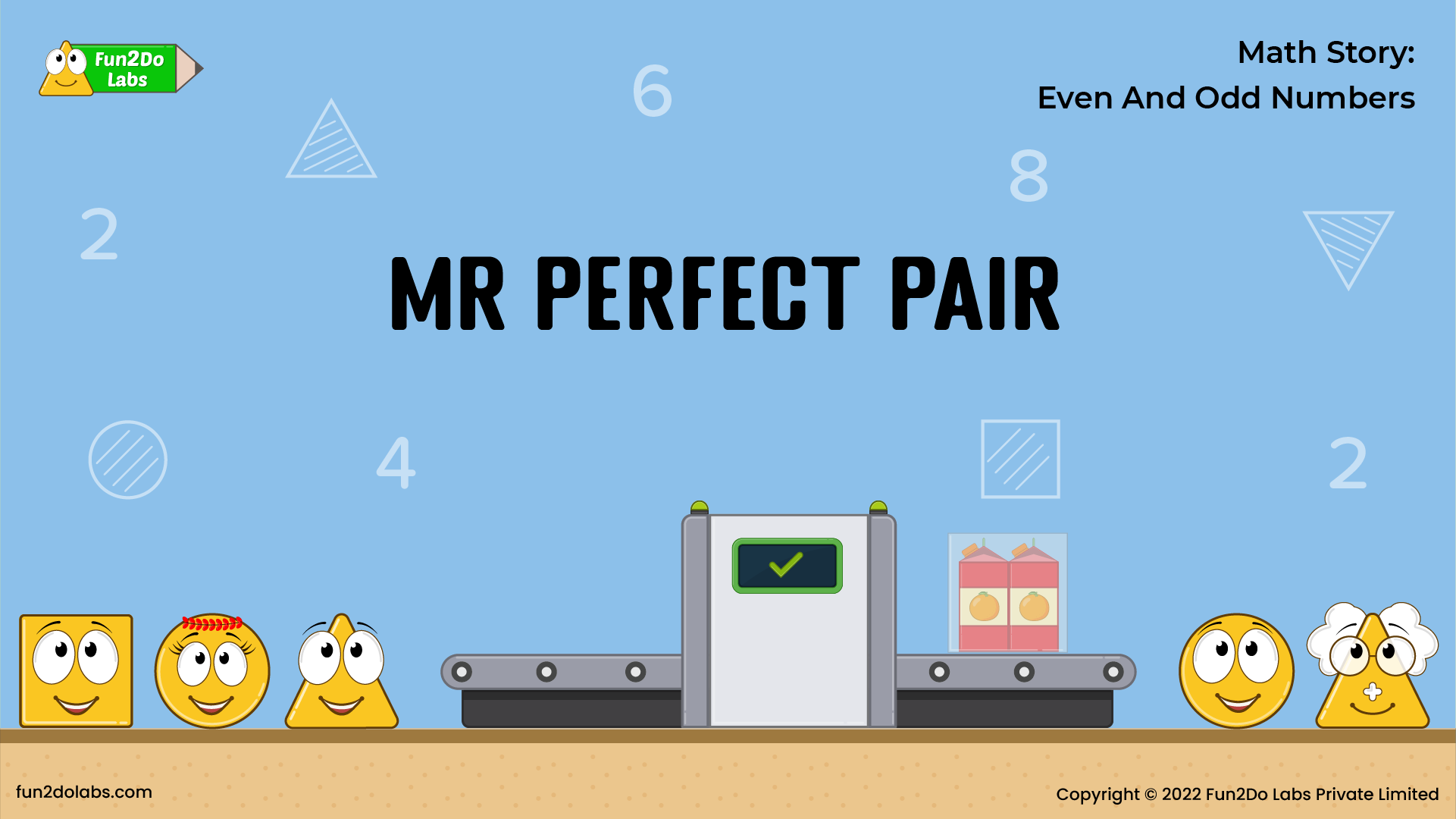 Topic: Even And Odd Numbers

Uncle Math is really busy. It looks like he is designing something. Come on, let us find out.

“Hello, Uncle Math! What are you doing?” ask the kids. “I am designing a new gadget that will help the people of Samper town to pack their objects faster”, he answers. The kids are curious.

“This is Mr Perfect Pair! It packs all the objects in pairs,” explains Uncle Math. “Pair? What is that?” questions Squarho. “Set of two makes a pair”, he answers. “Wow!” utter the kids looking at the unique Mr Perfect Pair.

Cirho gets excited.“We also want to try Mr Perfect Pair on some objects,” he says. Others agree with him.

“Alright! Here are some juice packets. You need to put the packets from one side and collect them from the other side. Okay?” instructs Uncle Math and continues his work.

Cirho goes first. He takes just one juice packet and puts it in Mr Perfect Pair.

The juice packet does not get packed. Cirho is disappointed. “Haha! loser Cirho” mocks Squarho and pushes him away to try his hands on the gadget. 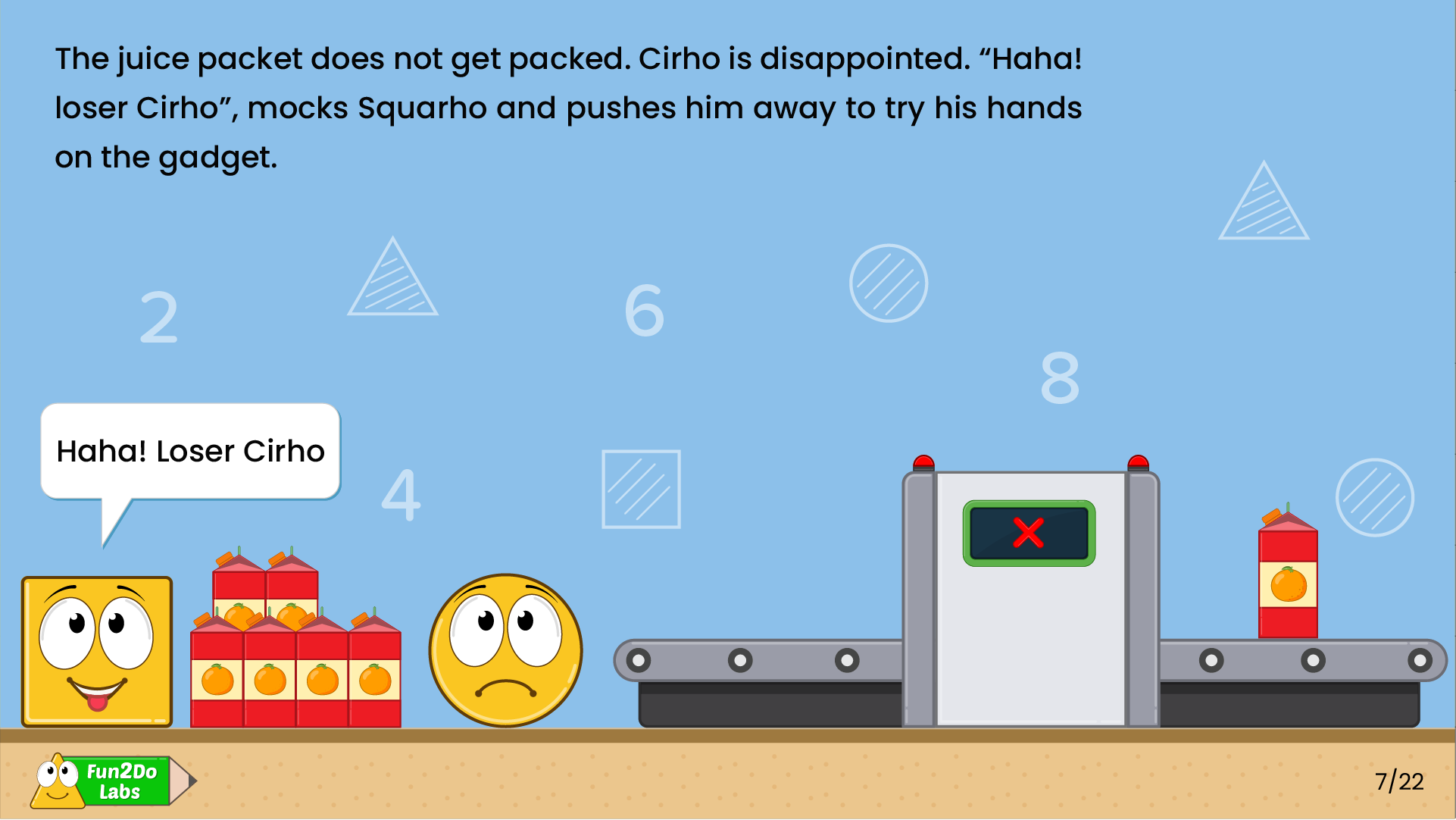 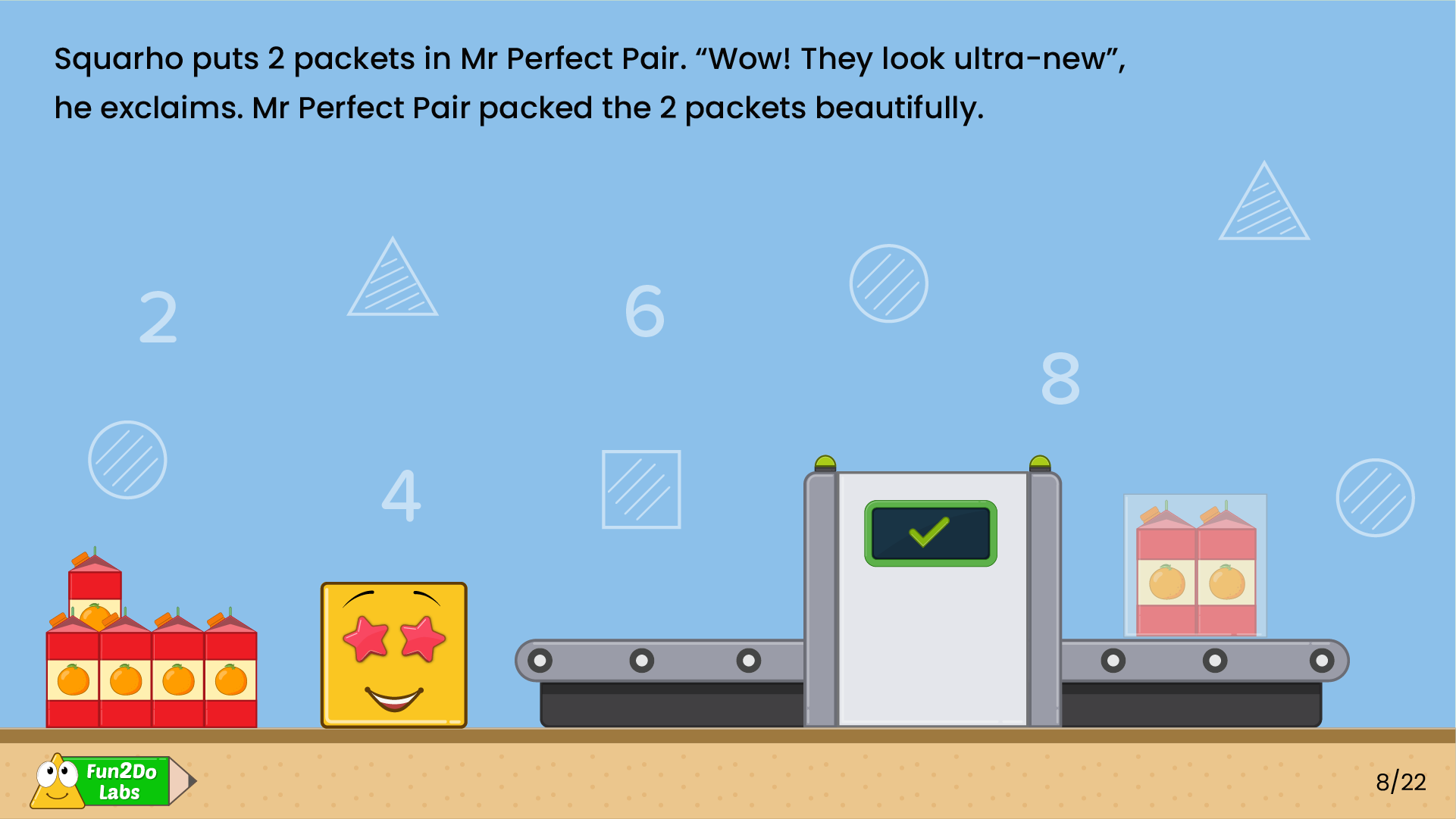 Cirha goes next. “I will put 3 juice packets”, she says and grabs the packets. 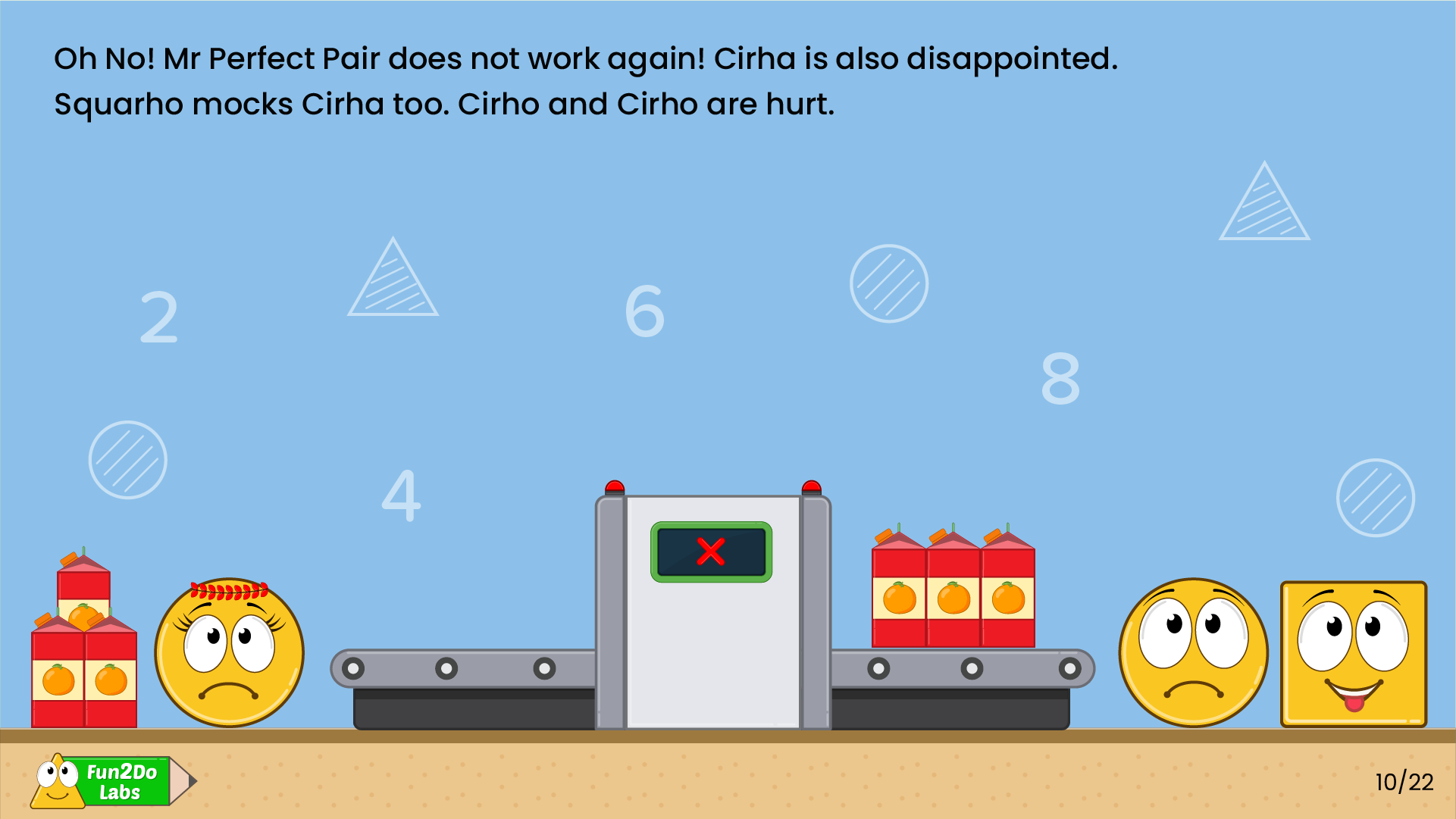 It is Triho’s turn now. He puts 4 packets in Mr Perfect Pair. Do you think it will work?

Of course! Mr Perfect Pair packed the packets beautifully again. Cirha is frustrated now. “Mr Perfect Pair is partial Uncle Math. It works only for Triho and Squarho. Not for Cirho and me. Bad Perfect Pair”, she says. 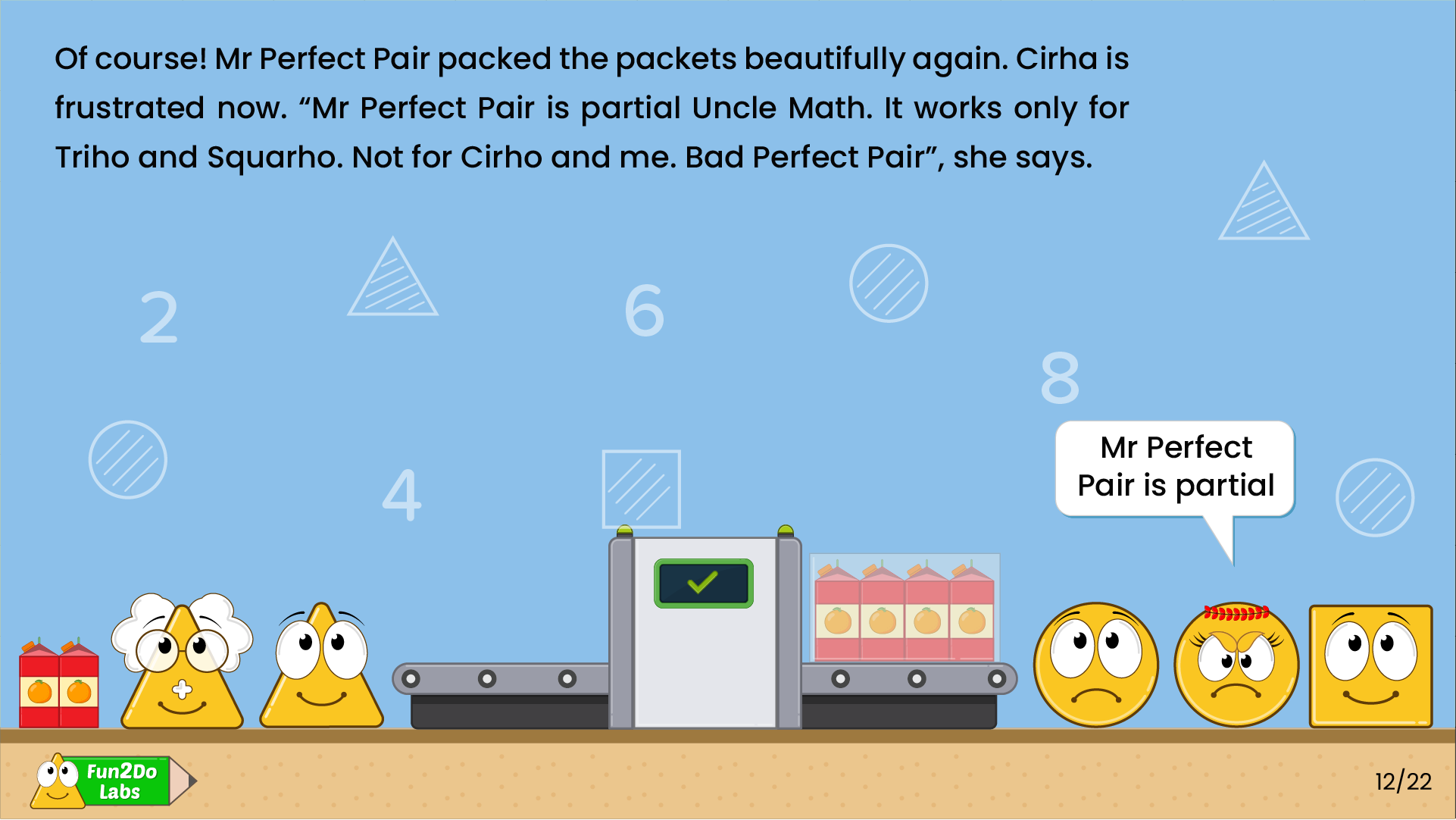 Hearing this, Uncle Math stops his work and comes near them. He asks Cirha to explain her reason for calling Mr Perfect Pair partial. She narrates everything with disappointment. “Haha! Cirha, you’re angry for no reason”, laughs Uncle Math.

“You forgot that Mr Perfect Pair packs the objects only in pairs. To make a pair, you need a set of two packets. When Cirho put 1 packet, it was not a pair. Whereas when Squarho put 2 packets, they formed a pair.”

“Similarly, when you put 3 packets, two of your packets could form a pair, but still, one would be left? And finally, when Triho added 4, the packets formed two pairs and came out packed”, explains Uncle Math. 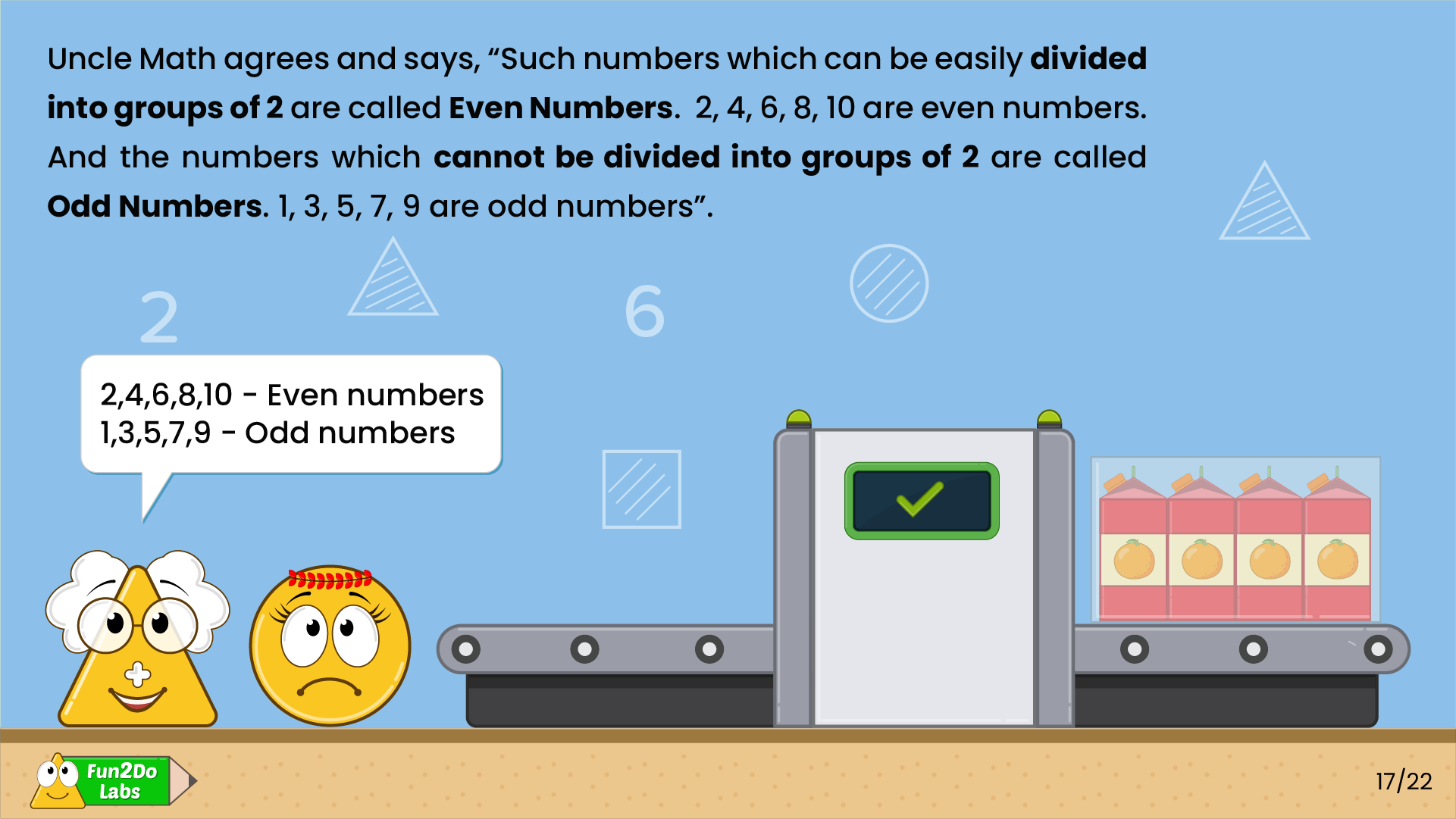 “That means Mr Perfect Pair takes only even numbers. It does not take odd numbers”, says Triho.

Uncle Math agrees and appreciates him. But, Cirha and Cirho are still upset.

“They must be upset because of Squarho”, thinks Triho. He asks Squarho to apologize for teasing and being rude to them. Squarho realizes his mistake and apologizes without hesitancy.

“Bullying is wrong. Any act that hurt others and their feelings are wrong. Remember that!” says Uncle Math. Squarho learnt his lesson. Now, it is time for some more even and odd experiments with Mr Perfect Pair.