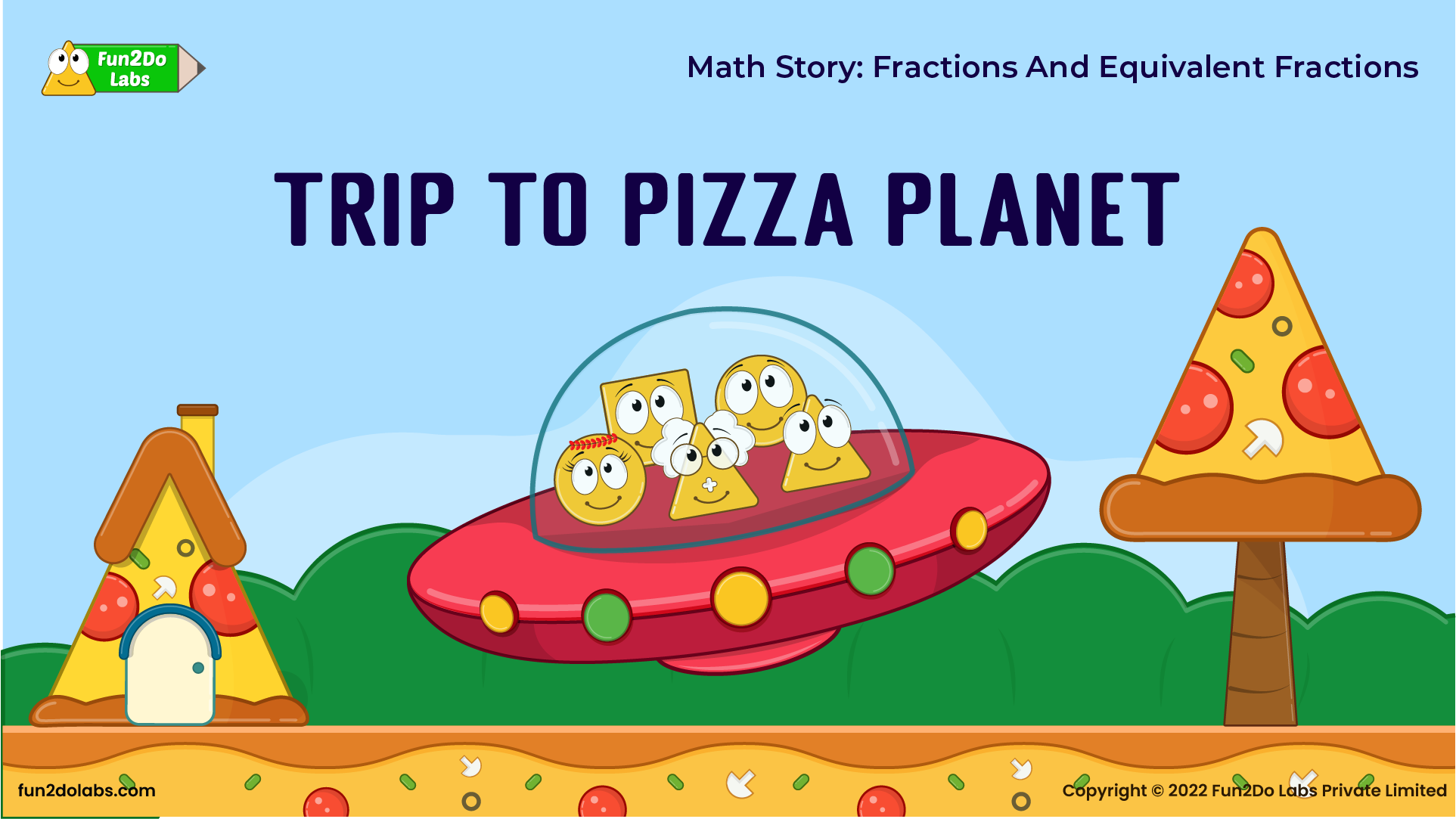 There is worst drought on Earth. Everybody is tensed. “Before the situation gets worst day by day. We need to get more food to feed our people”, says Triho. Others agree with him and think of various solutions to the problem. “Alright! I know what to do”, says Uncle Math. He asks the kids to follow him. What is he thinking?

“Where are we going? And why?” asks Cirho. “We are going to the Pizza Planet”, replies Uncle Math. “What? Pizza? Yummy!” says Squarho. He is already drooling. “Oh! So we are going to get food from Pizza Planet?” guesses Cirha. Uncle Math nods in agreement.

“Wow! So much pizza”, says Squarho. The Pizza Planet is full of pizza trees, pizza houses and many more objects. “I am so hungry. Can I eat these pizzas?” says Cirho. “Yes! We are hungry too”, say the kids together. “Alright! I will give you one pizza. But share it equally among all four of you. Okay?” says Uncle Math. The kids nod in agreement.

Uncle Math quickly grabs a whole pizza and gives it to the kids. The kids are delighted.

“How can we divide it such that we get an equal share?” asks Squarho. “It is simple. Since the pizza has 8 slices, each of us gets 2 slices”, says Triho. Perfect! The kids cannot wait anymore and start eating quickly. 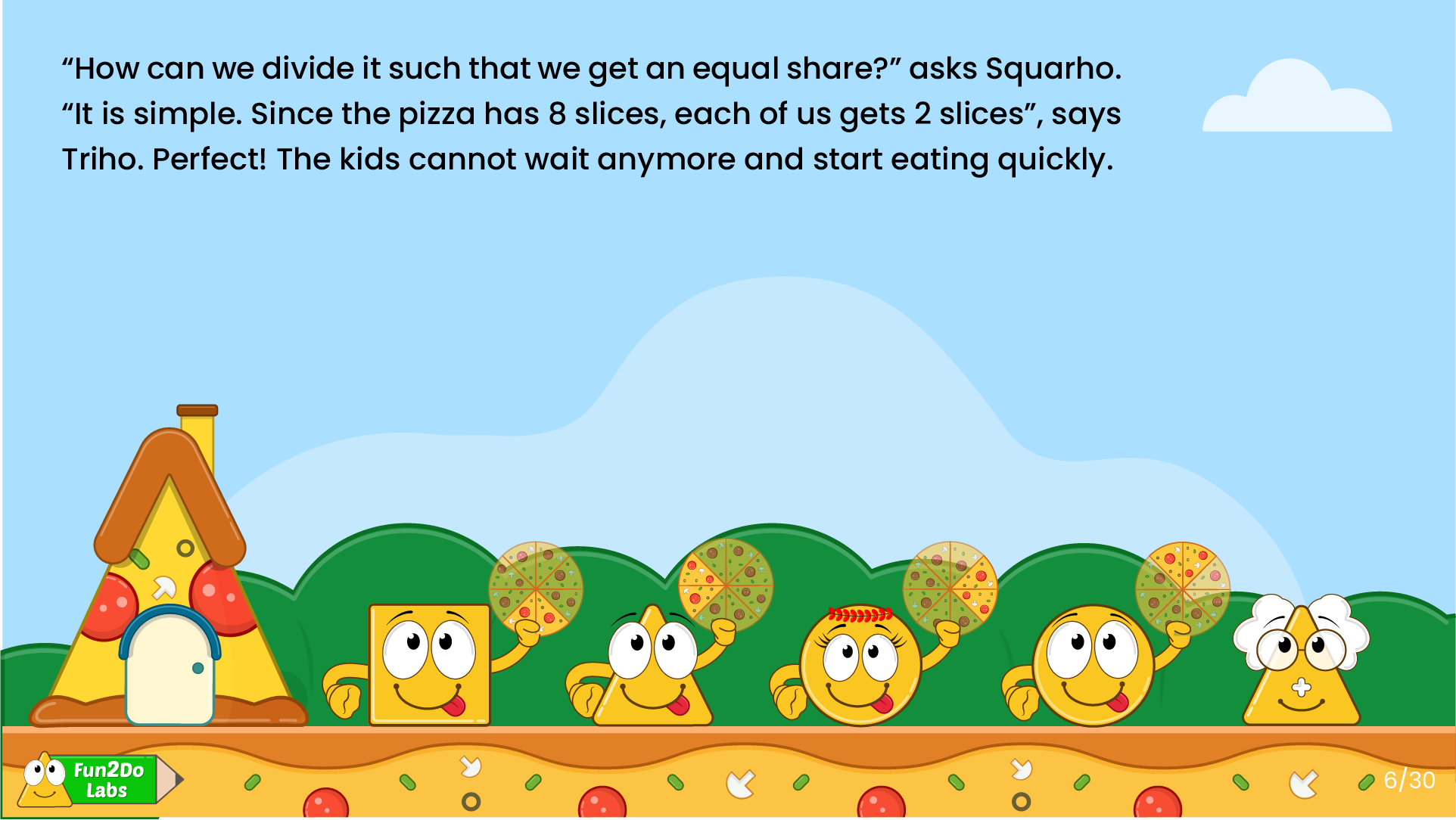 “Haha! You all look so cute eating the pizza. But can you tell me how many slices did you eat out of the whole pizza?” asks Uncle Math. “Triho just said the same thing right. 2 slices out of 8 slices”, says Cirho. “Exactly! This can be written as 2/8. That means each of you ate 2/8th of the whole pizza”, explains Uncle Math.

“2/8th? What does that mean? Is it a new kind of number?” asks Cirha. “Yes! This is called a fraction. Whenever we have to denote a small portion of a whole, we use fractions, just like 2/8th slices of whole 8 slices is eaten by each of you,” adds Uncle Math. 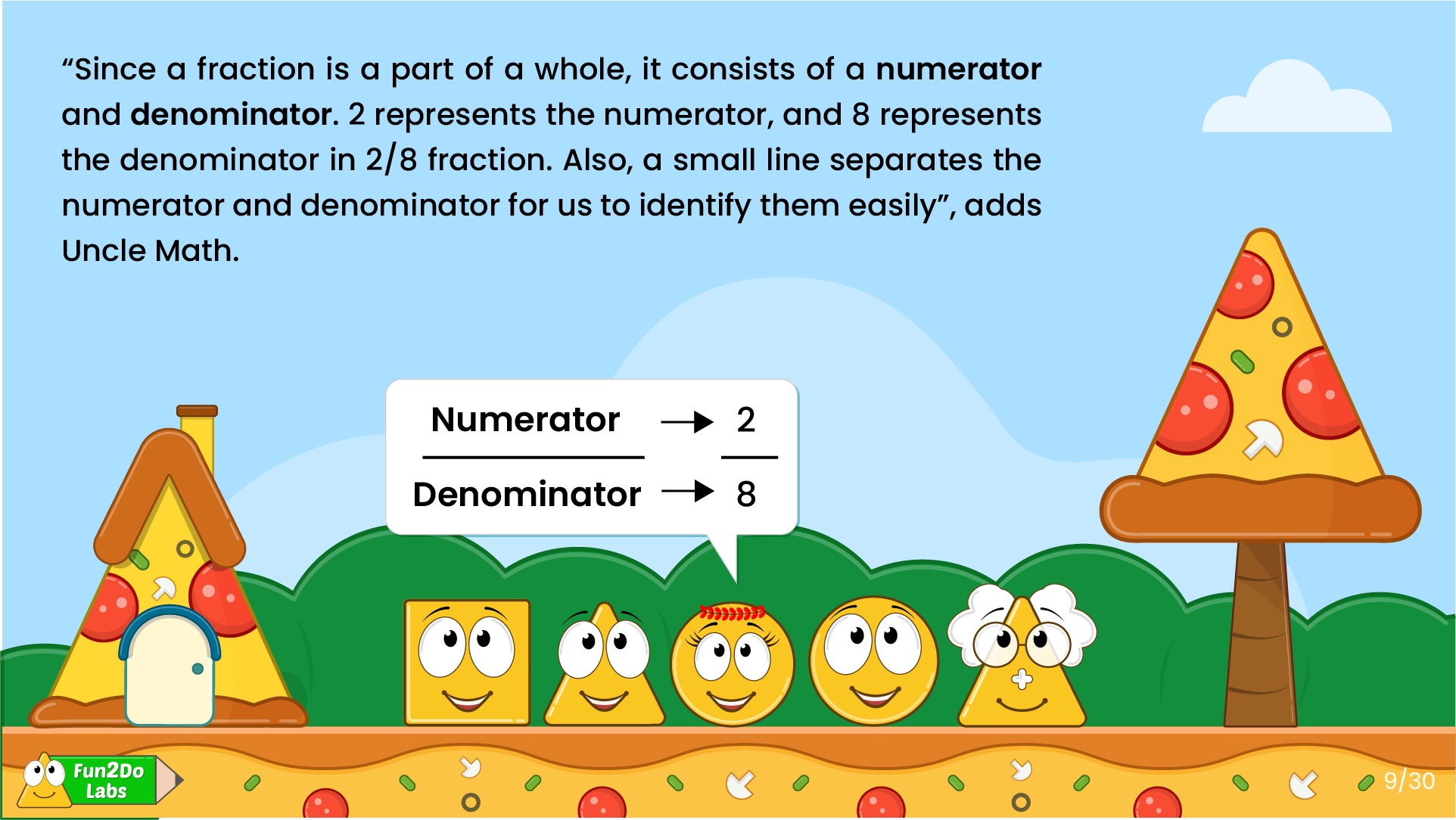 “Haha! Sure”, says Uncle Math. Without wasting time, Squarho quickly grabs the pizza and says, ”This pizza has 4 slices. So, If I eat one slice, then it will be 1/4th of the pizza. Correct?” Uncle Math bursts into laughter and says, ”No dear! A fraction represents equal parts of the whole. Since these pizza slices are not equally divided, this is not a fraction”. 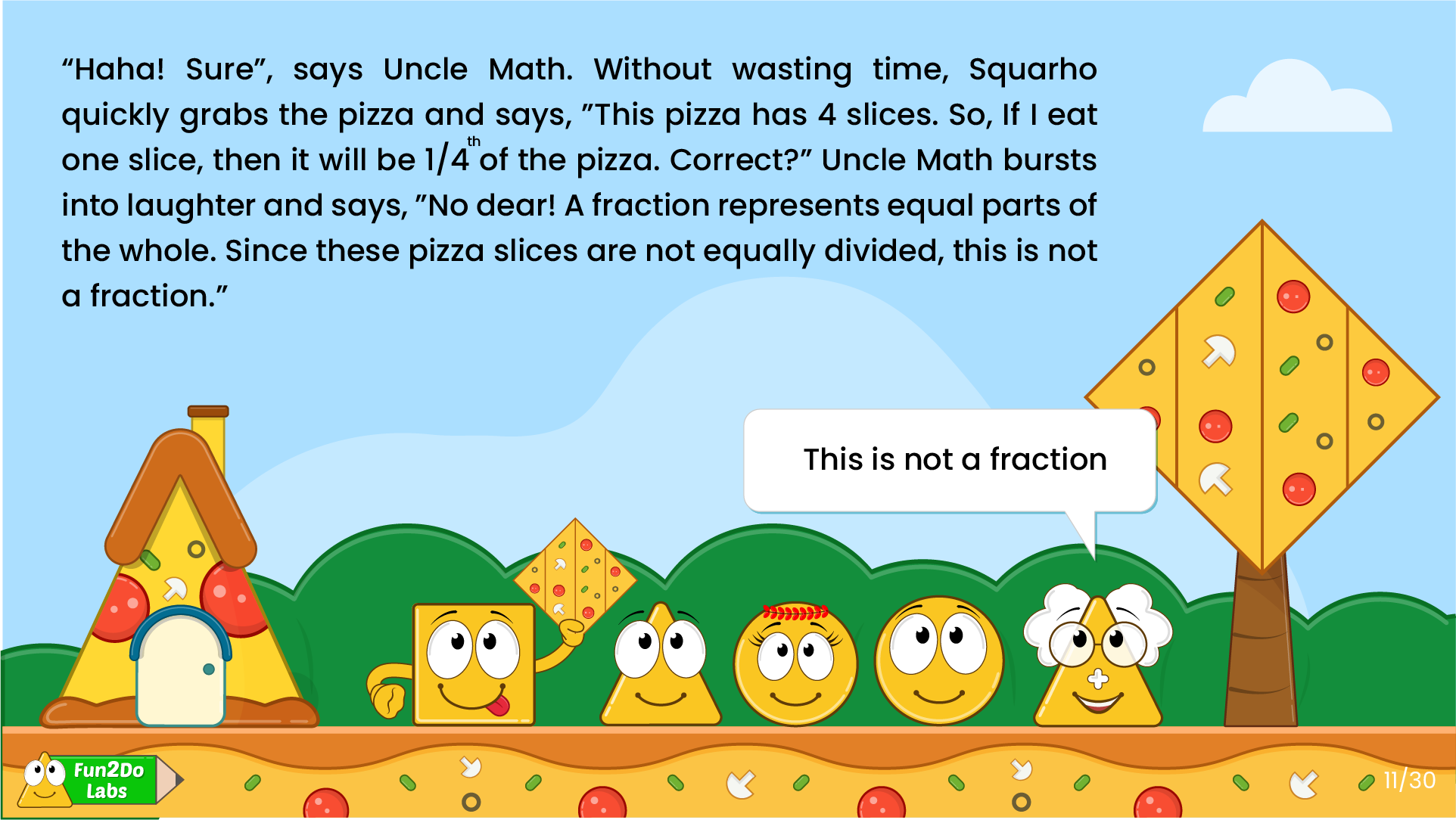 The kids are all clear now. There is no confusion now. They continue to explore the land and identify their fractions. Walk, walk and walk. They walk for a very long distance.

“How long do we have to walk? I am hungry again”, says Squarho. Haha! Squarho and his love for food is immeasurable. “Yes! I am also so hungry that I can eat a whole pizza”, says Cirho. “Alright! I will give each one of you a whole pizza to eat. Happy now?” says Uncle Math and grabs some pizzas to give the kids.

But suddenly, Squarho discovers something. “What! I am left with one slice. But others have many remaining. I got a pizza with 2 slices, whereas others got 4, 6 and 8. Does that mean I got less pizza ?” he thinks. Furious with the unfair treatment, he questions Uncle Math, ”I know that I eat a lot. But that does not mean you can be unfair to me. Why did you give me less pizza?”

“What? Uncle Math is never unfair. There is some misunderstanding”, says Cirha. “Haha! Yes, there is one. Squarho the size of the pizza is the same. It is just that you ate 1 slice of pizza out of 2. Whereas Cirho has eaten 2 slices out of 4, Cirha has eaten 3 out of 6 and Triho has eaten 4 out of 8”, says Uncle Math.

“Now, observe the pieces carefully. What do you see?” he asks. “Oh! We all ate half of the pizza, despite having a different number of slices”, says Triho. “Exactly! You all got 1/2, 2/4, 3/6 and 4/8 pizza. Even when the fractions have different numerators and denominators, you still ate the same amount of pizza”, explains Uncle Math.

“Such fractions that are of equal size but have different numerators and denominators are called equivalent fractions”, explains Uncle Math. “Oh like equivalent in equal!” says Cirha. The kids are amazing at making connections. Isn’t it? 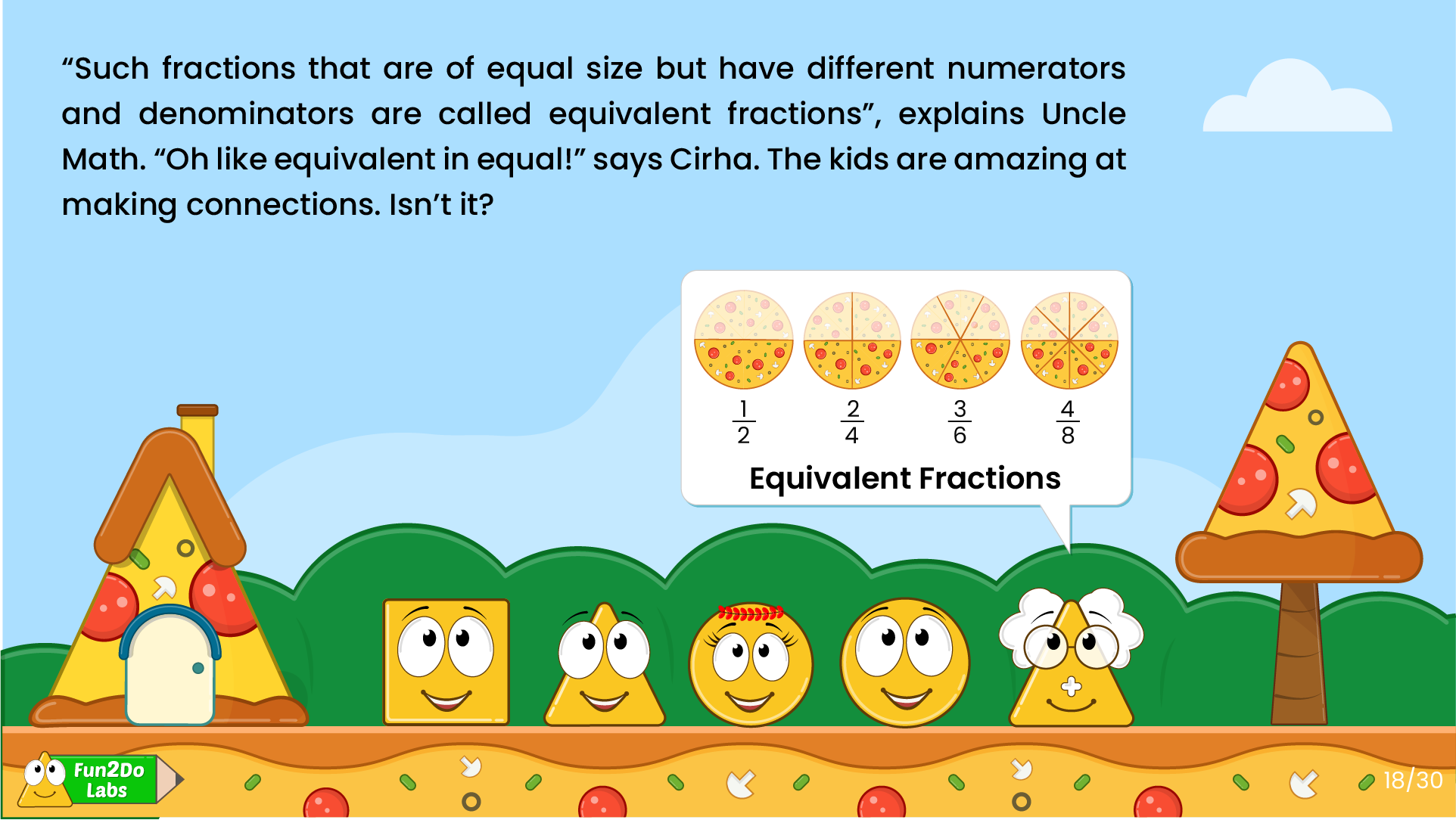 Squarho realizes his mistake and apologizes. Uncle Math forgives him and says, ”Alright! It is time to pack some food and take it back home.” They plan to load the pizzas in their spacecraft to take them home. The kids follow Uncle Math.

“Wow! This much food should be able to feed a lot of our people”, says Triho.

“Haha! Only in your dreams”, says an evil voice. Wondering who is it, everybody turns around. Who do you think might have come? A monster? People from Pizza Planet? Who?

Oh no! It is Atriho. Perfect timing. “Ah! You want to feed your hungry people. Never! I will never let that happen. Your people will suffer”, he says and attacks everyone. 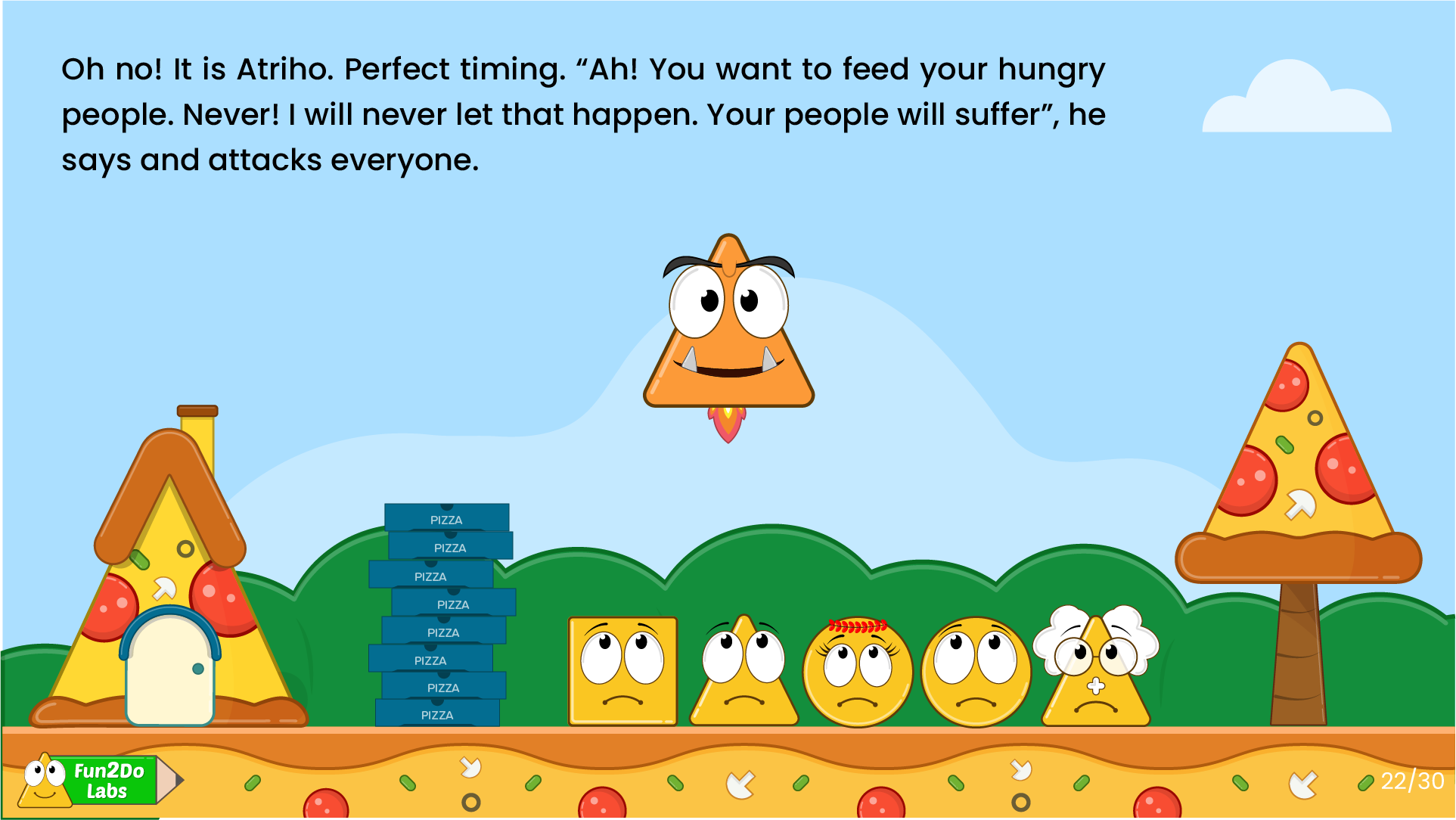 Everybody hides behind the pizza house to save themselves. “I will distract him. Meanwhile, you all can load the food in the spacecraft”, says Triho. Others agree and follow his plan.

“Alright! Defeat me then. Because until I am here, the food is going back to Samper town”, says Triho to provoke him. As expected, Atriho comes to attack him.

Bam! Boom! Crash! Both of them fight profusely. “Argghhh!” screams Atriho and attacks Triho who gets hurt.

But the injury does not stop him. Triho musters all the courage and jumps on Atriho’s head. He immediately falls. Triho manages to defeat him. 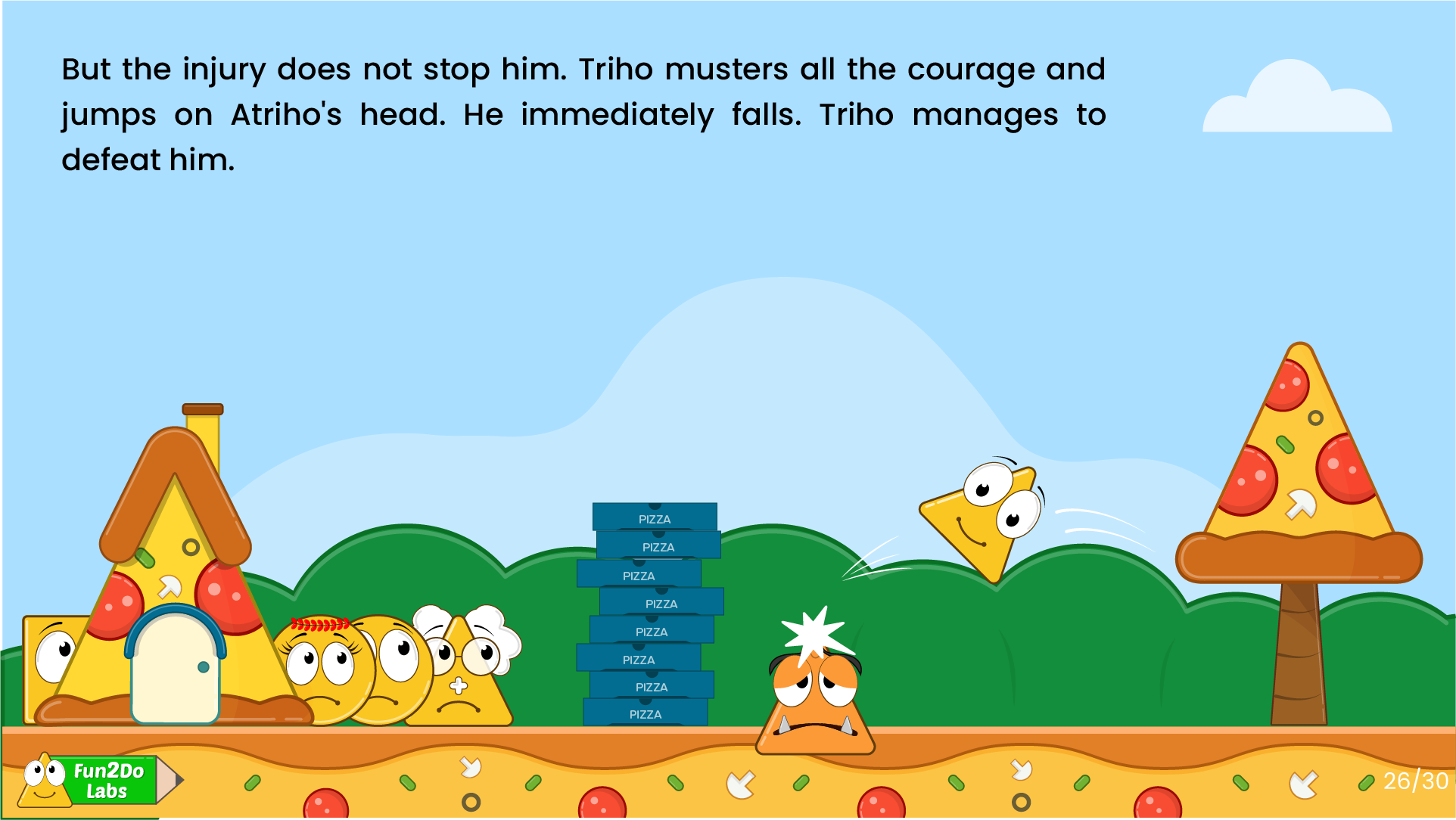 Everybody comes running towards him. “Oh no, Triho! You are badly hurt”, says Cirha looking at him. “Let us get back home first”, he says. Triho’s love for Samper town is immeasurable.

Quickly, they board their spacecraft with loads and loads of pizza. Everybody is happy. Pizza Planet did not just have delicious pizzas but also had many learning opportunities. Fractions and equivalent fractions became so easy because of the pizzas right? Next time you eat a pizza, don’t forget to write its fraction representation.