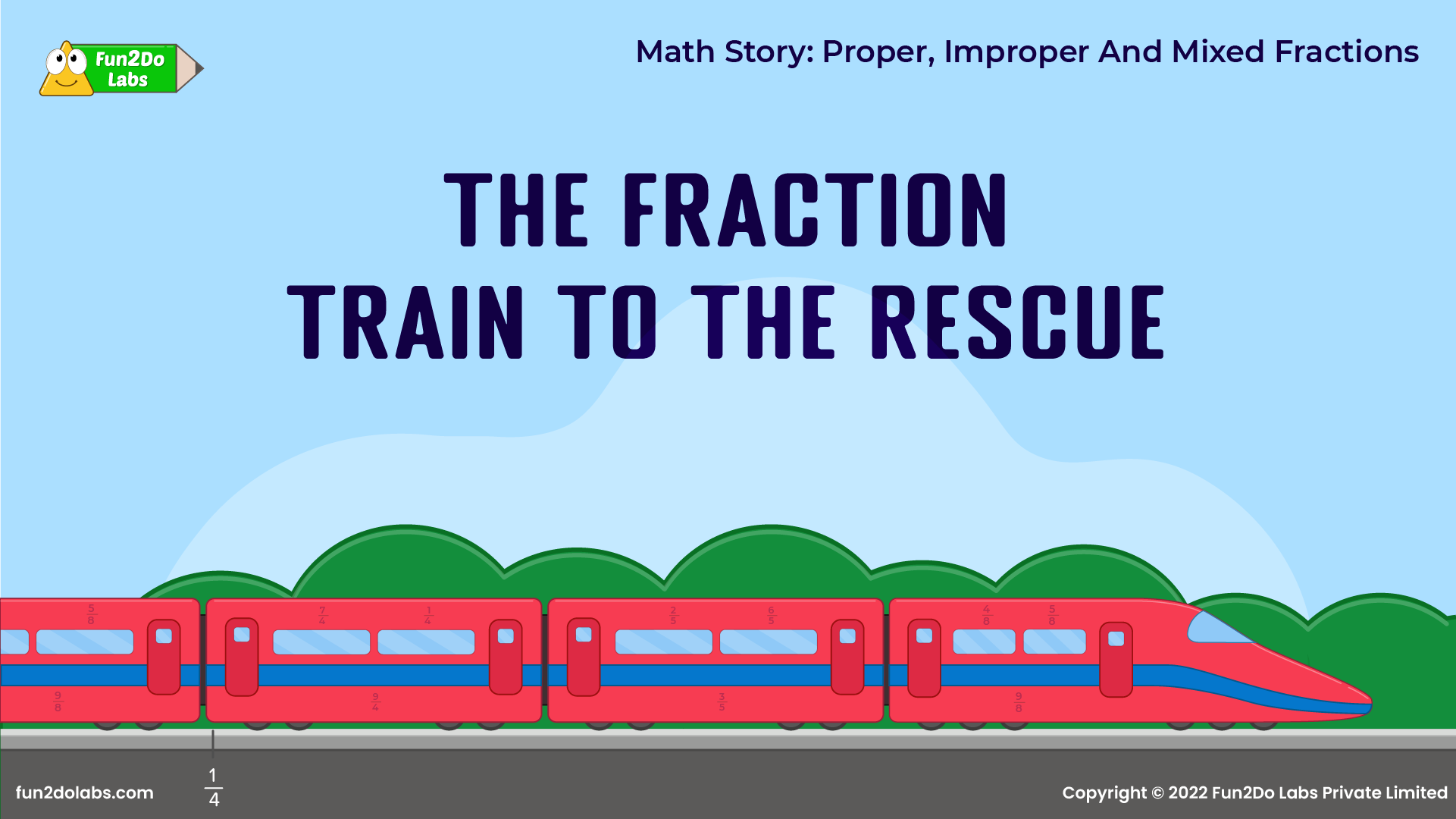 The Fraction Train To The Rescue

“What? The villages are on fire?” asks Uncle Math. “Yes! The fire has caused severe damage. The sky is filled with dark smoke from the fire. People’s lives are at risk. I need your help to save thousands of people”,  says Uncle Science on the phone. Uncle Math is worried. How can he help his friend?

Oh no! Several villages have caught fire near Uncle Science’s town. He is unable to rescue people and is asking for help from Uncle Math. 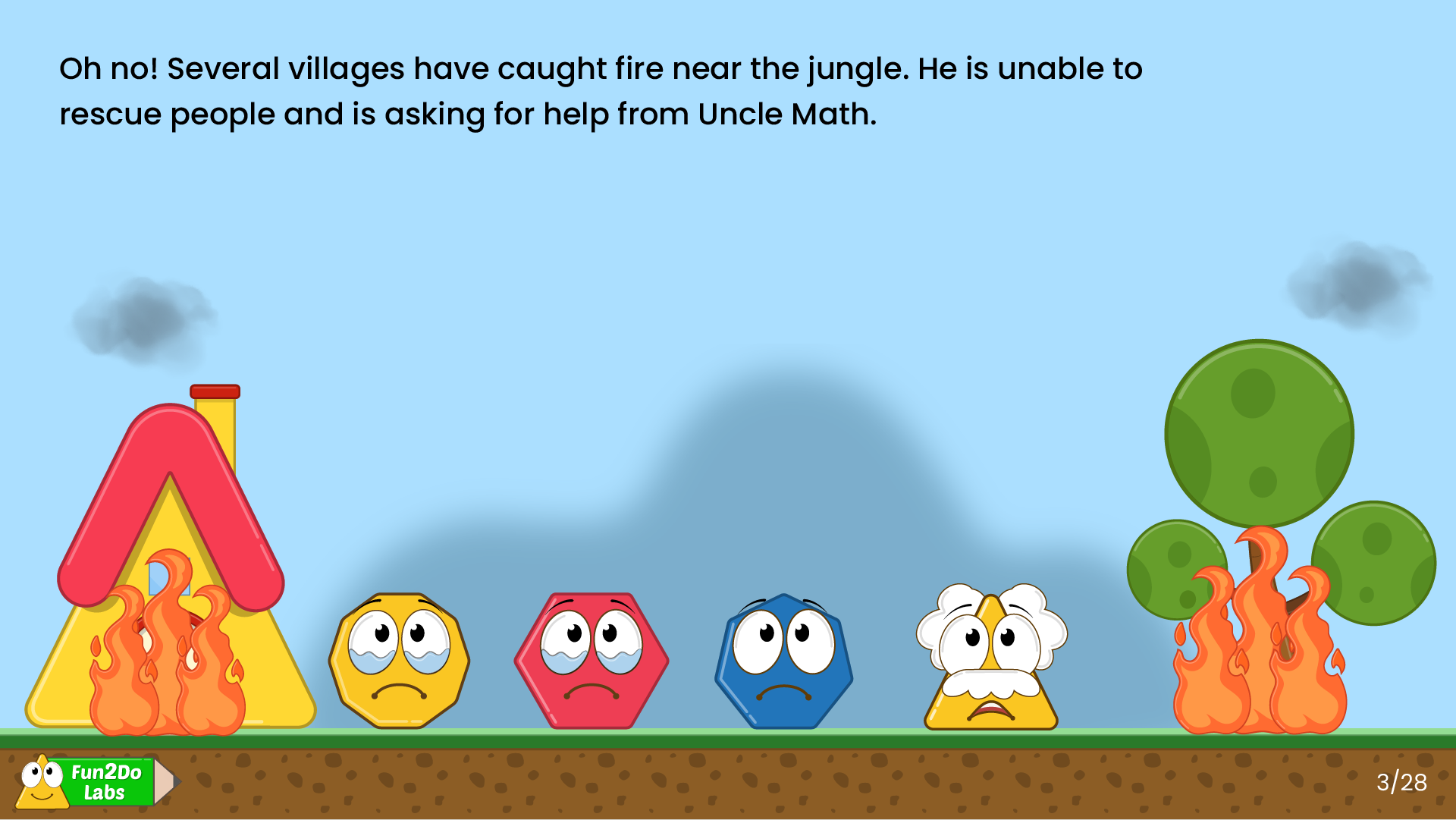 Seeing Uncle Math so sad, the children decide to help in whatever way they can. “Let us go to their town in our spacecraft and save people”,  says Cirha. “But the sky is filled with dark smoke. Going their through spacecraft will not be safe and we will not be able to board thousands of people in one spacecraft “,  says Triho. How can they reach Uncle Science and save people?

“Idea! We will go there by train”,  says Uncle Math. “Train? Is it another mode of transport?” asks Cirha. “Yes! It is a series of connected cabins that are pulled by an engine. These cabins will also help us accommodate thousands of people. Since you haven’t travelled by train before, I will take you along with me”,  he says. The kids are thrilled.

Pum Pum! Honks the engine. The kids are excited to travel through a new mode of transport. This journey is going to be different for them. Uncle Math hopes that his friend is safe, and together they can save many victims. 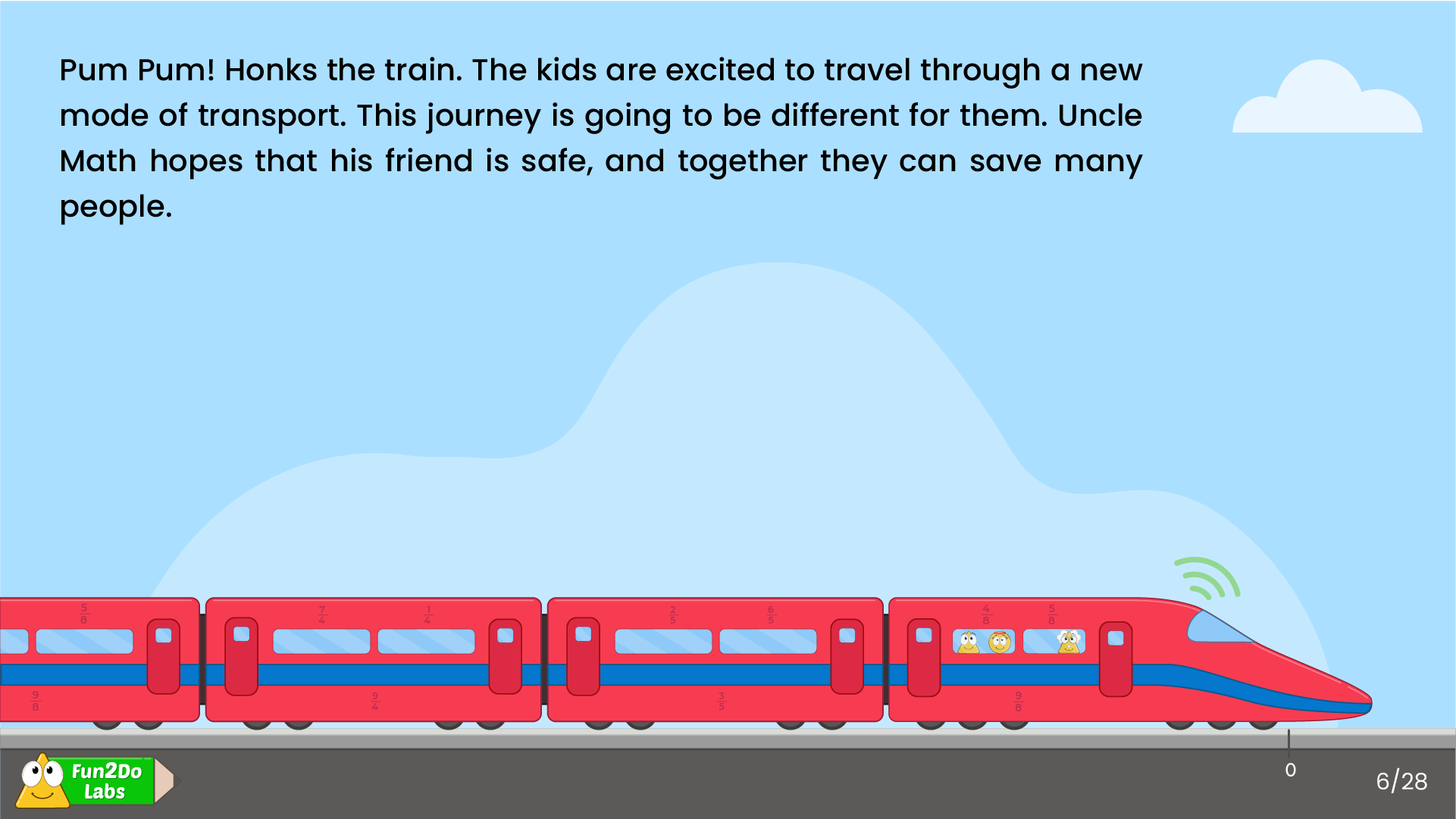 “Alright! Let us begin”,  says Uncle math. He inputs 3 and 4 and starts the engine. Hurrah! The kids are thrilled.

“Uncle Math, why do 3 and 4 look different here? ¾ is it a new type of number?” asks curious Triho. “Great observation, Triho. ¾ is a fraction. Because this is a fraction train, it takes the distance in terms of fractions”, explains Uncle Math.

“¾ is the location of first village. So I entered the same in the engine.  “But how do we know the locations of villages?” asks Cirha. He takes out a mini-map of the route and asks the kids to observe the track carefully. 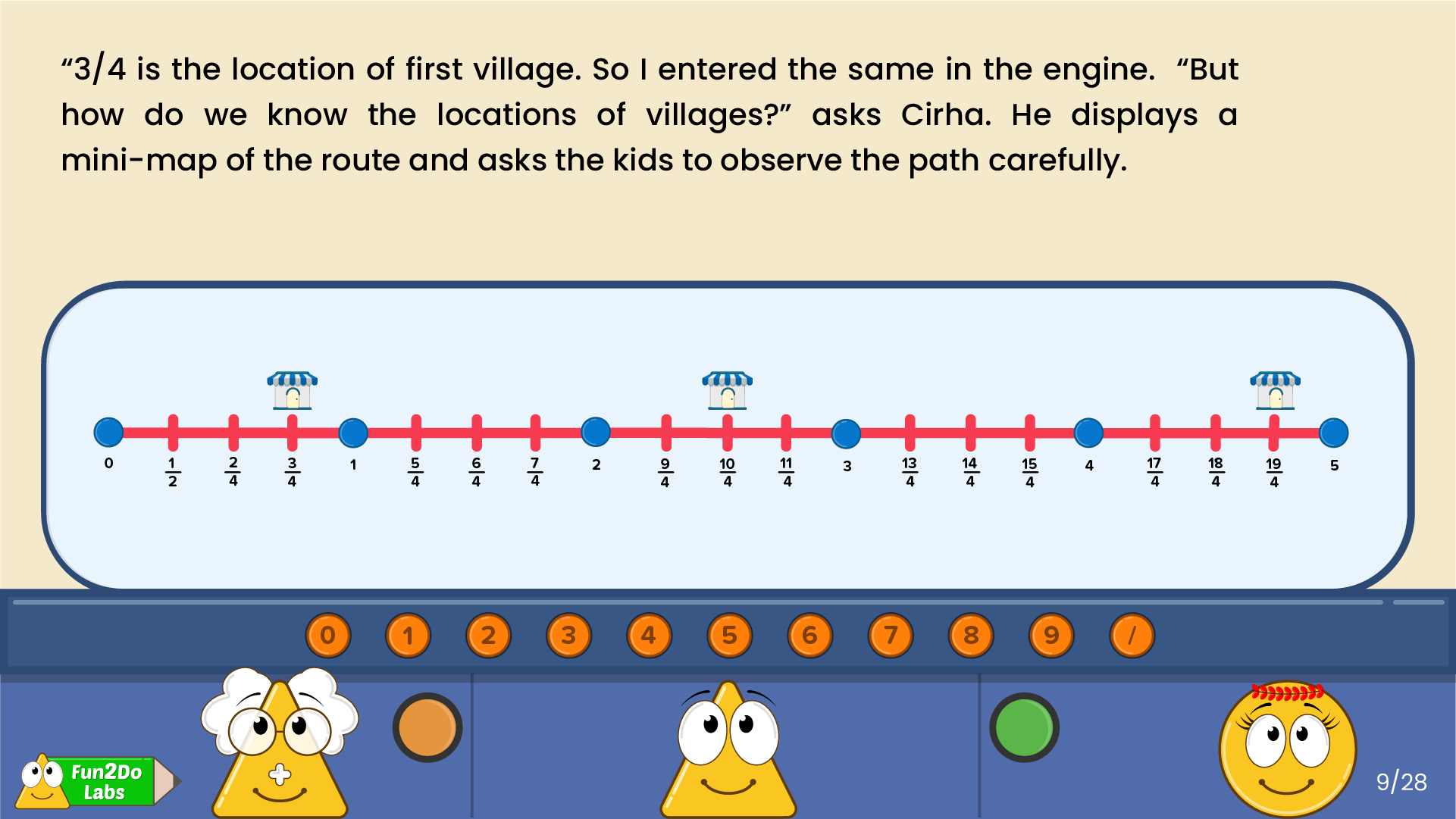 “Oh! There is a village on ¾, 10/4, and 19/4″,  says Cirha looking at the map. “Oh yes! But as we are moving ahead, the numerator is increasing while the denominator is still the same. Why so?” asks Triho. “That is an interesting question”,  says Uncle Math.

“As you can see, our track is made up of wholes. Each whole has 4 smaller and equal parts. So if we start at 0, ¼ is the first distance that we covered, which means we travelled 1 part out of the 4 parts. Similarly, when we are at the 3/4th part. So that means we have covered 3 parts out of the 4 smaller parts”,  explains Uncle Math. 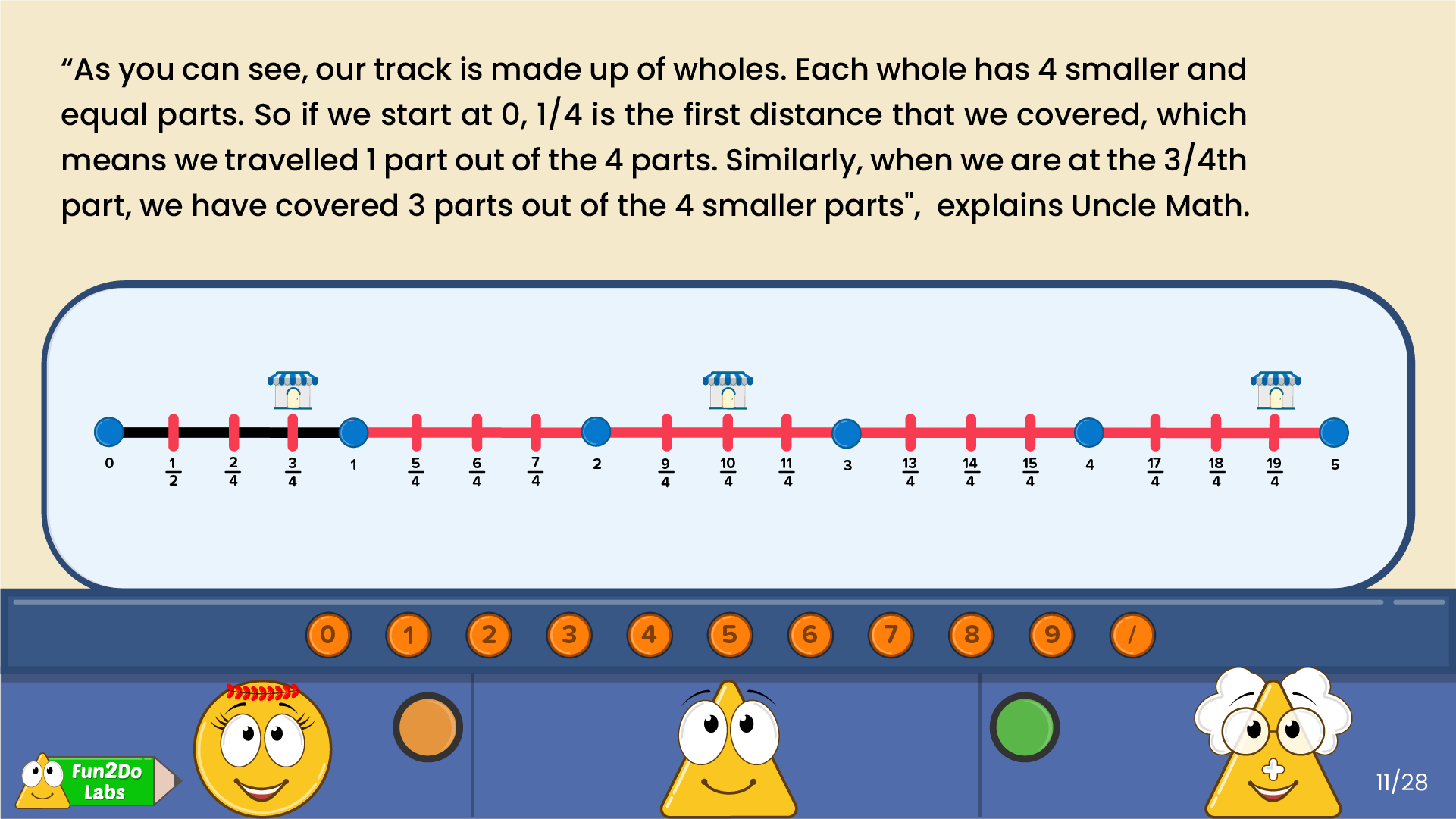 “Amazing. So when we cover 4/4 distance, we would have covered all the 4 smaller parts making us cover 1 whole”,  says Cirha. “Exactly! Also, look Cirha, all these ¼, 2/4, ¾ fractions are greater than zero but lesser than one because we did not cover the one whole”,  says Triho. Uncle Math is amazed at the way kids make connections.

“Exactly! Such fractions where the numerator is smaller than the denominator are called Proper fractions. All the proper fractions are always less than 1″,  adds Uncle Math. The kids now understand everything.

Soon the first village arrives. Uncle Math and the kids get out of the train and board as many people as possible.

The kids are having fun understanding the different types of fractions. “There is something special about improper fractions. This 10/4 can also be written as 2 2/4. Can you guess why?” asks Uncle Math. “Oh I know!” says excited Cirha. “10/4 covers 2 wholes and 2 parts are remaining”,  she says.

Soon the first village arrives. Uncle Math and kids get out of the train and board as many people as possible. Phew! This mission is getting bigger and bigger.

Pum! Pum! The loud horn of the engine is so funny. It is time to enter the next village number. “19/4″,  enters Triho. Can you convert this improper fraction into a mixed fraction?

Cirha closely looks at the mini map and observes the track. “4 3/4 is nothing but 19/4. Am I right?” she says confidently. Uncle Math agrees with her. “Oh no! I can see the smoke. Have we reached the village?” says Triho. Uncle math quickly looks out to confirm. “Yes! We have. Let us hurry now”,  he says.

This village has had the worst fire breakout. They spot people everywhere. Some are running, some walking and some are crying. “This is so sad. Let us quickly shift them in the train”,  says Triho.

One by one, they transfer the people to the train. Uncle Math and Uncle science are finally relieved. 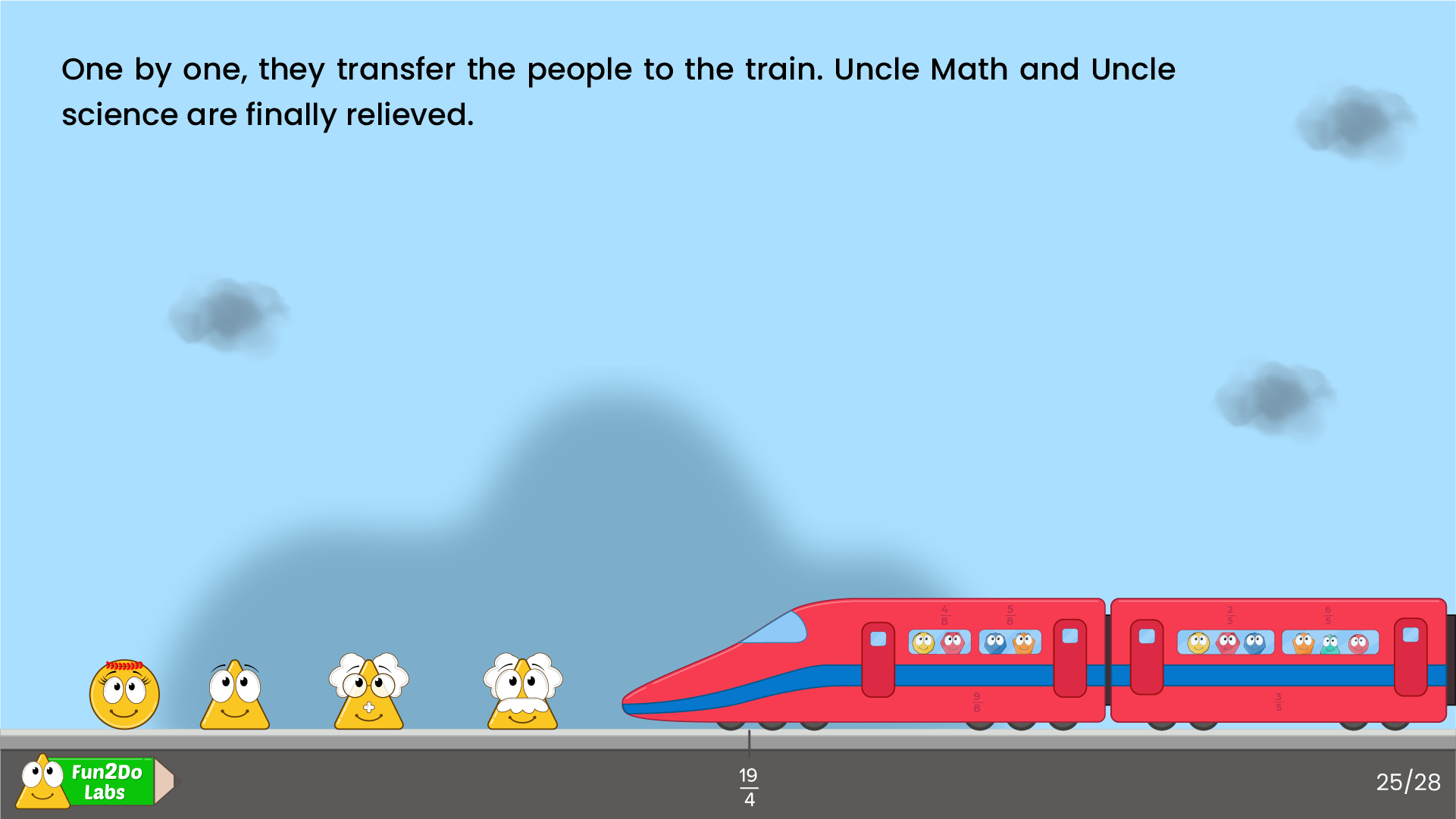 It is time to start the engine again. Pum! Pum! The horn blows. The fraction train is ready to take off with thousands of people. “Hurrah!” says Cirha. This journey did not just get them into a new mode of transport but also taught them proper, improper and mixed fractions. Indeed a beautiful journey.