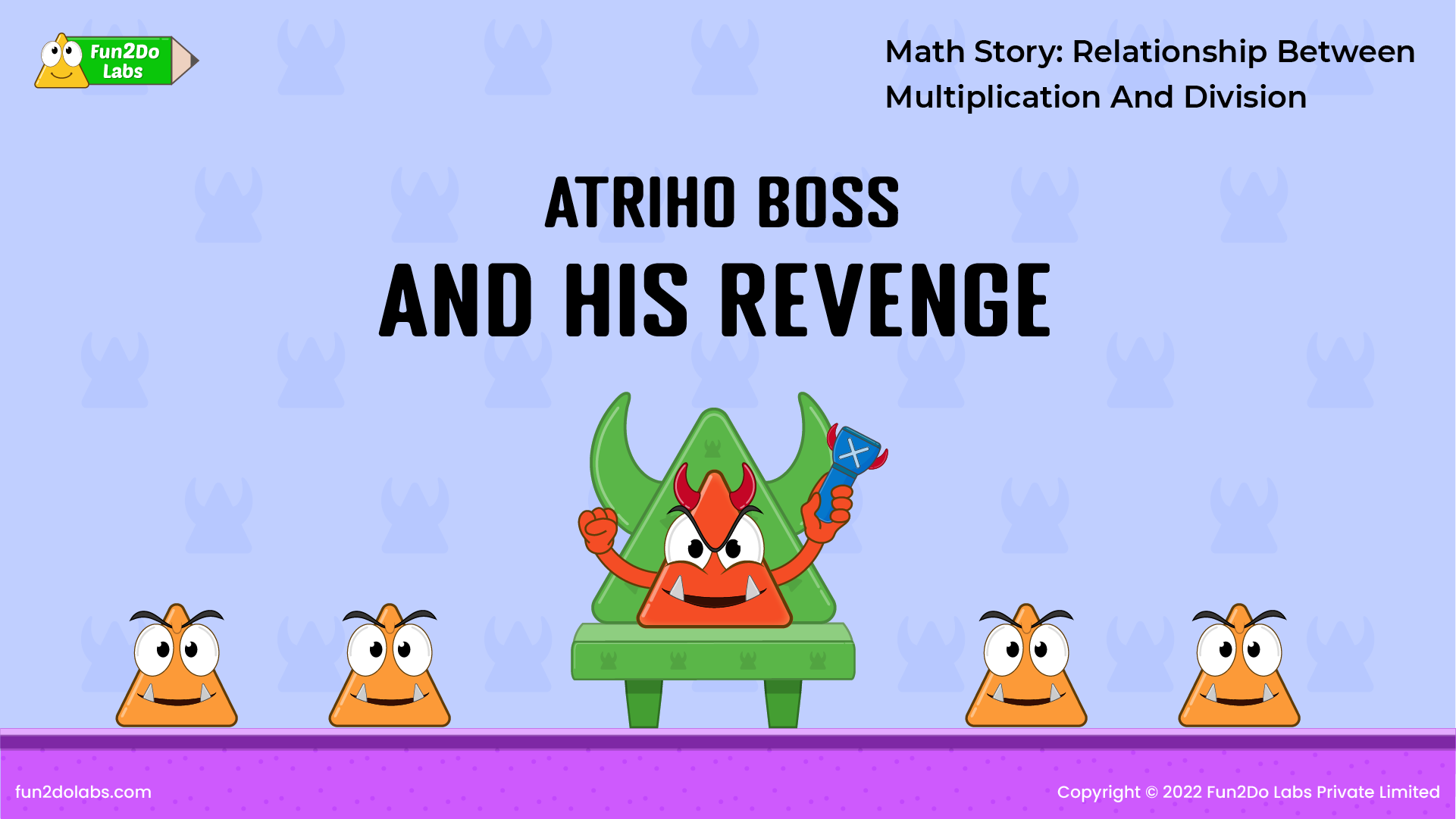 Atriho Boss And His Revenge

Topic: Relation Between Multiplication And Division

“Boss! We could not defeat them”, says Atriho hesitantly. It looks like he and his gang are terrified of their boss.

“You are useless! I will only have to do something now”, says Atriho Boss. He always wanted to win Samper town and make it their capital. But Uncle Math, kids and other teachers always defeat them. Will they be able to save the town from Atriho Boss again?

Atriho Boss is in his lab. What is he up to? “Haha! I am the boss! The smartest villain you will ever come across”, he says, holding a torch like an object in his hands. ”What is this boss?” questions Atriho. “This is Mr Multiplier! I have designed it to multiply the count of things. Let me show you”, he says

He holds Mr Multiplier and says, “Multiply the glasses with 2”. The sharp red light of Mr Multiplier falls on the 3 glasses placed on the table. The 3 glasses double to 6 now. Atriho and the gang are amazed. Atriho Boss is happy.

“Wow! You’re a genius boss. But how will this help us win Samper town?” asks Atriho.

“I am the boss! The smartest villain you will ever come across! I will use Mr Multiplier to increase our army. When we attack Samper town with a big army, Uncle Math and the kids will not be able to defeat us”, he says.

To double the army of 4, Atriho boss instructs Mr Multiplier to multiply by 2. There are 8 members now.

To triple the army of 8, he instructs to multiply with 3. Can you guess how many members are there in the army now?

Yes, 24! To increase the army 4 times, he instructs to multiply by 4. Can you guess how many members there are now? Yes, 96!

Beep beep! There is a notification on Mr Messenger. Uncle Math quickly runs to read it. “Oh no! Atriho Boss is coming to attack Samper town with a gadget and an army of 96 members”, he reads. Everybody is worried. “We are just 5 and they are 96. How will we face them?” says Cirho.

“I will go and teach them a good lesson!” says Squarho and rushes to face the army all alone.

“Wait! There is no use of impulsive behaviour now, Squarho. Relax and sit back to think calmly “, says Triho. Whenever in a crisis, do not be impulsive. Take a deep breath, analyze the consequences of the action and decide on the next step.

Suddenly, Uncle Math starts smiling. It looks like he has got the solution. “If Atriho Boss can use a gadget to multiply his army, why can’t we use another gadget to divide and reduce his army?” he says. Everybody loves his idea. They rush to his lab.

Uncle Math designed Mr Division. It looks like a torch.

To test it, they throw the light on a basket of 6 apples and instruct it to divide by 2. Only 3 apples remain. “Brilliant!” say the kids together. They are all set to face Atriho Boss and his army.

As the army enters Samper town, Uncle Math aims the light of Mr Division at them and instructs to divide by 8. The army reduces in a fraction of seconds.

Atriho Boss is dumbstruck. He is unable to understand what just happened. But before Uncle Math could further reduce the army, he gets an idea.“I am the boss! Smartest villain you will ever come across!” he says and uses his gadget to increase the army again.

Seeing this, Trio decides to help Uncle Math. He secretly gets close to Atriho Boss. But what is he going to do? He jumps on Atriho Boss and instructs Mr multiplier to multiply with 0. Bam! The entire army is gone. But how?

“Anything multiplied with 0, the answer is always zero. Triho you’re a genius”, says Uncle math. Everybody celebrates their victory.

“Arghh! Triho and Uncle Math! I will not leave you. I am the boss! The smartest villain you will ever come across! I will come back stronger”, he says and runs away from there.

All of a sudden, Cirha stops celebrating. It looks like she has realized something. “Atriho Boss used multiplication to increase the army, and we used division to reduce the army. Does that mean multiplication and division are opposites?” she asks Uncle Math.

“You are amazing Cirha! Yes, multiplication and division are inverse operations”, says Uncle Math. “That means I can use multiplication to get division answers also. For example, I know 8 & 12 when multiplied give 96. So to divide 96 I can easily use 8 or 12″, adds Triho.

“Exactly! We can solve a division problem by thinking of the matching multiplication. So, if you already know the multiplication tables, the division will be easy and vice versa!” says Uncle Math. The kids are happy.

Awesome! Despite being opposites, multiplication and division always help each other. They are the perfect opposites we will ever come across. Do you agree?