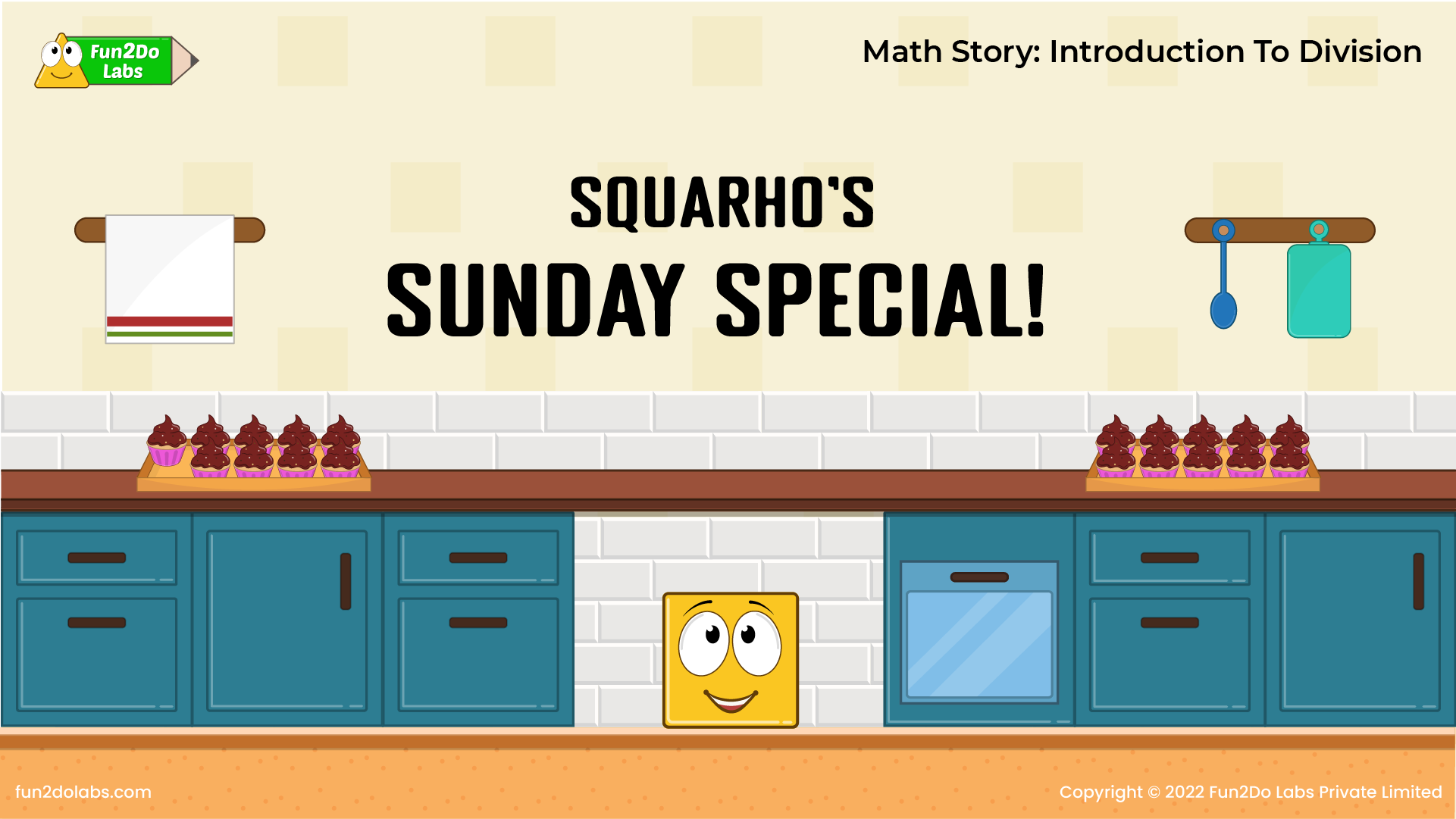 “Woohoo! The cupcakes look delicious. They should be able to fill my stomach”, says Squarho. He is in the kitchen today. Interesting!

It’s a Sunday, and Squarho decides to bake. He bakes 20 delicious chocolate cupcakes. “I am starving! Let me eat some cupcakes now and save some for later”, he says to himself. Swoosh! Here comes the special flying dining table of Squarho. He places a plate of cupcakes on the flying table. 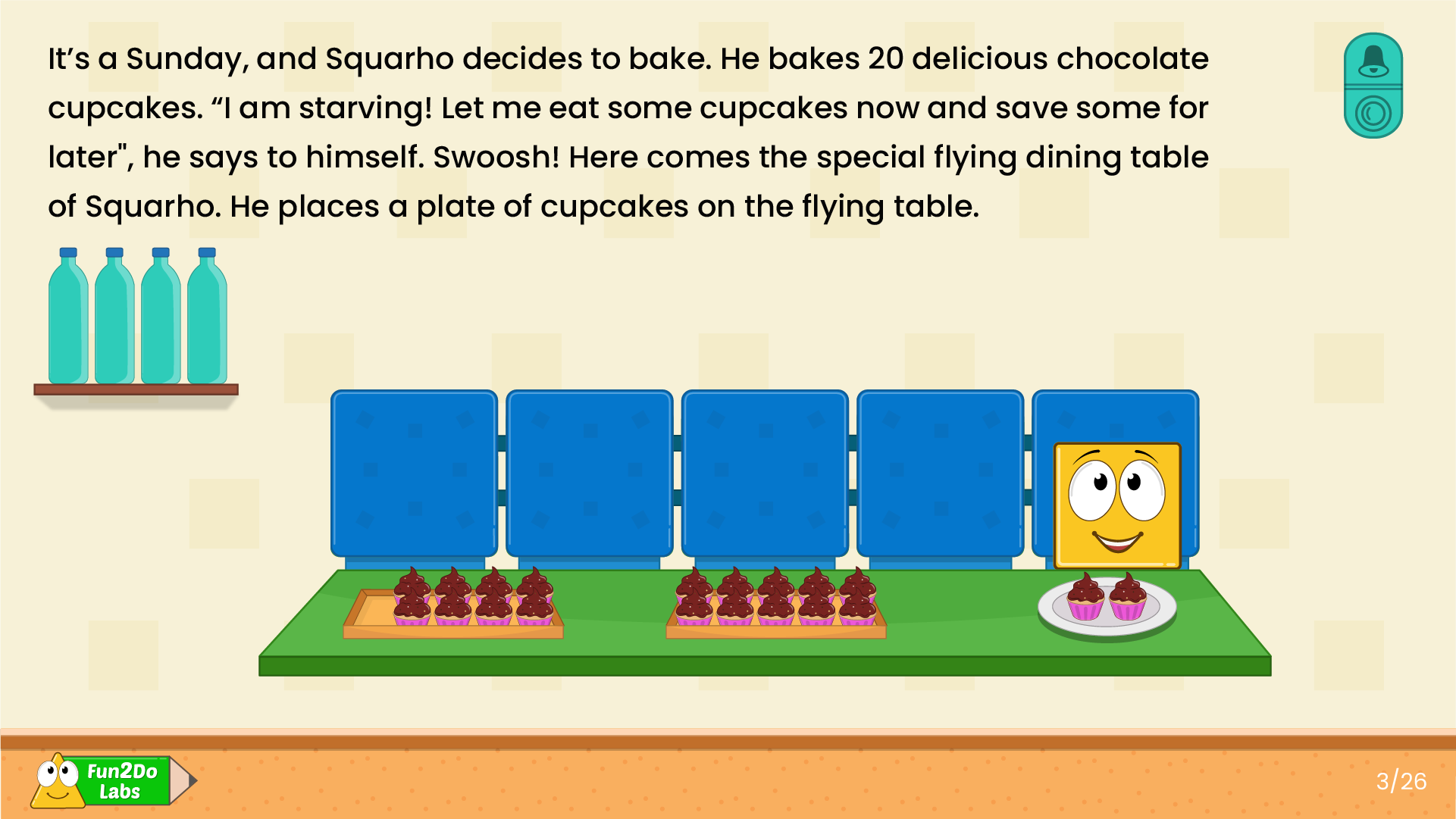 Ding Dong! Suddenly the doorbell rings. “Who must be this?” he says and goes to open the door.

“Hey, Cirho! Come on in”, he says and welcomes him. Cirho joins him at the dining table.

“Wow! Chocolate cupcakes! I am hungry, and the cupcakes look delicious. Can I have some?” asks Cirho. “Oh no! I am hungry too. But sharing these cupcakes will also help Cirho. Let me share them”, thinks Squarho.

“Yes, of course”, he replies. Cirho is happy. Squarho decides to divide the 20 cupcakes equally among the two. “I like to be fair when I share”, he says. He takes 2 plates and starts keeping cupcakes one by one on each plate. Can you guess how many cupcakes each of them got?

Yes! When 20 cupcakes are equally divided between two people, each gets 10 cupcakes.“Amazing!” says Cirho. Both of them are ready to eat. 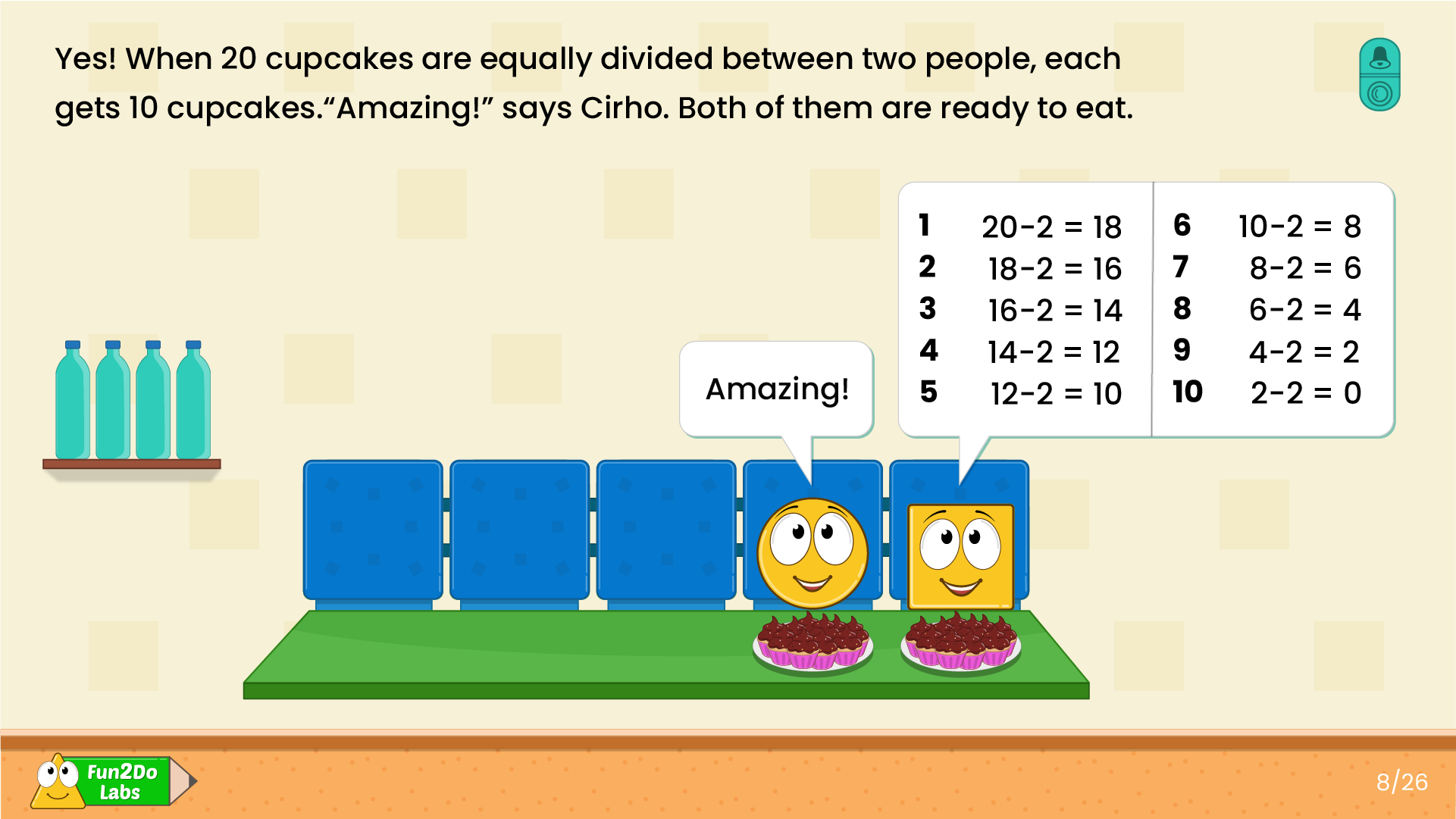 Ding Dong! The doorbell rings once again. “Who is it?” thinks Squarho.

Both of them go to open the door. “Hello!” greet Cirha and Triho together. As it is Sunday, they just came to see Squarho.

“Wow! The cupcakes look delicious”, says Cirha. They also want to eat cupcakes. “I like to be fair when I share”, says Squarho. He places two more plates on the table and starts dividing the 20 cupcakes among the 4. Can you guess how many cupcakes each will get?

When 20 cupcakes are equally divided between four people, each gets 5 cakes. “Phew! This was time taking”, says Squarho. “Come on, let’s eat”, says Cirho. He cannot wait anymore. 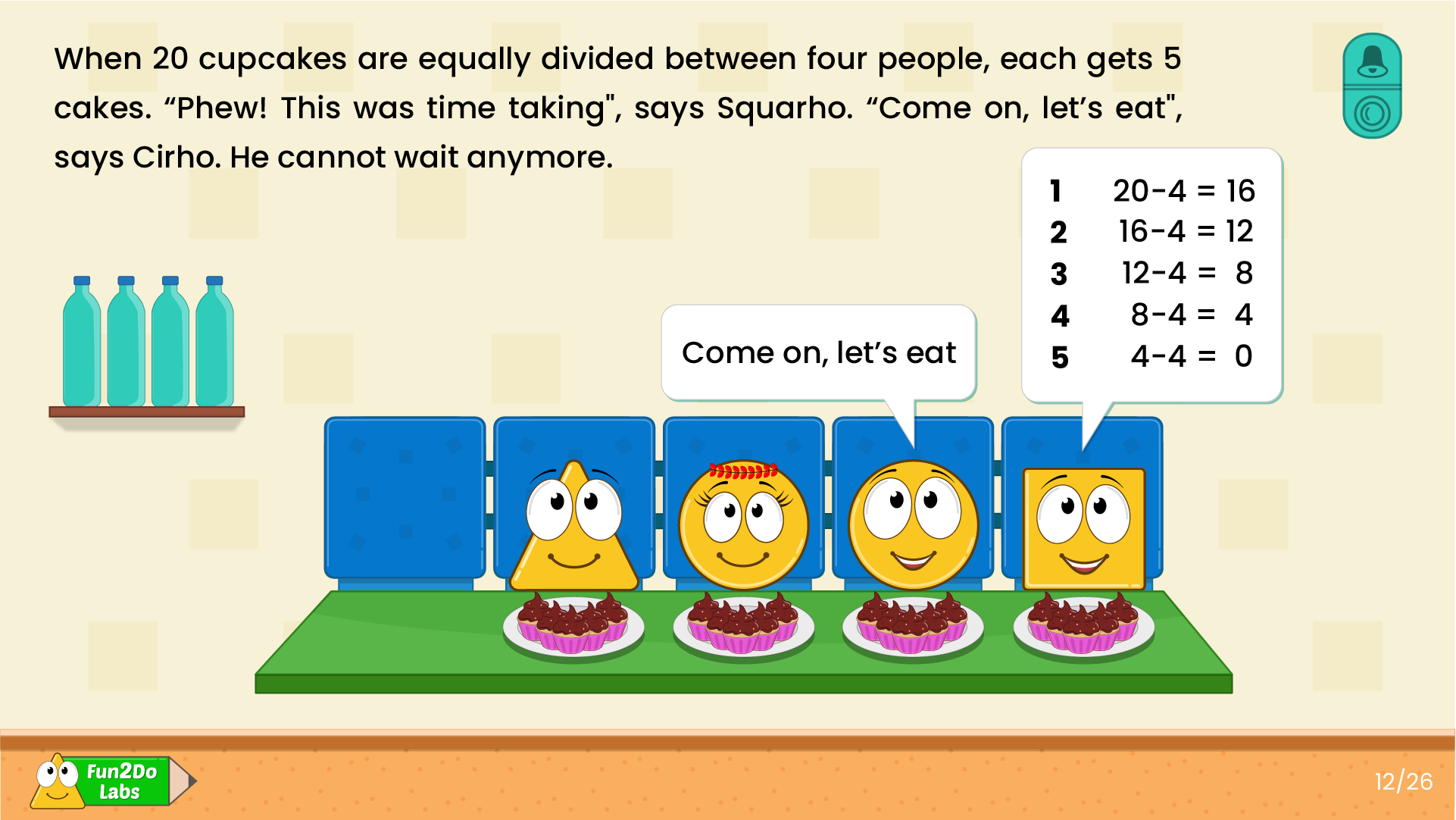 They are about to eat and Ding Dong! The doorbell rings once again. “Oh No! Who is it now?” says Squarho. He is losing his patience now.

“Hi!” greets Uncle Math. He has come to visit the kids.

“Hi, Uncle Math”, greet the kids together. “I have been looking for you all. What are you guys up to?” says Uncle Math. “We just came to meet Squarho and are about to eat his delicious cupcakes”, says Triho. “Wow! They look delicious. Can I have some too?” says Uncle Math.

“Of course”, says Squarho with a heavy heart. Despite being hungry, he is sharing the cupcakes with his loved ones. He has a big heart. “I like to be fair when I share”, he says, taking out one more plate. He then starts dividing the 20 cupcakes among the five people now. Can you guess how many cakes each will get?

“Uff! So confusing and time taking. Can somebody help?” says Squarho. The kids try to help him but fail.

“No fear when I am here”, says Uncle Math and quickly takes out a new gadget. “This is Mr Division. He will help us divide the cupcakes equally”, he says.

Mr Division scans the cakes and they get equally divided among the five plates. “Wow! Mr Division is so quick. Does he know any trick?” says Squarho. “Haha! Yes indeed”, laughs Uncle Math. 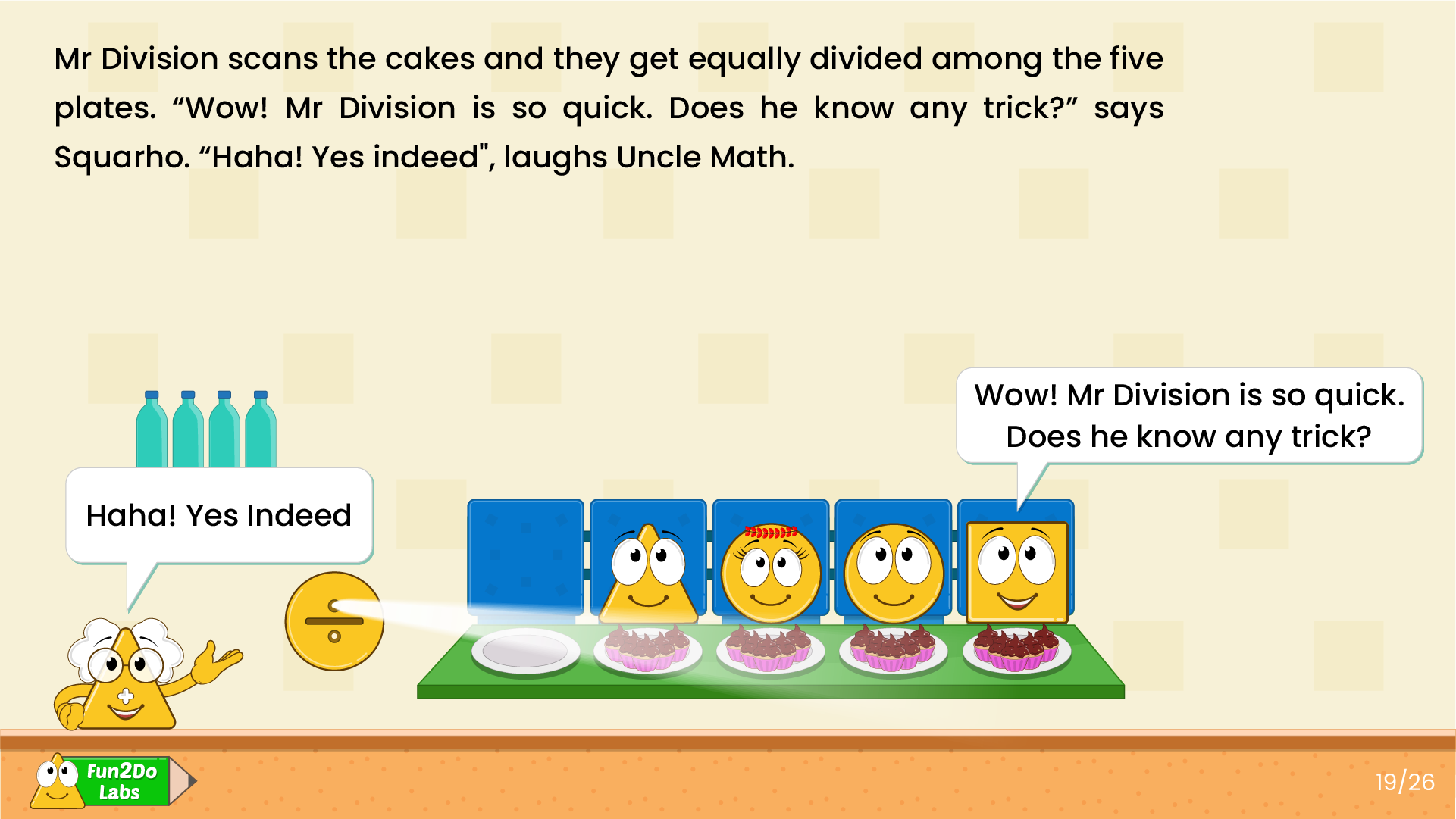 “You were distributing cupcakes repeatedly from the 20 until no cakes were left. This method of distributing equally is called division and is denoted as ➗”, explains Mr Division. But the kids do not understand anything.

Uncle Math decides to step in. He says”, Let us subtract 5 repeatedly from 20. How many times could we do this?” he says 4, says Triho immediately. “Exactly. We have to repeatedly subtract 5 four times so that 20 cupcakes can be divided equally among four people. This repeated subtraction is division. We show division using➗. I can equally divide 20 into groups of 5, four times”, explains Uncle Math. 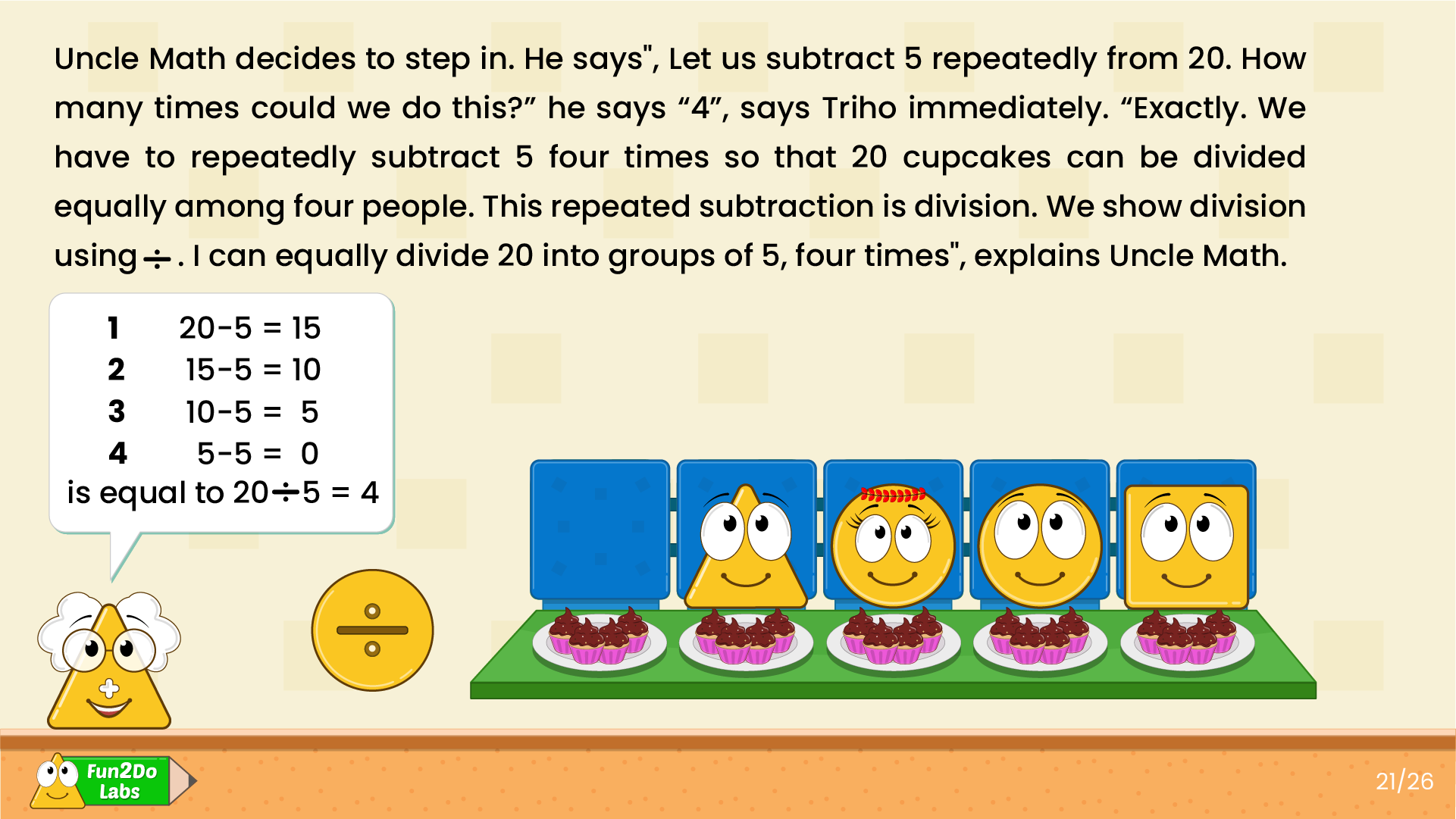 “Genius! Mr Division is a genius”, says Squarho. “Division is so simple yet fast. I will use this from now on”, says Triho. Everybody agrees. “Now can we eat the cupcakes please”, says Cirho. He cannot wait anymore. “Yes, yes”, says Squarho, and he hands over the plates to them.

“Yummy! These are so good”, says Cirha, taking a bite. “Squarho, you were so hungry, despite that you shared all your cupcakes with us. You’re awesome. But I am not hungry. You can have my share”, says Triho. Uncle Math and Cirha also give their share to him.

Squarho and Cirho eat and enjoy cupcakes. Everybody has a great time together. Like Squarho, would you also be fair when you share?