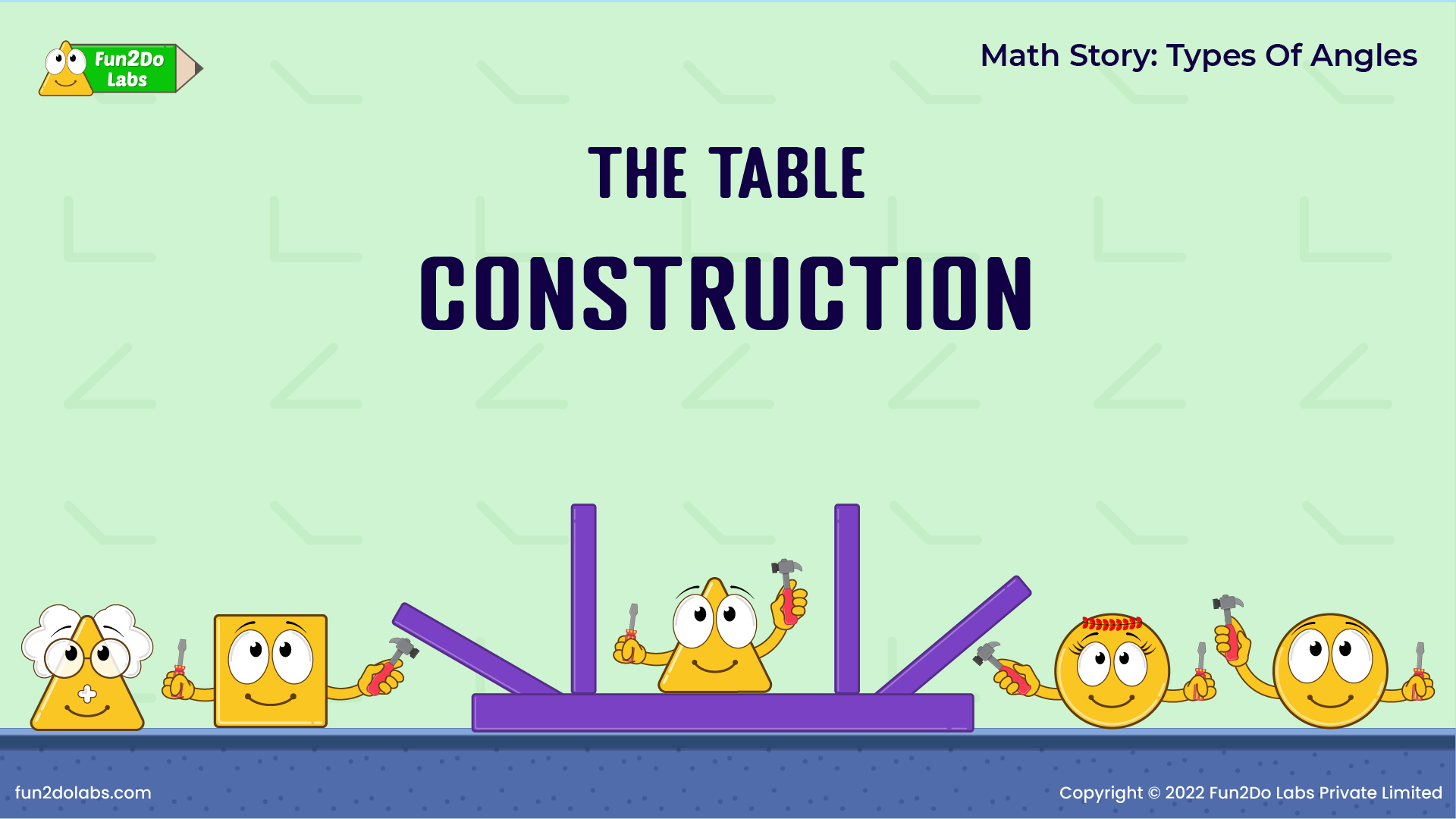 It is Monday morning, and Uncle Math’s table has broken. “Not a good start of the week”, he thinks. He has an extremely tight schedule for this week and has no time to fix the table. He decides to continue working to achieve his targets of research and inventions.

Clearly, Uncle Math is struggling without the table. His room is all messed up. 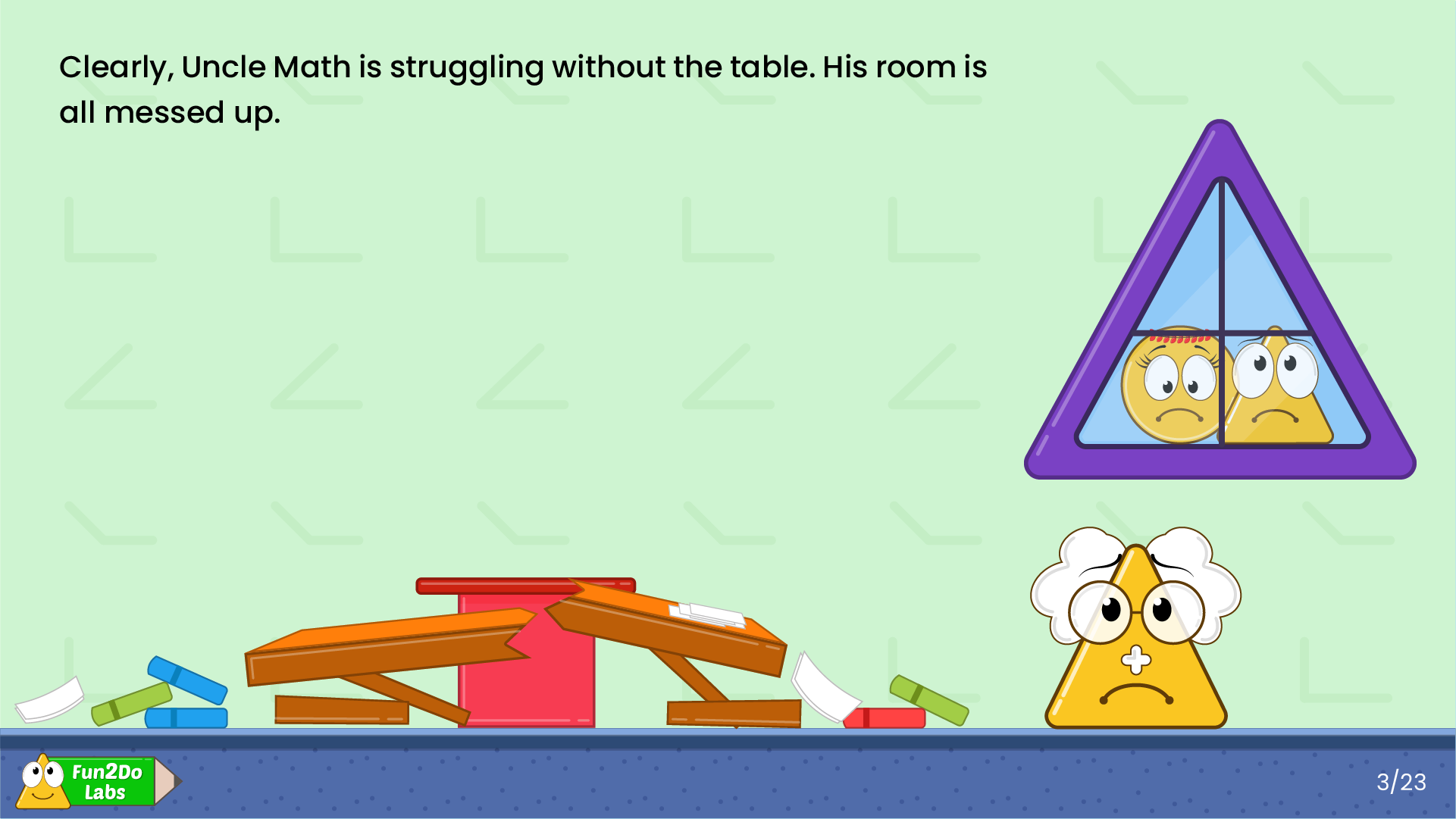 “Oh no! It is teacher’s day and our favourite teacher is struggling. We must do something to help him”, says compassionate Cirha.
Together, the kids are thinking of various ways to help him. “Let us buy a new table for him”, suggests Squarho. “But we do not have that much money”, says Cirho. What will the kids do now?

“Idea! Let us make a new table for Uncle Math. I do have some spare wood at home. Constructing a table will also be fun”, proposes Triho. Everybody loves his idea and decides to go ahead with it. They leave for Triho’s house.

“Alright! This big square can be the top of the table. And these narrow rectangles will be the legs of the table. Let us fix them now”, says Triho. Each of them decides to fix one leg of the table.

Tadaa! The table is ready. But why does it look so weird?

“Nobody will like a table of this kind,” jokes Squarho. “But what is wrong? We did nail the legs properly as well”, says Cirho. They try some other ways to make the table stand straight. 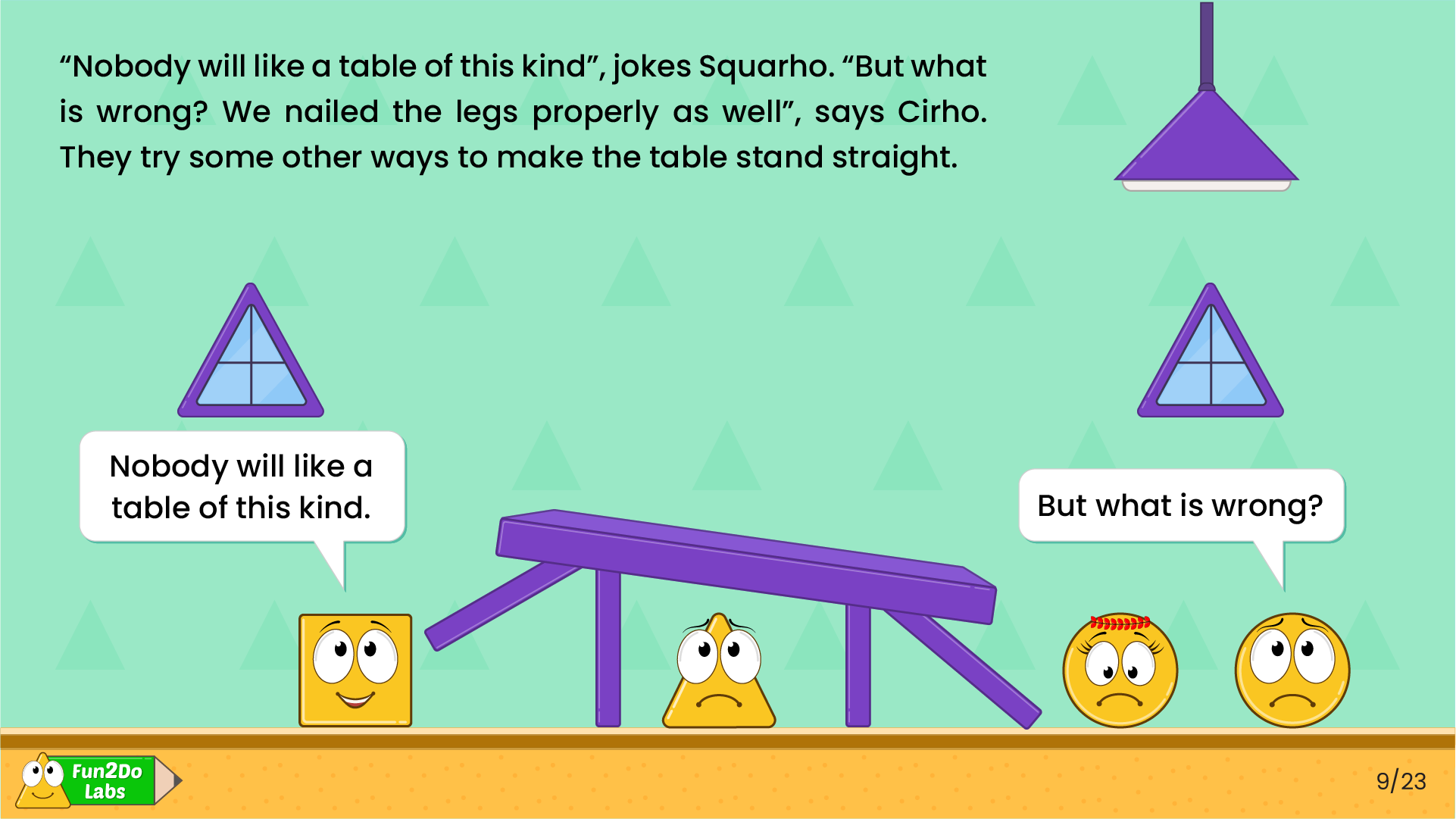 But nothing works. Can you identify what is wrong with the table? What can be done to make it stable?

They decide to take Uncle math’s help. “We were building a table for you. But our table looks so funny. Can you help us?” explains Cirha. “Haha! You all are so cute. Thanks for doing this for me. The table looks funny and unstable because of the wrong angle of the legs of the table”, says Uncle Math.

“An angle is formed when two lines meet at a shared point. Look here, the sides of the table form an angle. How we use specific units like cm, m, and km to measure lengths. Similarly, we use degrees (°) to measure angles. And we measure the angles using a protractor”, explains Uncle Math. 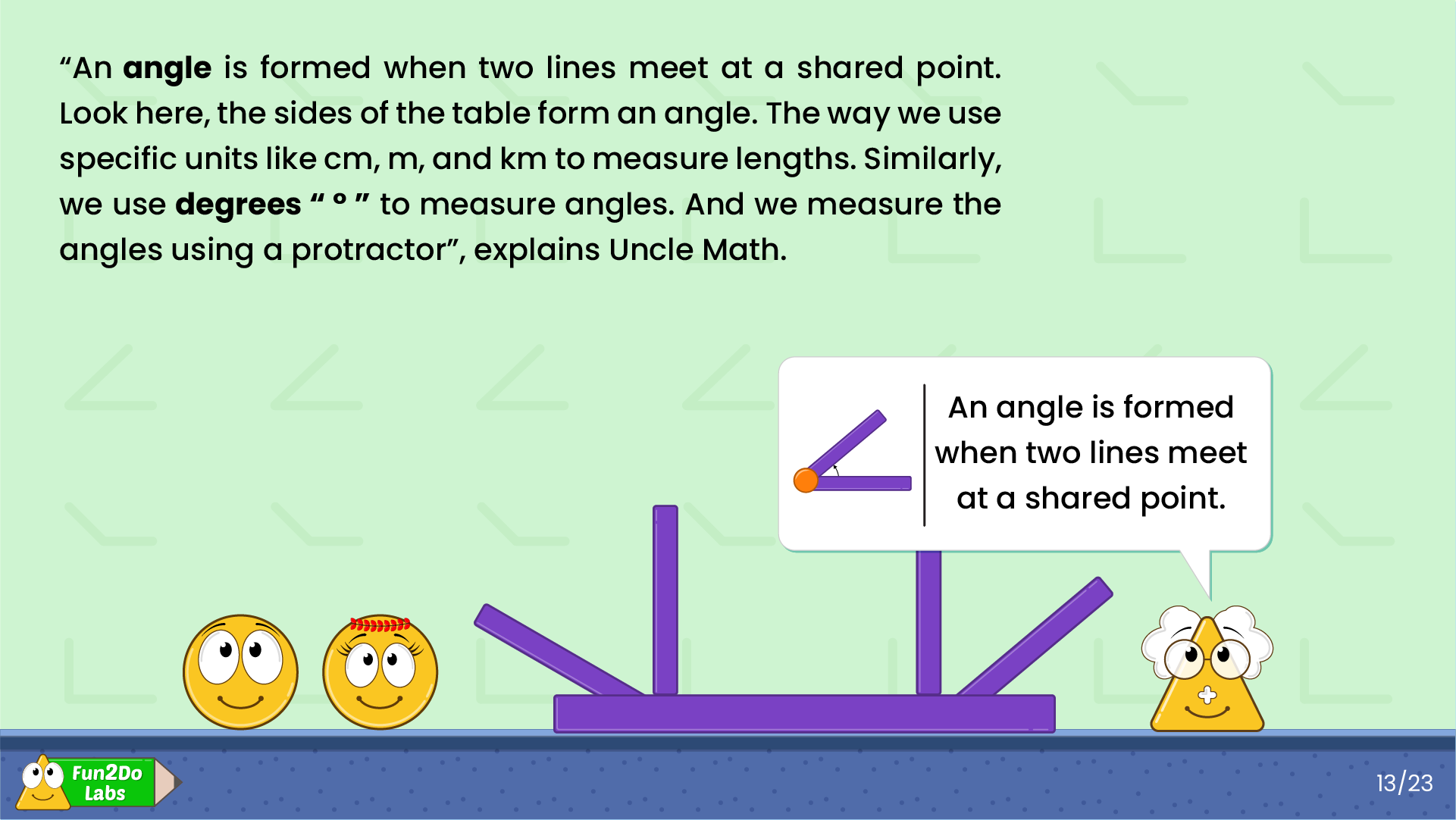 He quickly grabs Mr Protractor his new gadget to explain this to the kids. Mr Protractor has two flaps out of which one easily moves around. When Mr Protractor is opened, a curved scale with many small big lines and numbers appears. “What is that scale?” questions Cirho.

“This is the protractor. Now, I am going to place the fixed arm of Mr Protractor aligning it with one of the lines. Now I will drag the flap such that it aligns with the other line, it forms an angle. Can you measure this angle?” asks Uncle Math. “40”, reads Triho looking at the scale on Mr Protractor.

“Correct. We say 40° (40 degrees). Angles that are less than 90° are called Acute angles. They are small and cute”, says Uncle Math. “Oh! So my leg of table was forming an acute angle,” says Cirha. 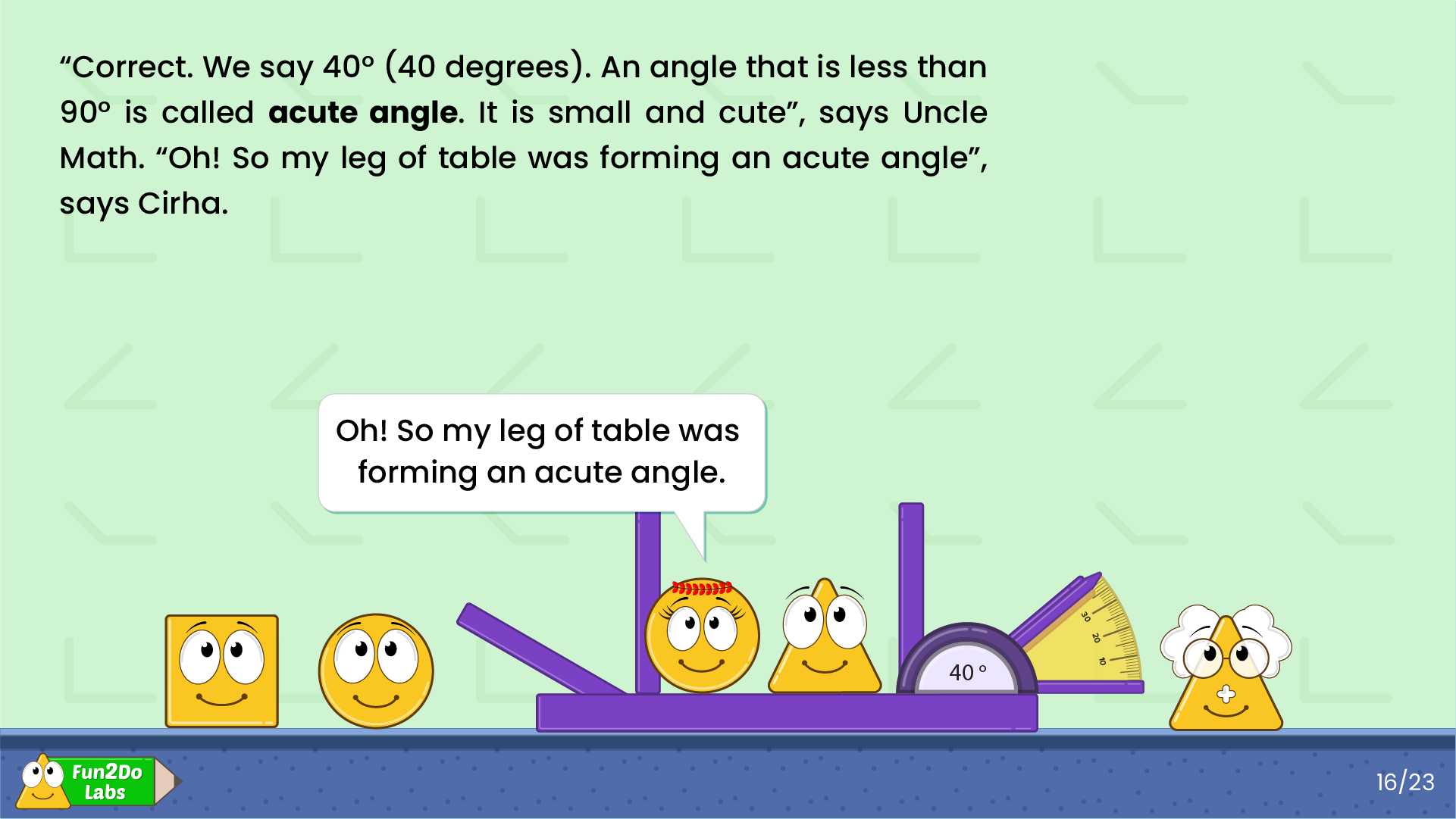 Similarly, Uncle Math decides to measure Squarho’s angle. He drags the open flap of Mr Protractor even wider this time. “So, this angle is big like Squarho ah! It is 150°. Such angles are called Obtuse angles. These are the angles that are greater than 90° and less than 180°”, he explains. 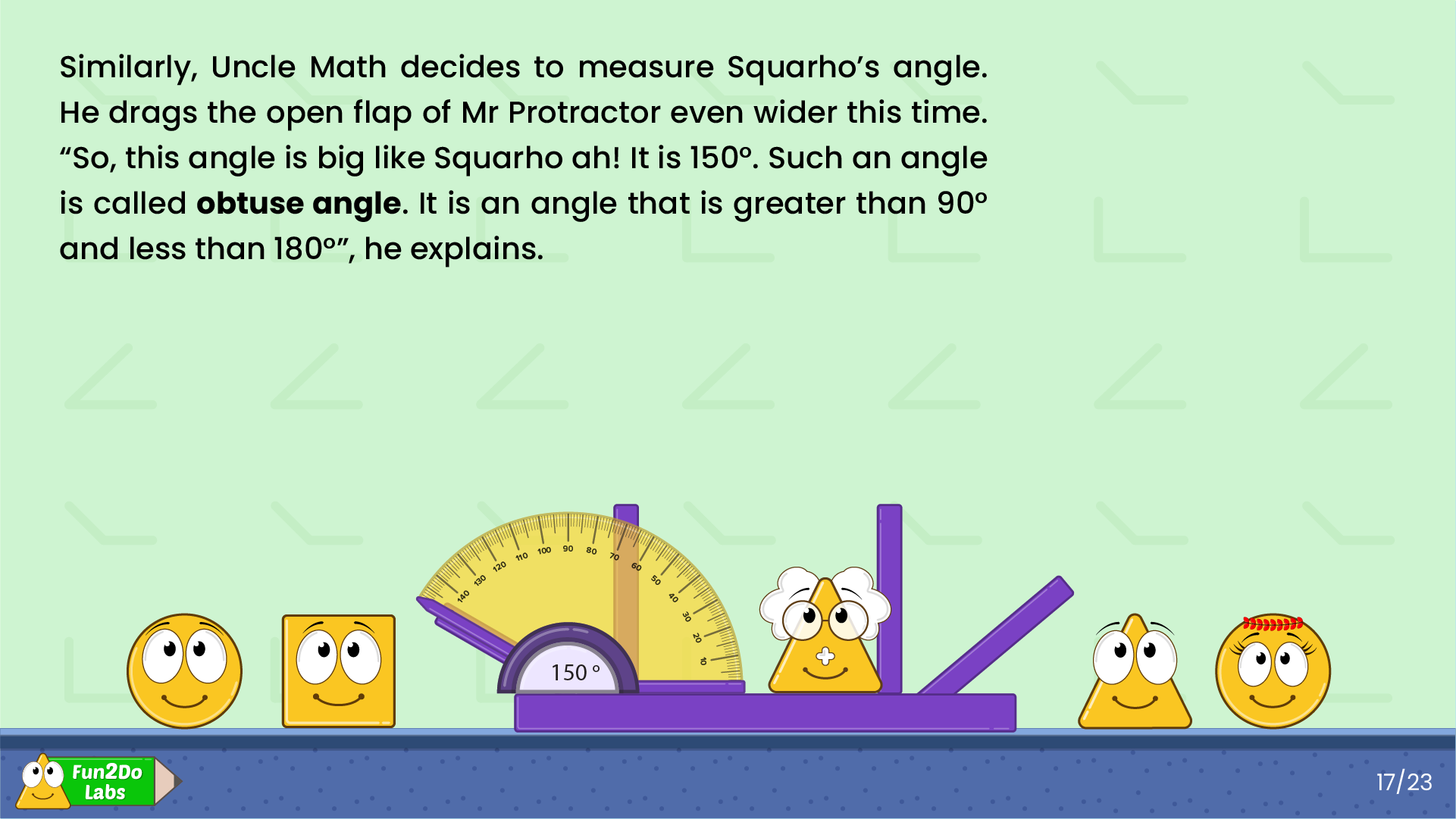 “But my angle is exactly 90°. What do we call this angle?” says Triho. “We call it the Right Angle. It looks like the letter L”, says Uncle Math. Strangely, the leg of the table at the right angle stands stable. What does that mean? 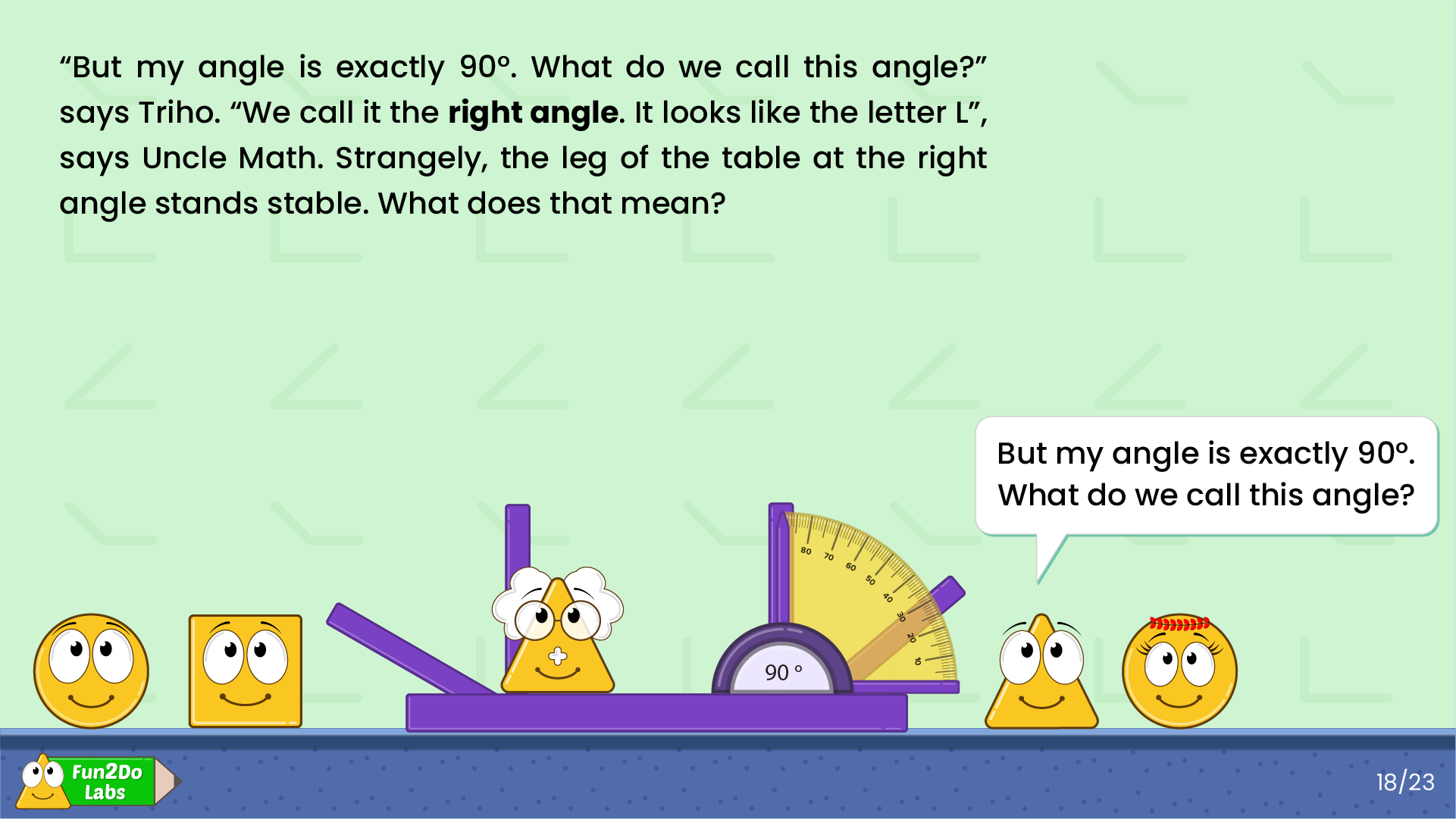 “Oh! So we had to nail the legs at the right angle to make them stand stable”, says Triho making connections. Uncle Math agrees with him. The kids decide to re-fix legs and this time at the right angles. Will the table be stable this time?

Voila! The table is stable now with all four legs at 90°. The kids also decide to add some more features to their special table so that Uncle Math likes it more.

“I love this table! This is awesome”, says Uncle math. Who might have guessed that the construction of objects involves accurate measurement of angles to make them work properly? A small mistake in the measurements might lead to unstable objects like the table. But the good intention to help people and accurate measurements of angles can take us a long way. Do you agree?