“No! No!” someone screams. But who? “Haha! This time Triho and Uncle Math will learn their lesson. This is my best revenge. Haha! ” shouts Asquarho Boss. But what is he up to? Why is Cirha screaming?

Oh no! Asquro Boss is kidnapping Cirha with the help of his gang. She looks terrified. “Triho! Uncle Math! Help me!” she screams. Will Triho and Uncle Math save her?

Hearing her screams, Triho and Uncle Math run to save her. But Asquarho Boss and his gang quickly board their evil spacecraft along with Cirha and are trying to run away. “It is going to be a long, long and a very long journey this time. Catch me if you can. Haha!” says the boss, and they leave.

Fast, fast, faster! They follow ATriho Boss and his spacecraft. Soon they cover 100 km. Still no trace of Cirha. How will they find her?

Fast, fast, faster! They travel as fast as possible. But Triho notices something on the distance calculator. It shows a number that has 4 digits. “Oh, God! A number with an extra zero with a hundred? What type of number is this? How do I read this?” he questions.

“Haha! This is read as one thousand”, says Uncle Math. “How a hundred has 3 digits in ones, tens and hundreds place. Similarly, when we add a fourth digit, it adds another place called a thousand”, he adds.

“A 5 digit number with an extra zero to thousand? How do I read this?” questions Triho. “This is read as Ten Thousand. It has an extra place along with ones, tens, hundreds, thousands and ten thousand”, explains Uncle Math.

Having no trace of Asquarho Boss and Cirha even after travelling so much, Triho is worried. “I hope Cirha is fine,” he says as he misses her. “Dear, do not worry! We will find them soon”, says Uncle Math. They continue their journey hoping to locate Cirha soon.

“Wow! A 6 digit number on the distance calculator. It has an extra zero to ten thousand. How do we read such numbers?” asks Triho. “This is One Lakh! This has places for ones, tens, thousands, ten thousand and lakh”, says Uncle Math.

“One lakh! This sounds huge. Is this number greater than ten thousand?” questions Triho. “Haha! Yes, dear. As the number of digits increases, the number also becomes greater and greater”, explains Uncle Math.

“Oh my god! We have travelled so much already. The distance calculator is showing a 7 digit number now”, says Triho, noticing the reading on the calculator. “This is Ten lakhs. This has ones, tens, thousands, ten thousand, lakhs and ten lakh places”, says Uncle Math.

Suddenly they spot a spacecraft far a distance. “Look there! That is Asquarho Boss! Let us chase them”, says Triho. Uncle Math increases the speed to chase them faster and faster.

Asquro Boss and the gang also spot them chasing. They get faster and faster. But Triho and Uncle Math are very close to them and are about to attack them. “Arggh! You found me, but you will never be able to save your friend”, says the angry Asquarho Boss, and he shoots fireballs at them. Will Triho and Uncle Math be safe?

“Careful”, says Triho as Uncle Math tries to miss hitting the balls. The bad robots continue showering the fireballs at them.

Suddenly, Asquarho Boss changes his route. He lands on an unknown planet. Triho and Uncle Math follow him.

Asquarho Boss attacks Triho with his powerful laser gun. Brave Triho responds with a stronger laser attack. Uncle Math tackles his gang members. Bam! Crash! Whoop! This goes on for a while! Who would win this?

Asquarho Boss could not stand against the strong team of Triho and Uncle Math. They run away for their lives. Cirha is finally free.

Cirha runs and hugs Uncle Math and Triho. They finally could save her. It is time to get back home.

“Wow! An 8 digit number. Cirha, see you made us travel this far”, jokes Triho. “Haha! This is One Crore. It has ones, tens, thousands, ten thousand, lakhs, ten lakhs and crore places”, says Uncle Math.

“No fear when I am here! We will have lots of fun”, says Uncle Math as they board their spacecraft and leave. A true friend is a friend in need whether you have to travel for Thousand, Ten Thousand, Lakh, Ten Lakh and Crore kilometres for that. 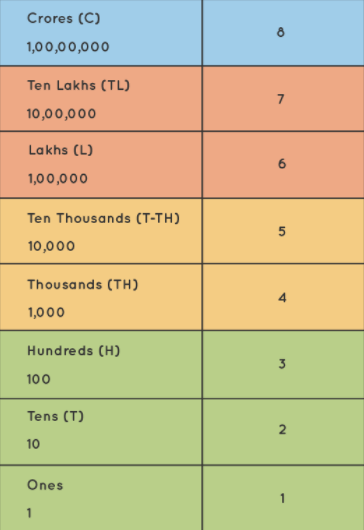