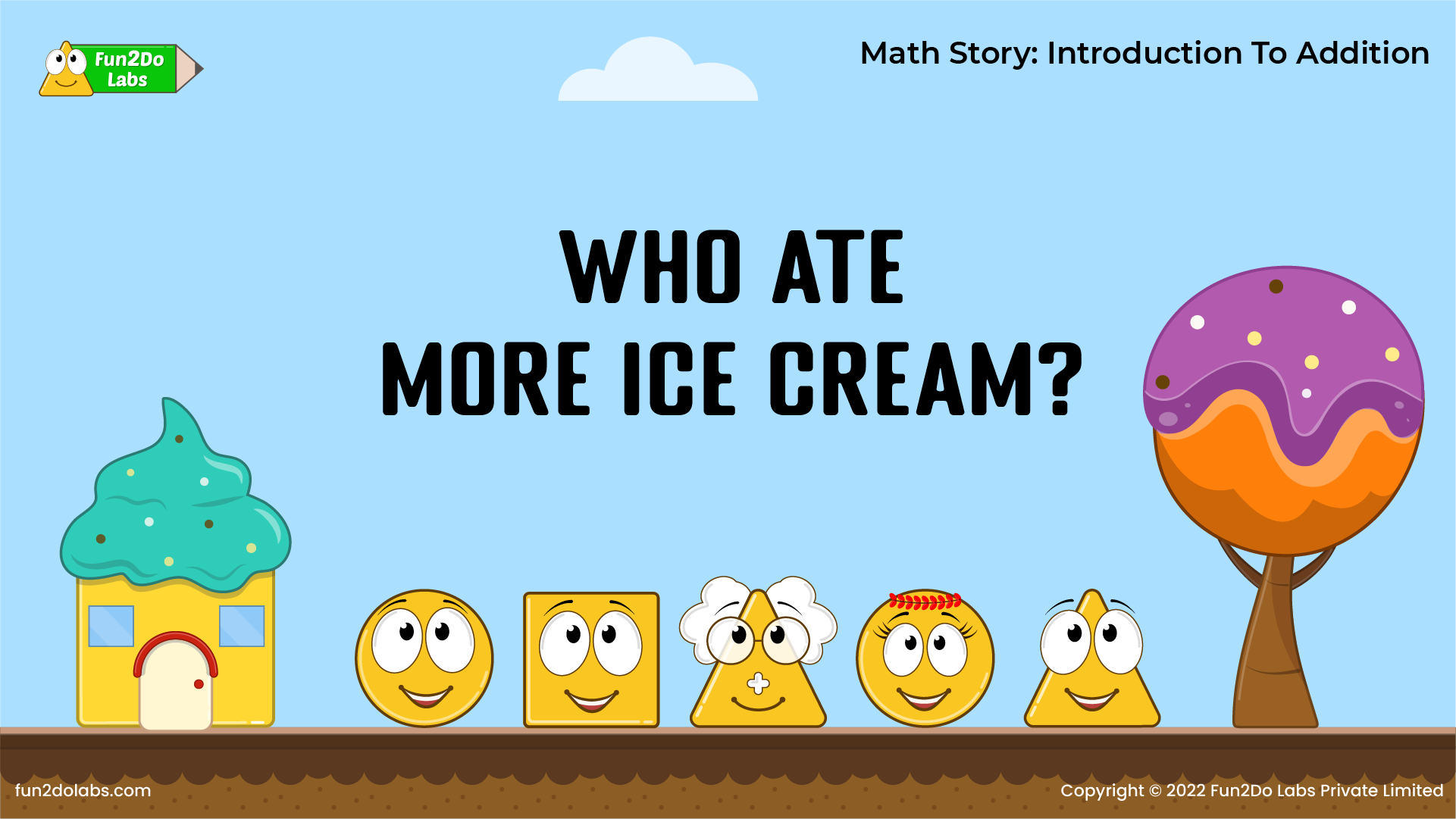 Squarho is fond of Ice cream. As a surprise, Uncle Math decides to take Squarho and his friends to a bright and colourful Ice Cream Land.

“Woohoo! So much Ice cream!” screams Squarho excitedly. The colourful Ice Cream houses, trees, and other objects tempt the kids. 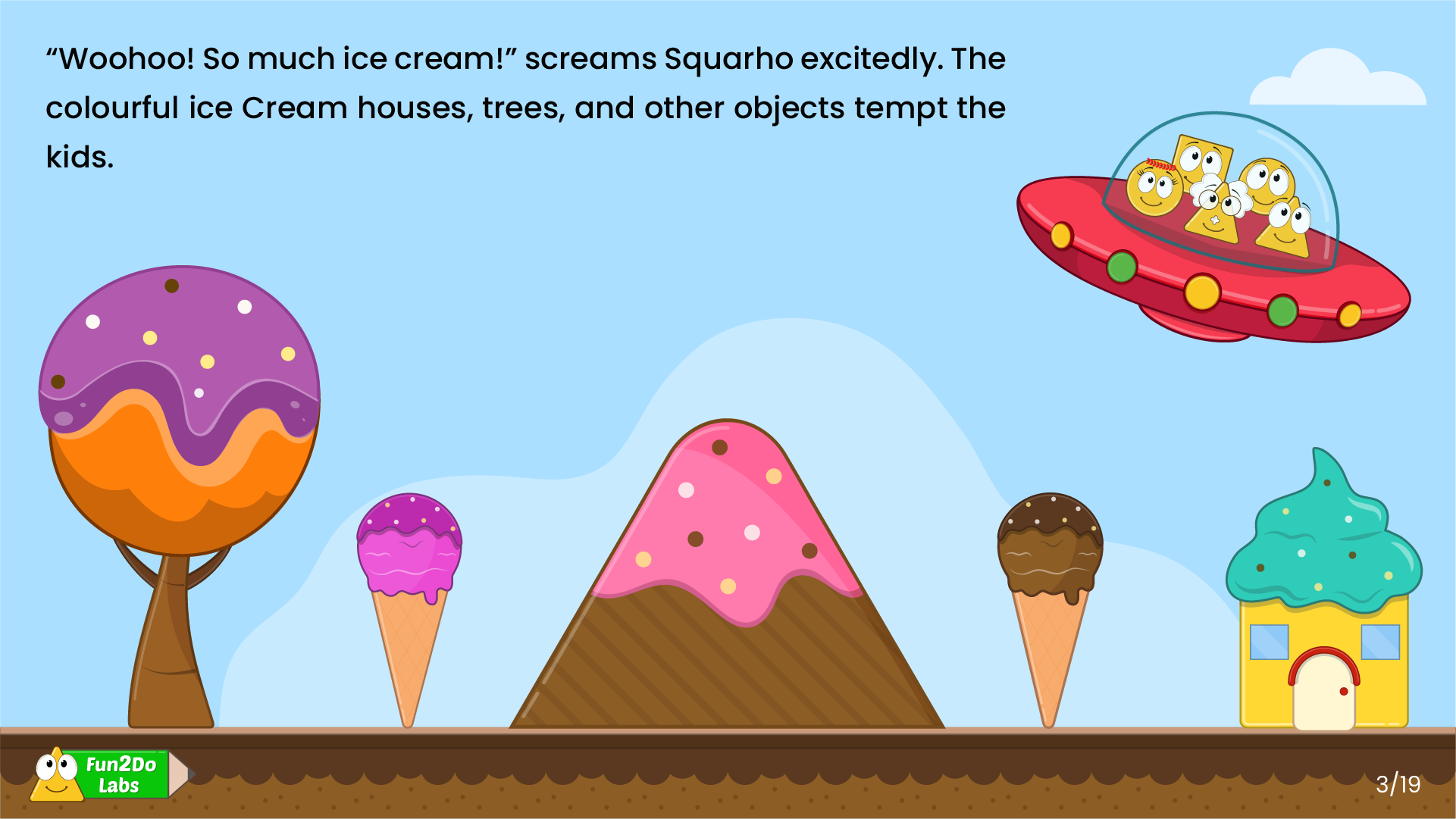 First, they eat some pink ice creams and move forward.

“I am so full. I cannot eat more”, says Cirha and decides to rest. Others agree and join her. Meanwhile, “ I am sure I ate more ice creams than all of you”, says Squarho proudly.

“No, I  ate more!” shouts Cirho. Triho and Cirha say that they ate more ice creams. This initiates a fight between them. Squarho loses his calm.

He starts screaming and hitting himself in anger. “Calm down, Squarho”, says Uncle Math. But nothing seems to work. 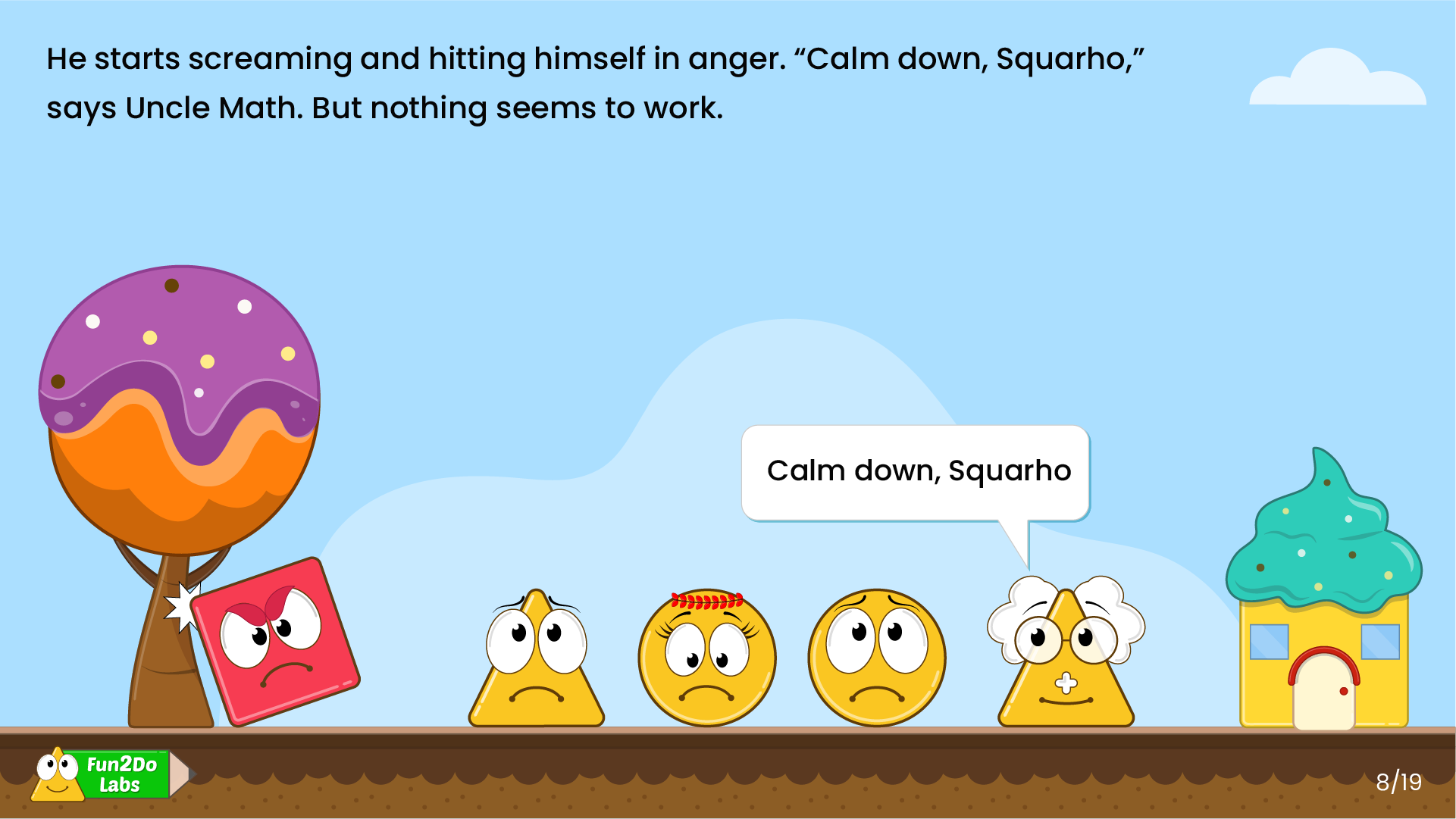 He then asks Squarho to take a deep breath and count from 1-10 backwards. Voila! Squarho is calm and normal now.

Uncle Math helps the kids in deciding who ate more ice cream. Starting with Triho, he asks, “How many Ice creams did you eat?”

“Umm… I ate 3 pink ice creams first and 2 brown ice creams later. But, how many did I eat altogether?” says the confused Triho.

Taking some pink and brown ice creams Uncle Math explains, “ So you ate these 3 first and these 3 more later. Now can you tell me how many you ate altogether?”

“Well done! This method of putting two or more things together is called Addition. We show addition using the “+” plus symbol. So, we say 3 ice creams plus 2 ice creams is equal to 5 ice creams.” adds Uncle Math. 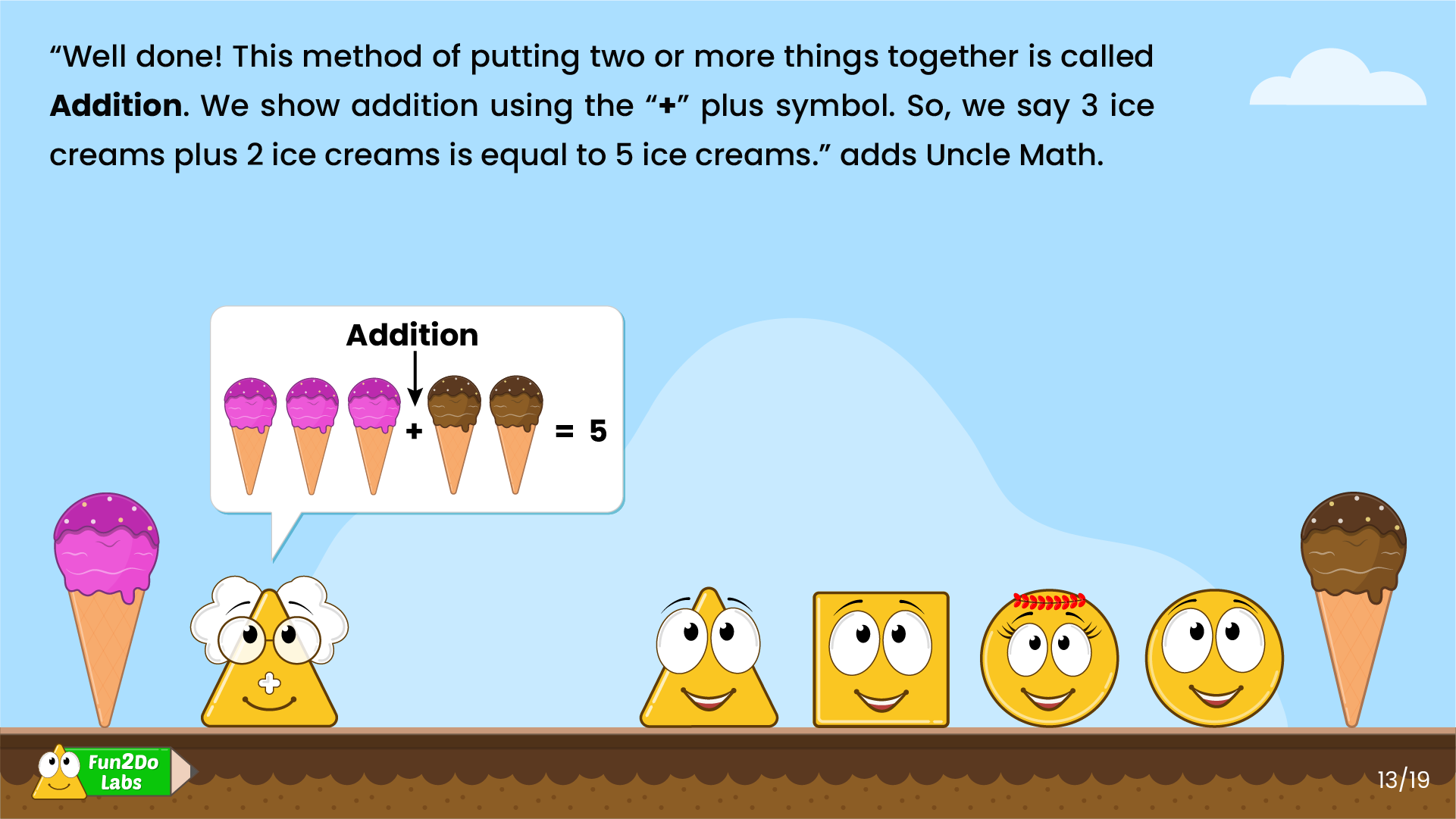 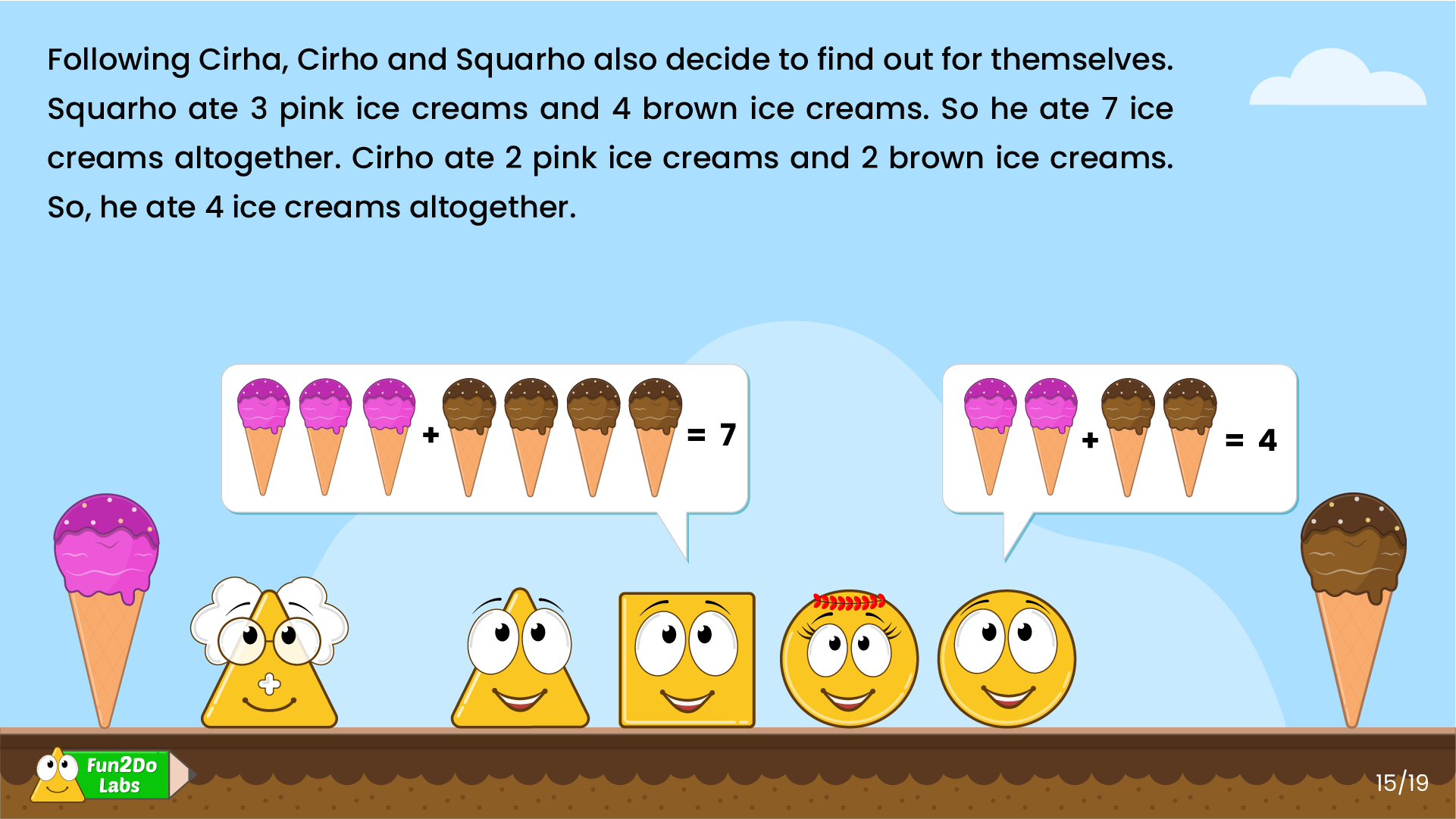 Squarho is elated. He apologizes for his bad behaviour and thanks to Uncle Math for teaching him a simple anger management trick.

They quickly board their spacecraft and fly back home. On the way, Squarho gets angry again. Cirha asks him to count 1-10 backwards. Everybody bursts into laughter. Tempting ice creams, a simple anger management trick to staying calm and addition to the rescue, an adventurous day indeed.